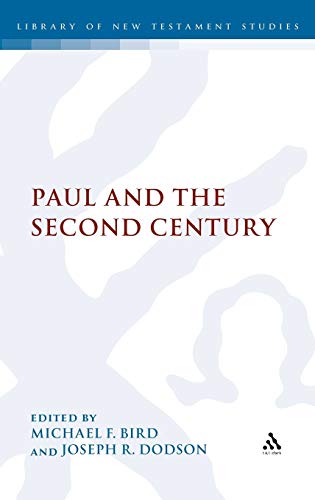 Paul and the Second Century

This volume brings together thirteen essays exploring the “variety of ways that Paul was received, interpreted, and even used in the second century” (p. xi). As Michael Bird explains in the preface, “Currently studies in Wirkungsgeschichte are in vogue, a new scholarly ‘pink’ if you will” (p. xi). While the term Wirkungsgeschichte (typically translated “effective history”) may not be familiar to some, there are reasons to believe that this trend in scholarship will not go out of fashion anytime soon. Moreover, as the volume stresses, such study can often lead to new insights into Paul and his letters. Thus, this volume should interest not only students of early Christianity but also students of the NT and Paul in particular.

The contributions are set forth roughly in chronological order. While some address a specific topic, most consider Paul’s influence on particular second-century figures or literary works. An up-to-date and useful introduction, written by Joseph Dodson, delineates the question of Paul’s influence in the second century. Then Dodson provides a much more extensive summary of the volume than what will be possible here (pp. 10–17).

In the first chapter, Stanley Porter lays out five theories regarding the formation of the Pauline canon before offering his own. Porter’s discussion draws largely upon his own previous work, as he acknowledges (see pp. 21–22n12). In the second chapter, Carl Smith discusses how Paul influenced Ignatius. He examines the nature of the evidence and analyzes four theological topics: Christology, Jewish practices among the followers of Jesus, the role of the bishop in the Christian church, and suffering and martyrdom. Michael Holmes’s chapter on Polycarp’s letter to the Philippians is structured by Daniel Marguerat’s categories of “Paul as writer,” “Paul as remembered,” and “Paul as theologian.” (Does Holmes’s use of these categories undermine Blackwell’s claim on p. 191?) Holmes’s essay also somewhat repackages previous work. Michael Bird’s essay provides “an expansive list of Pauline intertexts” in the Epistle to Diognetus, classifies them as citation, allusion, or echo, and finishes with some remarks “as to how Paul shaped the theological texture and rhetorical dynamics” of the epistle (p. 73). Bird concludes that the Epistle to Diognetus “stands within a Christian Hellenism that was very probably the same seedbed from which Christian Gnosticism grew” but argues that the Paulinism of the epistle “cannot be a Gnostic Paulinism” (p. 89).

In the fifth chapter, Todd Still introduces Marcion and Marcion scholarship, but his own comparison of Marcion’s thought and praxis with Paul’s is only about two full pages. Still’s disagreements with Sebastian Moll could also have received more substantiation. Nevertheless, for those who are unfamiliar with the field, this could be a helpful place to start. Paul Foster’s task in the sixth chapter is mostly negative. After examining a sampling of the parallels between Justin and Paul that have been proposed in scholarship, Foster concludes that there are “wide discrepancies in the arguments these texts are used to support as well as differences in the contextual ideas of the respective passages. This makes the case for literary dependence unlikely” (p. 124). In the seventh chapter, Nicholas Perrin seeks to demonstrate the importance of Paul to second-century Valentinians. He considers Valentinus himself and Theodotus and then the Prayer of the Apostle Paul and the Apocalypse of Paul. In a relatively long eighth chapter, Joel Willitts seeks to bring greater methodological precision to the question of whether second-century Jewish Christians rejected Paul. He first defines “Jewish Christianity” and then persuasively argues that “Jewish Christianity in the second century is not essentially anti-Pauline as has been thought” (p. 167).

Andrew Gregory’s essay introduces the reader to the Acts of Paul and then considers its sources and models. The portrayal of Paul in the Acts of Paul is broken down in four constituent parts. Gregory makes interesting comparisons to portrayals of Paul in the Pauline letters and Acts. In the tenth and eleventh chapters, Ben Blackwell and Andrew Bain consider the appropriation of Paul and his letters in Irenaeus and Tertullian, respectively. Blackwell demonstrates how Irenaeus was “an interesting and historically significant interpreter of Paul” (p. 206). Bain’s chapter is almost entirely descriptive as only 17 of his 111 footnotes contain any reference to secondary literature. Pauline Nigh Hogan then treats the issue of Paul and women in second-century Christianity. In my opinion, her assessment of Paul’s influence handles the evidence too simplistically as her working assumption seems to be that the adoption of conventional gender roles among Christians is due to the influence of the Greco-Roman social world whereas the adoption of unconventional gender roles is due to the influence of Paul. In the final essay, Mark Elliot briefly treats four major theologians as interpreters of Paul: Irenaeus, Clement, Tertullian, and Origen. He advances the provocative claim that “the anti-Marcionite Paul of c. 200 c.e. looks not dissimilar to the Paul of the New Perspective of the late twentieth century and even to the philosophical Paul of the early twenty-first” (p. 256). Indexes of ancient sources, modern authors, and ancient figures complete the volume. There is no separate bibliography section.

This wide-ranging volume is worthy of more sustained interaction than this review can offer. Bird and Dodson have collected a number of fine essays from an international cast of scholars. The volume will undoubtedly serve as a helpful reference for years to come.