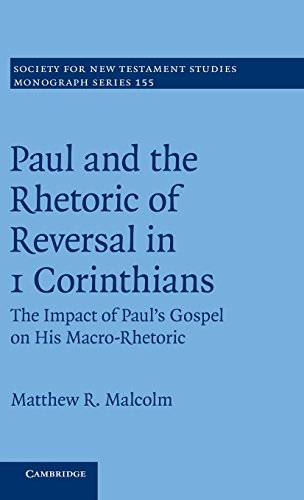 Paul and the Rhetoric of Reversal in 1 Corinthians: The Impact of Paul’s Gospel on His Macro-Rhetoric

The letter of 1 Corinthians is greatly discussed within New Testament scholarship. One of the matters that needs resolution is its arrangement and central theme. In other words, is there any particular reason as to why Paul begins with wisdom, proceeds to sexual immorality, then on to weak and strong brothers, the use of spiritual gifts, and then concludes with the resurrection? Is he addressing the greatest needs at Corinth first, or is there some reason as to why he has arranged the letter in this way? Several scholars have seen these issues within 1 Corinthians to be unrelated while others find a continuity of thought. Matthew Malcolm proposes that it is the nature of Paul’s preached message that accounts for the movement from cross and sacrifice to resurrection. He believes that this provides the better explanation over appeals to Greco-Roman rhetoric or Jewish literary methods.

Malcolm’s argument proceeds in the following manner. In his first chapter he presents the message of reversal. It was something that was found within ancient Jewish sources such as portions of the OT like Psalms and Daniel. It continues, however, within intertestamental literature such as Judith, Wisdom of Solomon, 2 Maccabees, 1 Enoch, Philo, and Josephus. Malcolm then proceeds to show that this continues within Christian literature such as the Gospel of Mark, Acts, in Paul’s biography, and in letters such as Romans, 2 Corinthians, Philippians, and Colossians. This theme is found clearly in 1 Cor 1–4 and then in 1 Cor 5–14 in which the believer lives out the cross. First Corinthians 15 then provides the promise of reversal. With this as a backdrop, Malcolm concludes that Paul is calling the Corinthians to change from playing the role of the boastful ruler and to take the place now of the cruciform sufferer.

In the second chapter, Malcolm compares his viewpoint of the macro-rhetoric of 1 Corinthians in relation to other scholarship. Some other Corinthian scholars such as L. L. Welborn do not see 1 Corinthians as a unity. Others such as Jean Héring and Walter Schmithals do not see a unified literary coherence in 1 Corinthians. Still other scholars such as Harry Gamble, Gerhard Sellin, and Robert Jewett believe that there is evidence of an editor within the final composition of the epistle. By appealing to First Clement, a letter that used ideas from 1 Corinthians, Malcolm convincingly dismisses the objections of these scholars. He then proceeds to consider those scholars who have seen unity within 1 Corinthians from the perspective of Greco-Roman letter forms, rhetorical criticism, and pastoral rhetoric. He also addresses those who view the letter from a unified situation behind 1 Corinthians and a theological unity. In this part of the chapter he refers to many well-known scholars within 1 Corinthian studies such as Winter, Witherington, Rosner, Mitchell, Fee, Schrage, Bailey, Hurd, and Thiselton. Malcolm rightfully agrees that Paul’s theological background provides the response to the situation that is at Corinth. He particularly emphasizes that Paul’s theological heritage has been renegotiated in the light of the Christ event. This development propels further the discussion of theological unity within the letter.

In the third chapter, Malcolm examines the first four chapters of 1 Corinthians. He sees John Chrysostom as providing a valuable model to illuminate a socio-historical background behind 1 Corinthians. The author also finds Chrysostom as helpful for the modern reader to understand Paul’s pastoral evaluation of the situation at Corinth. As a result of examining Chrysostom’s writing, Malcolm concludes that the situation involves boastful, obsessed, human autonomy that needs to be countered with the standing of being in Christ. It is a helpful perspective for understanding Paul to consider Chrysostom’s viewpoint. While Chrysostom was a student of Paul and a preacher of 1 Corinthians, it is less clear why Chrysostom would be particularly considered over other interpreters from the early church.

Malcolm then moves on within his next chapter to examine 1 Cor 5–14. By examining the ethical matters within these chapters in relation to other Pauline sections (cf. 1 Thess 4; Gal 5:19–23, 2 Cor 12:20–21; Phil 3:17–4:9; Rom 1; 12–15, etc.) and disputed Pauline sections (Col 3–4; Eph 2, 4–6; Pastorals), Malcolm finds that Pauline ethics progress generally from correcting passionate desires such as sexual immorality, greed, and impurity, to interpersonal service and love within the church. He claims, “Those who are brought into union with Christ in his bodily accomplishments are called to offer their bodies selflessly to God through Christ, and participate lovingly within the body of Christ” (p. 169). Throughout the chapter Malcolm engages with those who have investigated Pauline ethics such as Burridge, Countryman, Furnish, Hays, Horrell, Klawans, Lohse, Meeks, Rosner, Schrage, and Thompson. He rightfully finds that 1 Cor 1–4 exerts influence within 1 Cor 5–14. The ideas of the cross found within 1 Cor 1–4 are now applied ethically to sexual immorality, greed, and bodies that belong to the Lord. He also agrees that Jewish themes from the Torah can be found throughout these chapters within Paul’s writing.

Finally, Malcolm considers 1 Cor 15. In this chapter, he examines the micro-rhetorical flow and the macro-rhetorical function of the resurrection discussion. Both Chrysostom and Calvin express consternation as to why Paul places the resurrection last within this epistle. Malcolm finds Paul returning to the dual reversal ideas as found in 1 Cor 1–4. He advances the idea that the writing is enlightened by the culturally recognizable ideas of celebration of the present body and the assumption of the inferiority of the dead. These can be found within first-century Stoicism, Epicureanism, and inscription evidence. He then argues that Paul is reversing these ideas, challenging the Corinthians who are denying the resurrection of the body. Paul places this chapter last because it is the ultimate denial of the Christian perspective.

Malcolm’s approach is in contrast to the topically organized approach in the chapter advanced by Holleman, Garland, and Johnson, the conventional rhetorical approach proposed by Watson, Thiselton, and Wegener, and the chiastic organizational approach proposed by Welch, Hull, and Bailey. Malcolm concludes that the resurrection functions as a climax to the macro-argumentation of the epistle since it is the ultimate expression of the gospel.

Paul and the Rhetoric of Reversal in 1 Corinthians contributes significant data to the question of the coherence and arrangement of the epistle. It rightly accentuates how Paul’s message of the crucified and risen Messiah provides a key theme for considering the arrangement of the entirety of the letter. It also rightly encourages a theological and pastoral consideration of the letter. It will be of great interest to those working in Pauline theology, Corinthian studies, and rhetorical studies.

It would be helpful if Malcolm had drawn further conclusions about the influences upon Paul within this letter. Some scholars view Paul as being more influenced by Greco-Roman thought, Jewish thought, or Christian thought. While Malcolm sees Paul’s kerygmatic message of Jesus crucified and resurrected as critical for the epistle, he does note substantial overlaps with Jewish and Greco-Roman thought. Some further development of the relationship between Paul’s kerygma and Jewish and Greco-Roman thought would enhance a good study. Further work also on the cross and resurrection would further support the claim that this is indeed the macro-structure of the letter.