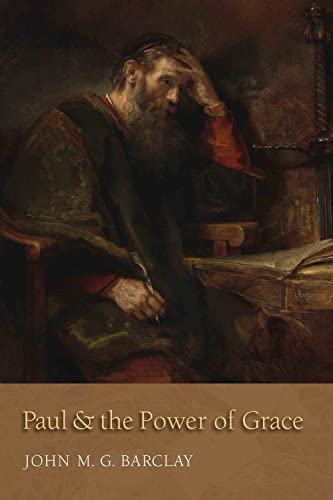 The first nine chapters of Paul and the Power of Grace provide readers with a significantly shorter presentation of the main arguments found in Barclay’s previous work, Paul and the Gift (Grand Rapids: Eerdmans, 2015). While this new, shorter work is meant to be a popular level version that distills the main findings of the larger work for a wider audience, Barclay does expand on the original in chapters 10 through 13. The main expansion is that Barclay begins to explore other letters of Paul in addition to Galatians and Romans. All in all, this work is a valuable resource as an entry level introduction for those who have not read Paul and the Gift and as a refresher with some added material for those who have.

Paul and the Power of Grace is a study of the concept of grace in Paul that places the theological notion of grace within the anthropological category of gift. By “gift” Barclay means “the sphere of voluntary, personal relations characterized by goodwill in the giving of a benefit or favor, which generally elicits some form of reciprocal return that is necessary for the continuation of the relationship” (p. 2). Because Paul views God’s action in Christ to the world as a gift, Barclay wants to determine what kind of gift is the Christ-gift.

This taxonomy, laid out in more detail on pp. 13–17, has incredible explanatory power. Not only can it help illuminate Paul’s own theology of grace, it can also help “clarify some of the major disagreements on the topic of grace in the course of Christian theology” (p. 17).

After a quick examination of the various expressions of grace in the writings of some of Paul’s Jewish contemporaries (pp. 24–37), Barclay begins the main part of his study, an examination of the letters of Galatians (pp. 38–74) and Romans (pp. 75–113). While making many exegetical decisions along the way—for instance, Barclay argues that “works of the Law” refer to observance of the Mosaic Law, he takes a forensic view of justification, and he argues for the objective genitive of πίστις Χριστοῦ (p. 48)—ultimately Barclay argues that the central conviction of Paul’s theology of grace is that the Christ gift, “the definitive act of divine grace” (p. 40), was an incongruous gift; the gift was given without regard to the worth of the recipient. Divine benevolence, however, does not leave recipients how it found them. On the contrary, grace works to transform unworthy recipients into fitting beneficiaries, even if it never fully accomplishes this transformation in this life.

In Barclay’s new material in Paul and the Power of Grace, he argues that incongruity, rather than being one theme among many in Paul, is “the structure or pattern of the leading ideas in Paul, what we might call the grammar of his theology” (p. 114). Barclay, therefore, expands his argument to the other undisputed Pauline letters. This incongruous grace of God, which brings with it strong expectations (i.e., it is unconditioned but not unconditional), also works to create communities of believers that then show the grace of God to one another and to outsiders.

Barclay makes a significant and helpful contribution to the world of Pauline theology. His taxonomy should help move the conversation forward from entrenched debates that are the result of using the same language but meaning different things. This is particularly helpful in showing the differences between the New and Old perspectives on Paul. Even though Paul and the Power of Grace is around 423 pages shorter than the fuller treatment, this new work still provides profound insight into Paul’s theology of grace. Most issues with the work come in the details. For instance, Barclay does not hold to the Pauline authorship of certain letters. This will impact his view of grace in Paul because his corpus of letters is now limited. He also makes vague and potentially troubling comments regarding gender and sexuality in Paul (pp. 152–53). Finally, Barclay seems to downplay the efficacy and priority of grace, particularly in Romans. These details aside, however, Paul and the Power of Grace is a thoughtful, helpful, and accessible introduction to the conversation.