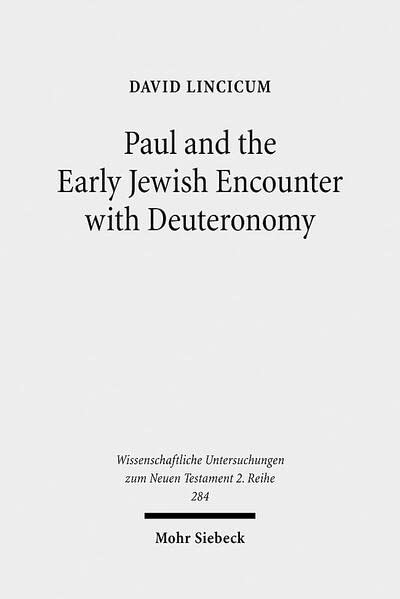 Paul and the Early Jewish Encounter with Deuteronomy

In this dissertation under the supervision of Markus Bockmuehl, David Lincicum seeks “to delineate the range of approaches to the ‘last book of Moses’ in Jewish literature spanning from approximately the third century BCE to the third century CE, with a special focus on the relief into which such delineation casts the apostle Paul” (p. 3). To accomplish this goal, Lincicum seeks to go beyond the narrow confines of intertextuality (which has the tendency to present Paul as “engaged in a virginal act of interpretation apart from the pesky prejudices of corporeality and temporality as a first-century Jew” p. 10) to the more holistic tool of “effective history” (Wirkungsgeschichte). In other words, the study seeks to place Paul within a long line of Jewish authors who engaged Deuteronomy, attempting to “note the aspects … that are significant for each author” (p. 11).

From there Lincicum proceeds in two uneven parts. Part 1 (which consists of ch. 2) explores how Jews encountered Deuteronomy. His discussion moves from the physical realities of its bilingual existence (Greek and Hebrew) and manuscripts to the liturgical context of that encounter through synagogue readings, tefillin (small leather capsules containing Scripture passages worn on the forehead and left arm), mezuzot (small, rolled up Scripture scroll attached to the doorpost of one’s house), and daily recitation of the Shema’. These insights are then applied to Paul’s educational background to propose a historically plausible reconstruction of Paul’s sustained encounter with Deuteronomy from his earliest childhood through his experiences in the Greek-speaking synagogue.

Part 2 surveys the various ways Deuteronomy was appropriated, with each chapter devoted to a specific body of literature arranged in roughly chronological order. In the Qumran documents (ch. 3), Deuteronomy served to regulate the covenant and establish a framework for understanding the intersection of Israel’s history with that of the sect. As such it serves to explain both their present and their future. Within the large number of documents in the Apocrypha and Pseudepigrapha (ch. 4), Lincicum briefly surveys Jubilees, Second Maccabees, Pseudo-Philo, Tobit, Baruch, and Testament of Moses. What unites these quite disparate documents is the use of Deuteronomy to explain Israel’s present difficulties and provide a blueprint for her future. Especially prominent is the phenomenon of “rewriting” Deuteronomy “in an act of imaginative appropriation, viewing history from the proleptic standpoint of Moses and his horizon of vision beyond the Jordan” (p. 98).

Philo (ch. 5) draws on Deuteronomy as both a theological and ethical authority, with an emphasis on the necessity of obedience to the laws. Josephus (ch. 7) presents his survey of Jewish history within a Deuteronomic framework, which in his case means emphasizing God’s faithfulness to reward obedience and punish disobedience. Along the way he “actualizes” the legal material for his Greco-Roman audience. In Sifre and the Targums (ch. 8), the eschatological horizon of Deuteronomy is muted, perhaps in light of the failed Bar Kochba revolt. Both evidence holistic engagement with the entirety of Deuteronomy rather than isolated passages.

Lincicum devotes the most space to Paul (ch. 6). Focusing on the explicit quotations, implicit citations, and a few major allusions, he organizes Paul’s appropriation of Deuteronomy under three headings: ethical authority, theological authority, and historical lens. Ethically, Deuteronomy regulates the behavior of the eschatological people of God in a way that shows he does not “relativize Deuteronomy as an ethical authority in any thoroughgoing way” (p. 137). Theologically, Deuteronomy speaks authoritatively not only in Paul’s refinement of the Shema’ in 1 Cor 8 but also in a series of theological axioms that have Deuteronomic roots. As a historical lens, Deuteronomy explains Israel’s status within the framework of blessing and curse as well as anticipates heart circumcision, restoration, and Gentile inclusion. Based on his analysis, Lincicum concludes that Paul read Deuteronomy backwards in two senses: (1) his Deuteronomic diagnosis of Israel’s history is shaped by knowing that God’s solution is found in Christ; (2) his presentation of Deuteronomy to his churches begins conceptually with the eschatological final chapters and then moves to the earlier ethical chapters. He does this because the Spirit now enables believers to fulfill the law. “In this sense, the ethical reading of Deuteronomy is grounded in the Christological and pneumatological reading” (p. 168).

In the concluding chapter, Lincicum draws together the fruit of his labors. He concludes that while early Jewish engagement with Deuteronomy spans the totality of the book, a number of texts focus on the closing chapters of the book. This interest stems from (1) their biographical description of Moses’ last words and actions and (2) their value for understanding Israel’s plight. Turning to Paul, Lincicum argues that Paul understands the revelation of the crucified and risen Jesus “instinctively . . . through the lens of Deuteronomy’s prophetic judgment on Israel’s history” (p. 198). While Paul recognizes the newness of what God is doing in Christ, “he is emphatic that this God is none other than the one God confessed twice daily in the Shema’” (p. 198).

Throughout this monograph Lincicum shows careful attention to each document/corpus, treating them on their own terms. The discussion of the “material realia” of the early Jewish encounter with Deuteronomy was particularly interesting, as it brought to life the actual ways that Jews encountered the book in a primarily liturgical context. Overall the book is well-written, well organized, and easy to follow in its main arguments.

Having said that, the fundamental weakness of the study is that it attempts to cover too much ground within the limits of a dissertation. At several points Lincicum is limited to offering one- or two-page summaries of how entire documents such as Jubilees, Second Maccabees, Tobit, and Baruch appropriate Deuteronomy. As a result, Lincicum generally is not able to engage in detailed and extended exegesis of key passages and their intersection with Deuteronomy. On a methodological level, the claim that the study of Wirkungsgeschichte has the ability to correct “the interpretive solipsism toward which theories of intertextuality sometimes tend” may be true to some degree; however, Lincicum fails to acknowledge that the best scholarly works in the area of intertextuality do take seriously the way given texts were received, interpreted and applied by other readers. Finally, the space constraints also prevent Lincicum from unpacking the implications of statements that beg further clarification (e.g., “The variety of these [ethical] appeals [to Deuteronomy] renders it unlikely that Paul intends to relativize Deuteronomy as an ethical authority in any thoroughgoing way” [p. 137]).

In sum, Lincicum has made a valuable contribution to our understanding of how Deuteronomy was appropriated in the centuries surrounding the NT. As such all who do future work in this area will benefit from his work. But the space constraints unfortunately limit the depth of engagement the topic deserves.