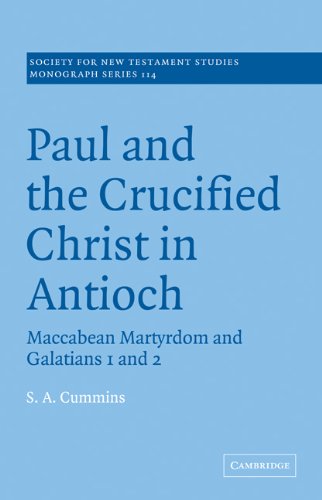 PAUL AND THE CRUCIFIED CHRIST IN ANTIOCH, SNTSMS 114

In this detailed and complex exegetical study of the ‘Antioch incident’ (Gal. 2:11–21), the author seeks to explore what was at stake theologically for Paul in his famous dispute with Peter. Cummins writes from within the ‘new perspective’ on Paul, and so rejects the traditional protestant view that Paul’s critique of the works of the law stems from a desire to counter works-righteousness. However, neither is he fully satisfied by explanations that regard Paul’s principal concern as the use of the works of the law (e.g. circumcision, food laws and Sabbath observance) as covenant boundary markers to define the people of God in narrow, nationalistic terms. There are other reasons as well for Paul’s redefinition of God’s people, which concern the identity of Christ and of those who are in Christ.

Cummins finds these reasons, missed by previous commentators, in the influence allegedly exercised on both sides in the Antioch dispute by the example of Maccabean martyrs. They were put to death for their steadfast obedience to the law in the second century bc during the persecution of the Jews by Antiochus IV Epiphanes. The martyrs’ faithful adherence to the covenant inspired the ‘circumcision faction’ (2:12), who interpreted the difficult circumstances of contemporary Judaism within a Maccabean framework. Hope for Israel’s vindication by God lay in a similarly steadfast defence of the Jewish way of life, something perceived to be threatened by table fellowship between Jews and Gentiles in the Antioch church. In contrast, Paul believes the martyrs’ mantle to have fallen upon Christ, whose death he understands as that of Israel’s faithful martyred Messiah. Those who are faithful to Christ will be conformed to him, and will accept opposition and persecution in order to defend the truth of the gospel. Peter’s fearful withdrawal from table fellowship with Gentiles (2:12) therefore constitutes an abandonment of Christ. Paul’s account of the dispute at Antioch presents it is an ironic inversion of the Maccabean crisis, with his Jewish Christian opponents cast in the role of persecutors and him as one displaying martyr-like steadfast conformity to Christ. Paul believes that it is only in conformity to the faithfulness of Messiah Jesus that vindication can come to Israel and justification (understood as God’s righteous declaration that a person is a member of his covenant people) be received.

The credibility of Cummins’ argument depends upon the widespread appropriation of the Maccabean crisis within first century Judaism. For its influence to shape the Antioch dispute, it must already have formed a significant aspect of Jewish identity. Cummins surveys the textual evidence for this, and it is not difficult to imagine first century Jews drawing parallels between their own situation under Roman domination and that of their forebears under the Seleucids. The appeal of the example of the martyrs for Paul’s opponents, and the arguments with which it might provide them, is clear. Less obvious is the suggestion that Paul understood both Christ’s death and his own defence of the gospel within the same paradigm. To defend a law-free gospel to the Gentiles using the example of those martyred for their resolute obedience to the law in the face of Gentile persecution is no easy task. Cummins therefore needs to show that details of Paul’s account reflect the influence of the Maccabean tradition. The evidence presented for this is largely in the form of vocabulary shared by Paul and other relevant texts, especially 2 and 4 Maccabees. It is often unclear however whether this represents genuine influence upon Paul or more coincidence, especially as the shared vocabulary does not directly concern martyrdom.

Another vital aspect of Cummins’ argument is the existence of extensive messianic expectation within first century Judaism, and he regards ‘one like a son of man’ in Daniel 7:13–14 as a messianic figure. Paul’s understanding of Christ’s death as that of a martyr reflects the early Christian reworking of these Jewish expectations of a redeemer and ruler who would represent and rescue Israel’s faithful from their affliction under Gentile rule. This understanding finds expression in Romans 3:21–26, where Paul’s description of the atonement has been influenced by texts in 2 and 4 Maccabees. If all of this were proven, it would add considerable weight to the claim that this is the understanding of Christ’s death held in Galatians 2, providing it with a credible historical background. However, every aspect of this background is controversial, with weighty possible objections. In many instances, Cummins is decidedly in the scholarly minority. He is scrupulously honest in acknowledging this, and lays out his case with great care and thoroughness, but one is left wondering whether he can be right every time. He would need to be the historians’ equivalent of a very lucky gambler! The real significance of this work may be that it is an attempt, from within the ‘new perspective’ on Paul, to offer an explicitly theological account, focused as much on divine/human relationships as on Jew/Gentile relationships, of Paul’s critique of the law. One suspects that it will not be the last.