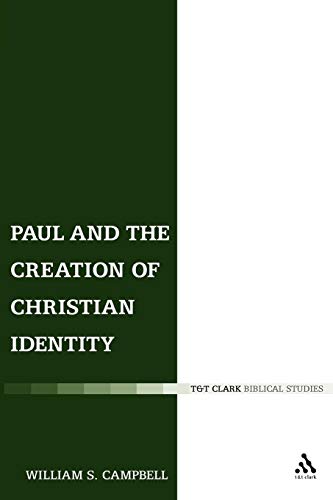 PAUL AND THE CREATION OF CHRISTIAN IDENTITY

Campbell’s analysis of Paul arises from a concern for the treatment of the ‘Other’ in modern multi-cultural societies. He seeks to counter claims of a uniform, ‘universal Christian identity’ that not only affords no room for distinctive Christian identities around the world (i.e., Nigerian or Korean) but also fosters a sense of Christian superiority over other world faiths. The logic of the argument works as follows. This universal Christian identity assumes a sameness among all Christians while negating ‘the identity of the other who is and remains different’ (xi). This erroneous identity in large part stems from a misinterpretation of Paul as one who rejected his Jewish heritage in toto in favour of a new and completely different Christian self-understanding. Campbell argues that Paul did not reject his Jewishness nor intend to eliminate either Jewish or Gentile identity in others for the sake of asserting a unitary Christian identity. Rather, according to Campbell, Paul sought to preserve existing identities of Jewish and Gentile Christ-followers while promoting a genuine equality that respected differences between them. A combination of situational factors led later Christians to misread his letters and drive Jewish believers from the church, leaving a thoroughly Gentile church in its stead. According to Campbell, recovery of this earlier, true reading of Paul can enable a Christian identity that stands open to the ‘Other’ today. Although Campbell recognizes that Paul spoke to those within the Church, he believes that Paul’s position regarding diversity carries implications beyond the Church as well (although he never explains how this is so).

The book reads more like a collection of essays on particular issues in or sections of Paul’s letters than a coherent linear argument. Each chapter quickly returns to the main theme of the book: Paul did not seek to suppress pre-Christian identities but promoted ‘diversity’ among Christ-followers.

On the whole, I am sympathetic with most of Campbell’s reading of Paul. Paul remained a Jew after his encounter with Christ and carried out his apostolic commission as a Jew, seeking to graft the wild gentile olive shoots onto the roots of the Jewish olive tree (Romans 11:17). In addition, at several points, Campbell offers an astute perspective on the pro-Jewish nature of Paul’s arguments.

Yet, the book disappoints in numerous ways. Repeatedly, I found Campbell underplaying evidence from Paul’s letters that called his own interpretations into question. For example, he believes Romans was addressed to Gentile Christ-followers only. Yet he only deals with the facile arguments to the contrary, ignoring more substantive evidence for Jewish Christ-followers among Paul’s addressees.

Furthermore, Campbell frames his categories in such a dichotomized fashion that one cannot help but agree with his conclusions. On his opening page, he contends that one either affirms a universal Christian identity that suppresses diversity, looks down on persons from other faiths, and fosters victimization of others or one opts for the sort of diversity for which Campbell argues. One can imagine other options, but Campbell leaves no room for them. Is this any way to treat an ‘other’ who might disagree with him?

The shame in all of this is that Campbell is on to something. Misreadings of Paul have indeed produced the kinds of horrific results he rightly deplores. But the manner in which he frames the issues along with his manner of argumentation leaves one with the impression that Campbell has reached a conclusion and is searching for supporting arguments rather than the reverse.