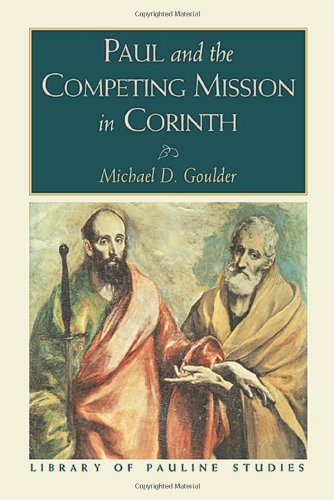 PAUL AND THE COMPETING MISSION IN CORINTH

Michael Goulder, retired professor of New Testament in the University of Birmingham, lays the groundwork for no less than ‘a comprehensive theory of the origins of Christianity and the New Testament’ (back cover). Goulder resurrects and modifies a portion of F.C. Baur’s hypothesis that pitted large portions of early Pauline Christianity against an opposing Petrine wing. The Corinthian correspondence is a natural starting point, because 1 Corinthians 1:12 describes some claiming to be ‘of Paul’ and others ‘of Cephas’. Goulder’s hypothesis requires the probable presupposition that the false teachers of 2 Corinthians 10–13 are Judaizers, and the at least plausible hypothesis that Judaizing remains in view throughout both epistles. A welcome corollary is the integrity of both letters without recourse to theories of interpolations or composite documents.

Goulder’s proposal also requires taking a huge amount of diverse data from both letters and seeing only one, distinctively Jewish-Christian movement behind them all. The elitist mentality Paul combats in 1 Corinthians 1–4 must reflect Jewish wisdom. For Goulder sophia consistently refers to written Torah and logos to oral halakah. The apparent hedonism behind the problems addressed in chapters 5–6 stems from Jewish visionaries whose new words from the Lord justify their immoral behaviour. The pro-celibacy faction behind chapter 7 mirrors the persistent, minority strand toward marriage within Judaism represented by the Therapeutae, Qumran and certain Ebionites. Paul entirely opposes eating meat known to have been sacrificed to idols and even promotes a kosher table in Corinth. It is the Petrines (who have broken away from James’ followers at this point, though typically not elsewhere), who through their visions support too much freedom from the Law! Out-of-control women at worship (ch. 11), like the abuse of spiritual gifts more generally (chs. 12–14), likewise comes from those aligned with Peter, who are supplementing the written Law with their revelations that violate decorum. Because later Jewish Christianity would at times look at Jesus as only a prophet, Goulder assumes early Petrine Christianity did so as well—hence the need for Paul to stress the bodily resurrection of Jesus, which showed him to be fully divine (ch. 15).

The presence of a Judaizing tendency, modified by remarkably un-Jewish revelations, continues to account for issues that loom larger in 2 Corinthians. Peter’s followers quote Jesus to justify charging for their ministry and criticising Paul for not doing so (2 Cor. 2–3). The strong emphasis on the new age of the Spirit versus the old age of the Law reflects the same Hellenistic versus Jewish contrast (2 Cor. 3–4). ‘Knowing Christ according to the flesh’ sums up the Petrines’ slogan (cf. 2 Cor. 5:16), because Peter walked with the earthly Jesus while Paul did not. And of course the clearest evidence appears in chapters 10–13, as Paul challenges head-on the false criteria for spirituality offered by the Petrines.

A critique should not deny that some conceivable strand of Judaism could lie behind every error Paul has to confront in these two letters; Judaism was diverse enough for that. But, although on occasion Goulder takes time to interact with those of opposing perspectives, more often than not he assumes he has demonstrated that Jewish errorists are in view and deals only with explaining their perspective. When one recalls how much more dominant and persistent Hellenistic hedonism and asceticism were in and around Corinth, it is hard to see why one should prefer a uniquely Jewish root for this church’s problems. At no point does Goulder interact with any of the recent defences of Sophistry as a key background influence. And the very illuminating sociological approaches that suggest a disproportionate amount of blame should go to the minority of well-to-do Corinthians are relegated to one of five appendices and assigned little value!

As with Goulder’s works on midrash and Q, this book’s thesis proves at once creative and improbable, reflecting brilliant ingenuity in forcing disparate evidence all to fit a single mould. Intriguing new interpretations of individual texts appear here and there, but it is unlikely that the central claims will overturn more standard ones.