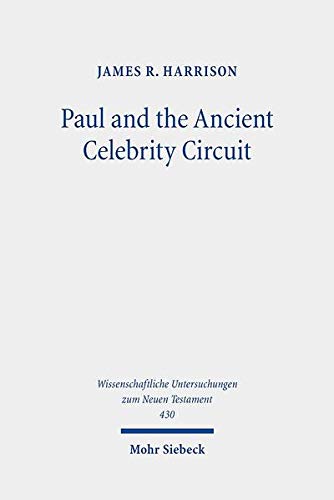 Paul and the Ancient Celebrity Circuit: The Cross and Moral Transformation

Few people consider the link between celebrity culture and Pauline theology. A noteworthy exception is James Harrison, professor of biblical studies and the research director at the Sydney College of Divinity. His extensive study of various sociological dynamics in the ancient Greco-Roman world uniquely positions him to shed light on an oft-neglected dimension of biblical studies. This work synthesizes a wide range of scholarly material to demonstrate how Paul contextualizes and ultimately subverts the celebrity culture of his age.

Harrison opens by juxtaposing ancient and modern versions of celebrity. In so doing, he corrects the potential misimpression that the ancient world lacked celebrities due to differences in media then and now. Inscriptions, coinage, sculptures, and iconography are a few ways that a person’s public fame could spread in antiquity. Besides military victors, athletes such as gladiators and charioteers were ancient predecessors to today’s YouTube celebrities. Certain artists gained celebrity status for their entertainment skills, whether in performing pantomime, music, drama, or even comedy. He documents important distinctions of ancient celebrity from its modern forms. For example, ancient celebrity could not be separated from Greco-Roman elitism; additionally, it was bound up with the perpetuation of ancestral glory.

Each of the eight chapters at the book’s core begins the same way. First, Harrison reviews relevant literature highlighting some facet of celebrity in antiquity. Second, he shows how Paul exploits or subverts conventional notions of celebrity for the sake of his gospel ministry. From multiple angles, Harrison spotlights “an outworking of the work of the cross that inverts social relations in unexpected ways, unleashing a moral transformation that challenges the hierarchical, celebrity-and-status mores of the ancient and modern worlds” (p. 46).

Paul’s tactics are as subtle as they are subversive. His emphasis on the “body of Christ” reorients the social context dominated by Rome’s body politic. He topples the social strata that exclude those without the privilege of wealth or birth. The benefaction system, central to ancient celebrity, is reconfigured by Paul such that Caesar becomes a “servant” and God, through Christ’s church, is exalted as the supreme benefactor. Furthermore, the “reluctance” of Augustus to assume power seems a parody in light of Paul’s boasting in his inadequacy and of Christ’s weakness.

Much like today, ancient Greco-Romans lauded their athletes, whose victories were marked with a crown. In 1 Corinthians, Paul urges readers to invest the same effort exercised by celebrity athletes yet for the sake of a greater, lasting crown. Likewise, one function of ancient Greek education was the acquisition of skills required to secure glory. These entailed the capacity for civic leadership. Whereas the gymnasiarchs accentuate the past glory of ancestral tradition, Paul looks forward to true glory, enjoyed in the eschaton.

Harrison also notes the frequent theme of imitation among ancient writers. Roman leaders aspired to imitate the beneficence of ancestors. By extending grace to others, the “great man” would display his strength and generosity; more importantly, he would put the public in his debt within a culture where faithful reciprocal exchange was an essential virtue. By contrast, Paul calls churches to imitate him in his suffering. This entails boasting in weakness. Yet, emptying oneself––like Christ on the cross––would be seen as the antithesis of greatness according to ancient standards. Harrison offers footnotes during the discussion on benefaction and reciprocity. Still, readers would benefit from a more extensive discussion on the meaning of grace in Paul’s context. Harrison directs our attention to his Paul’s Language of Grace in its Graeco-Roman Context, WUNT 2/172 (Tübingen: Mohr Siebeck, 2003) and to John Barclay’s Paul and the Gift (Grand Rapids: Eerdmans, 2015).

Paul does not discourage the pursuit of honor, Harrison reminds us. Rather, Paul seeks the praise that comes from God above the applause of a world that does not follow Christ. For Paul, this change in perspective involves a change in collective identity. Civic associations were sprinkled across the Greco-Roman world. It was in these communities that members fostered virtue and secured social status. Harrison contrasts this social reality with Paul’s vision for the church. Rather than assert self-sufficiency and engage in rivalry, believers are “encouraged to act in a unified manner amidst their diverse giftedness. The only way for that to happen without competition and division is for the least honoured in the Body of Christ to become the most honoured in social interactions” (p. 286).

As with other volumes in the WUNT series, Paul and the Ancient Celebrity Circuit is a dense work of scholarship. Its chapters complement one another and paint a vivid picture of ancient celebrity as well as Paul’s reappropriation and reconfiguration of its cultural values. While Harrison constructs a coherent argument in defense of his thesis, non-specialists will find his book daunting in its detail. He revisits several themes at different points in the book. However, some degree of redundancy is expected in a work like this. Readers will also notice periodic but not rare typographical errors throughout the text. In multiple places, the author could have stated his arguments with a bit more concision, but these are minor quibbles. Harrison fills a lacuna in academic literature. One can only hope that this book will spur greater reflection concerning how the insights from this work apply to our contemporary celebrity-crazed culture.