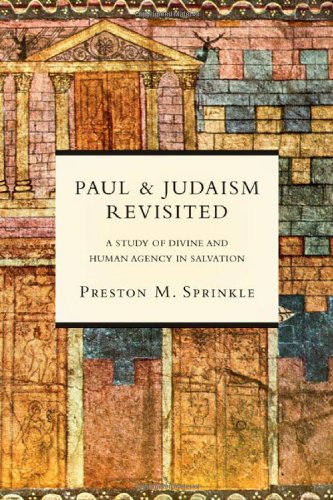 Paul and Judaism Revisited: A Study of Divine and Human Agency in Salvation

Is it true that Jews believed that they were saved by works, whereas Paul insisted that salvation is by faith alone? Traditionally, Christians have answered in the affirmative, but much recent scholarship, known as the New Perspective on Paul, has made things more complicated.

Despite the amount of scholarly ink that has been spilt on this issue over the past 36 years, Sprinkle succeeds in moving the discussion forward. What makes his contribution stand out is his attention to the methodological challenges involved in comparing what Paul has to say about salvation with statements from Jewish literature, statements that may have been intended to address very different questions than the ones Paul is wrestling with in his letters. To ensure a meaningful comparison, Sprinkle has been looking for writings of a genre that is comparable to Paul’s letters and for statements that address similar questions. He finds that the writings of the Qumran community are the ones that are best suited for such a comparison.

Sprinkle argues that OT and Jewish views of salvation (including those of Paul) may be understood within the tension between what he calls the deuteronomic and the prophetic perspectives. On the deuteronomic perspective, God promises salvation in response to human repentance; whereas, on the prophetic perspective, God’s salvation is viewed as a unilateral act. Sprinkle’s way of analyzing this material corresponds to the focus on divine and human agency in salvation, a distinction that has been highlighted by scholars such as John Barclay, Simon Gathercole, and Francis Watson. Applying these categories, Sprinkle examines the view of Israel’s restoration, the granting of the Spirit, human ethical ability, justification, and judgment according to works.

Sprinkle’s examination should be commended for allowing the complexity of the material to stand. One might have suspected that he would have placed Qumran squarely in the deuteronomic category and Paul in the prophetic category, but Sprinkle does not fall into the temptation to “juke the stats” and make his findings appear more decisive than they are. While Sprinkle finds a strongly prophetic perspective and a clear emphasis on one-sided divine action in Paul’s writings, he does not read the writings from Qumran as examples of the opposite tendency. The realm of views expressed in these writings covers a broad spectrum, ranging from deuteronomic to prophetic perspectives.

Sprinkle finds some degree of continuity between Paul and the hymnic writings from Qumran, and he classifies several passages from Qumran within the prophetic category. Similar to Paul, the Words of the Luminaries (4Q504) and the Thanksgiving Hymns (1QHa) attribute restoration to a one-sided divine action, look forward to God’s unilateral act of granting the Spirit, and hold a very pessimistic view of human capacity for doing good. Sprinkle observes an important distinction, however, in that Paul’s emphasis on transformation is not paralleled in the Qumran scrolls. (Sprinkle does not read Rom 7:14–25 as a description of the Christian believer; he thinks such an interpretation corresponds to the views of the Thanksgiving Hymns.) Whereas Paul understands believers as having gone from darkness to light, the members of the Qumran community are described as “sons of light,” but never as former “sons of darkness.”

I wonder, however, if Sprinkle’s account is completely adequate here. In the Hymns, God’s grace is not only manifested in forgiveness, but also in teaching the faithful to walk in the right path and in keeping them from sinning. The hymnist confesses, “I have understood that [you smoothen] the path of the one whom you choose and by the insight [of your knowledge you pre]vent him from sinning against you, you [re]store his humility through your punishments” (1QHa 4:21–22). Later, we read, “I have enjoined my soul with an oath not to sin against you [and n]ot to do anything which is evil in your eyes” (1QHa 6:17–18).

Concerning justification, the contrast between Paul and Qumran is much clearer: Paul’s God justifies the ungodly, whereas the God of the Qumran writings justifies the righteous. Regarding judgment according to works, Sprinkle maintains that such judgment is essential to Paul’s theology and that it does not contradict his teaching on justification by faith. Sprinkle follows Simon Gathercole in arguing that this judgment is based on God’s own work in the believers (his argument here is particularly strong). Unlike Gathercole, however, he does not read Rom 2:13 in this light, but defends the view that the justification described here is purely hypothetical at this stage in salvation history.

Sprinkle’s findings provide an important corrective to the New Perspective on Paul, as they show some important differences between the views of salvation in Paul and in Judaism (especially that of the Qumran scrolls, but Sprinkle also includes a chapter that surveys other writings of the Second Temple period). Paul is more single-minded in his emphasis on God’s one-sided action in saving human beings.

Sprinkle’s attention to the spectrum of Jewish views also shows, however, that we cannot simply conclude that Paul’s theology was monergistic and Jewish theology was (consistently) synergistic. The question remains, therefore, if the focus on divine and human agency is able to take us to the heart of the differences between Pauline and Jewish theology. Sprinkle also concludes, “Paul’s emphasis on divine agency is not unparalleled,” and “the most unique element in Paul’s soteriology” lies elsewhere, namely, in “the sacrificial death, bodily resurrection, subsequent enthronement, and personal indwelling, intercession and love that the risen Messiah accomplishes in and for wicked people” (p. 249).

In sum, the book is to be recommended, but I am not completely sure for whom. It appears that the implied reader is a beginning student, as the use of Greek and Hebrew is limited (and always transliterated) and as Sprinkle does not assume that the reader is familiar with the scholarly discussion. But the book is not written as an introduction to the subject, as the overview of the state of research is quite brief (but the footnotes are extensive). Sprinkle also skips crucial topics, such as election, with the explanation that he has nothing new to add to them, which would imply that his goal is to advance the scholarly discussion (he succeeds). The book will probably be most useful to advanced students and scholars.