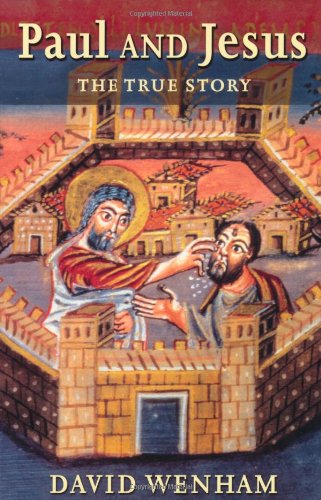 PAUL AND JESUS: THE TRUE STORY

Seasoned readers of Themelios will need no introduction to the work of David Wenham who has taught at Wycliffe Hall, Oxford, for many years. Many will have read his important scholarly (yet readable) volume, Paul: Follower of Jesus or Founder of Christianity (Grand Rapids/Cambridge: Eerdmans, 1995). Now Wenham has taken some of his previous work and reshaped it for a wider readership. The result is a very readable and dependable introduction to aspects of Paul’s life, writings and thought.

The book is composed of three parts. Part 1 takes us from Paul’s origins, through his conversion (as Wenham argues it was) and the period which followed it, to Paul’s time in Antioch. Part 2 is the most substantial portion of the book. Here Wenham interweaves chapters on Paul’s travels (until he reaches Ephesus) and chapters on the content of Paul’s earliest letters (according to Wenham’s reckoning), Galatians, First and Second Thessalonians, and First Corinthians. In this, Wenham follows the pattern previously followed in the valuable books by his distinguished doctoral supervisor F. F. Bruce and, more recently, by John Polhill. Part 3 is composed of two short chapters in which Wenham emphasises that Paul’s story went on beyond the point at which he has chosen to stop, and that both Acts and Paul’s letters present ‘true stories’ of Jesus and Paul.

In all of this there is a strong emphasis on two issues. First, Wenham argues at length for the compatibility of the narrative of Acts with the statements of Paul in his own letters. Second, Wenham presents evidence that Paul had more awareness of and interest in the life and teaching of Jesus than has sometimes been suggested.

This book is written with a light touch and is very enjoyable to read, but I am somewhat unsure of its target readership. The clear manner in which material is presented and points are made would be ideal for beginning students, yet there is no direct engagement with scholarship (although very competent scholarship clearly lies behind the text). This is at the more problematic if courses on Paul are in second year or beyond of an undergraduate course. Also, the specific emphases which Wenham chooses to develop mean that a student would not encounter a full presentation of Pauline theology here (such as is found in T. R. Schreiner’s recent volume). Its distinctive characteristics will perhaps make it most effective as an introduction to Paul for Christian readers, a refresher for hard-pressed pastors or supportive reading for NT introduction courses. Those who enjoy this taster should certainly consider going on to benefit from Wenham’s earlier book.