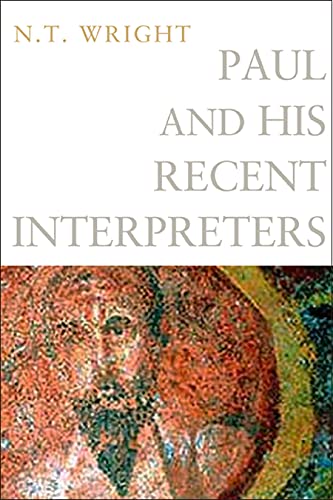 Paul and His Recent Interpreters

In Paul and His Recent Interpreters, N. T. Wright surveys and evaluates the major movements in contemporary scholarship on Paul. This is not the final word on Pauline studies, but it does provide a much-needed framework for understanding the trends that continue to dominate the field.

Although he focuses on the years since 1970, Wright first sets this recent scholarship against the backdrop of earlier debates. The “new perspective” thus appears as a turn away from the anti-Jewish and idealizing reading of Paul that dominated from the 19th century until Rudolf Bultmann. The “apocalyptic” trend in recent scholarship likewise finds its roots in the older debate about whether justification was really the heart of Paul’s theology or was secondary to the idea of “participation,” i.e., of being “in” Christ.

From the 1970s on Wright gives attention to four broad movements. E. P. Sanders launched the first of these, the so-called “new perspective,” with his insistence that ancient Judaism was not really a system of “works righteousness.” Although Sanders’s depiction of Judaism has been criticized at points, Wright reminds us that even Sanders’s opponents have since moved to a view of Judaism that is worlds apart from the caricatures popular in earlier generations.

This suggests, though, that when Paul opposed “faith in Christ” to “works of the law” he was not fighting the rigid and hopeless legalism deplored by Luther. Wright emphasizes how the various “new perspective” interpretations all attempt to explain, in that case, just what Paul was opposing in Galatians and Romans. Why pit “faith” against “works” if Jews already understood that salvation came by grace? Wright is sympathetic to James D. G. Dunn’s proposal that “works of the law” were a problem because they separated Israel from the nations. Since Paul believed that God was forging a unified people of both Jew and Gentile in Christ, the Torah that defined a distinctly Jewish identity had to be set aside. As one of the leading “new perspective” thinkers Wright sounds defensive here. He insists that he and Dunn never denied the reality of sin, the necessity of individual salvation, or the centrality of faith in Christ “apart from the law.” Fair enough. I think that much of the misunderstanding around the “new perspective” has arisen from the fact that, for Wright and Dunn, Judaism already prioritized faith over works. So while these scholars see issues of ethnic identity as the focus of Galatians and Romans, this is in the context of Paul’s (and most Jews’) presumption that works could not earn salvation. Still, Wright recognizes that this point was confused by the way some (like the early Francis Watson) did reduce “justification by faith” to a rhetorical ploy designed to ease his Gentile mission.

Wright’s brief survey of the reaction against the “new perspective” does little to untangle the debate and does not do justice to the arguments for a more “Lutheran” reading. Having chosen Stephen Westerholm to represent this response, Wright’s dismissiveness is disappointing. He could at least have noted the places where his own reading and Westerholm’s actually agree. Both, for example, insist that Paul thought Jewish attempts to keep Torah were a good thing prior to Christ, not the idolatrous grasping Luther suggested. Wright does help us, though, to keep in view the larger picture: that the “new perspective” launched a fresh attempt to understand Paul within the actual Judaism of his day and to locate the Apostle’s theology of justification within a broader understanding of God’s purposes for the church.

Wright next describes the “apocalyptic” reading of Paul’s theology championed recently by J. Louis Martyn and Douglas A. Campbell. Both of these writers depict the cross as a radical break with everything that came before, so that any kind of “salvation history” is impossible. Both also stress Paul’s theology of participation with Christ, with Campbell denying that “justification” has any place in Paul’s theology at all. Wright notices, though, how often these “apocalyptic” readings are forced to “neutralize” Paul’s talk about justification by claiming that the Apostle is simply quoting his opponents’ views. Wright also drives home the fact that this “apocalyptic” theology has little to do with the thought we find in actual Jewish apocalypses. To the extent, then, that the label “apocalyptic” is meant to connect such a Paul with his contemporary context, it rests on hollow foundations.

Wright’s third movement is the social scientific analysis of Paul’s letters. Here Wright draws attention to the divide between social historians like Wayne Meeks and the “purer,” more theory-driven, sociological approaches of the early “Context Group.” Wright sides firmly with the former and warns against the use of comparative sociological models to infer what Pauline communities “must have” been like, especially when models of “millenarian movements” and the like are drawn from the later history of Christianity itself. On the other hand, Wright applauds the attempts of Meeks and others to understand how Paul’s thought arose from and shaped the distinctive life of the Apostle’s actual churches.

The fourth movement described by Wright is the most recent and the least familiar to most of Paul’s readers. European political philosophers, some of them atheists, have suddenly rediscovered Paul as a resource for thinking about modern, pluralistic societies. Wright’s treatment of these philosophical readings is short and will likely confuse readers without a background in Continental thought. He does well, though, to place this recent movement on the map of Pauline scholarship and to treat it as a serious addition to the conversation.

Reading between the lines of this survey we gain a clear picture of the contribution Wright sees himself making to the field. He believes that “justification” and “participation in Christ” can and must be held together as aspects of one over-arching story. In this story Jesus the Messiah represents God’s way of making good on his commitment to renew Israel, remake humanity, and refashion the broken cosmos. God is not only rescuing individuals from sin and death, but is also forming concrete communities to embody that new creation in the midst of the present age. At this broad level it is difficult to find fault with Wright’s project and his sketch of the field underlines how often these emphases have been neglected. Wright himself stresses how these themes resonate with classic Reformed (as opposed to Lutheran) readings of Paul.

Readers will inevitably complain that Wright has neglected some developments like the rhetorical analysis of Paul’s letters or the explosion of interest in Paul’s use of the Old Testament. One might wonder why certain scholars (David Horrell?) are singled out for so much space while others (Abraham Malherbe and Philip Esler?) are given short shrift. Still, Wright succeeds admirably in sketching a “big picture” of the movements in contemporary Pauline studies that is easily missed amid crowd of books and articles on the Apostle.