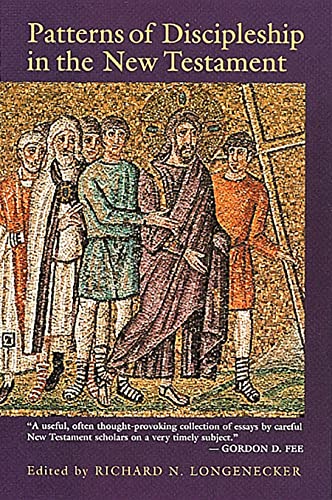 Patterns of Discipleship in the New Testament

‘Make disciples of all the nations’ (Mt. 28:18–20) has been understood as the heartbeat of Christ’s commission for the Church of all ages. We see clearly in the Gospels the disciples of Jesus gathered around him, learning from him the essence of discipleship. We also see clearly in the book of Acts newly converted disciples receiving this teaching from Jesus’ first disciples. Yet when we turn to the books of the NT that speak directly to the life of the earliest churches (the epistles and Revelation), we find a striking absence of the term ‘disciples’ (mathētes/mathētai). Given this phenomenon, can we find patterns of discipleship in the NT that connect the teaching and practices of Jesus and his earliest disciples with the life of the earliest church? Not many works on discipleship have addressed this phenomenon directly.

A symposium at McMaster Divinity College in Ontario, Canada, set out to do so. The result is Patterns of Discipleship in the New Testament, edited by Professor Richard Longenecker. This collection of essays by scholars involved in the symposium aims to present solid biblical scholarship that addresses personal application for readers as they seek to be better disciples of Jesus Christ, since, in the words of the editor, discipleship lies at the heart of all Christian thought, life and ministry.

As one might expect from a collection of essays, a variety of exegetical methods are employed, especially in the discussion of the Gospels and Acts. This includes a biblical, theological examination of themes in Mark (Larry Hurtado), a literary approach to Matthew’s disciples (Terence Donaldson), a redaction-critical analysis of discipleship in Luke’s Gospel and Acts (Richard Longenecker) and a lexical perspective of discipleship terminology (Melvyn Hillmer). This collection of methods can be somewhat confusing to the uninitiated, and some of the working presuppositions might be questioned (e.g. Hillmer’s rejection of traditional authorship of the Johannine materials), but these chapters highlight standard methodologies employed in the Gospels. Although there is nothing really groundbreaking here, these essays accent the general conclusions that have been reached in discipleship studies in the Gospels and Acts in the past 40 years.

The task in approaching discipleship in the Pauline letters and the rest of the NT is different. In the first place, because the explicit terms for disciple/discipleship are absent, one must make a case for the existence of this phenomenon. From there one must determine whether discipleship in the epistles/Revelation is the same as, different from, or unrelated to that found in the Gospels/Acts. What is the relationship of ‘discipleship’ to the Christian life generally? Is it only one aspect of it, or is it co-extensive with the Christian life? While there is no direct, extended discussion of these questions in this volume, each author operates under certain assumptions.

On the one hand, some acknowledge the absence of disciple terminology but readily find patterns of discipleship in these writings that either parallel or connect directly with the form of discipleship found in the Gospels. This surfaces in such themes as ‘holiness’ (Jeffrey Wiema, p. 98), ‘imitation’ (Linda Belleville, pp. 121, 140–41), the ‘cost of relationship to Jesus’ (William Lane, p. 204), ‘the shape of Christian existence’ (Peter Davids, p. 225), ‘following Jesus’ to heaven (Ramsey Michaels, pp. 248–9), and ‘following victoriously and obediently the risen Christ’ (David Aune, p. 283). What might have been clarified more fully in these chapters is the connection between any particular theme and other themes, and to the whole of discipleship and the Christian life.

On the other hand, some suggest that discipleship in Paul is different from that found in the Gospels. This may be because Paul does not draw upon the Gospels, but rather draws upon a broad understanding of discipleship found throughout the ancient world, i.e. the religious and moral purpose of achieving ‘likeness to God’ (Ann Jervis, pp. 144, 161). Or it may be because the post-resurrection era calls for a distinctively new pattern in which Christ’s followers now, instead of following Jesus around the countryside, pattern their lives on Christ by ‘imitating his thoughts and actions’. In so doing Paul intentionally avoided disciple terminology (Gerald Hawthorne, pp. 165–7).

Two essays provide a more comprehensive approach. Michael Knowles demonstrates that discipleship in the post-resurrection era can be summarized in the Pauline expression ‘in Christ’. The emphasis is not upon merely gaining correct understanding or adopting correct behaviour, but more fully involves ‘being renewed’ to gradual conformity to the image of God and full humanity as represented by Christ (Knowles, pp. 180–81, 200–01). Richard Longenecker makes links between the era of Jesus and his disciples and that of the early church by defining discipleship generally as ‘authentic Christian existence’, and discipleship teachings concern ‘Christian self-understanding and practice …’ (p. 5). These latter approaches rightly see discipleship as the holistic relationship initiated by Jesus in his early ministry that is the foundation for the post-resurrection relationship with him. One could wish that this comprehensive understanding of discipleship was used more explicitly to give general guidance to all the essays.

The attempt to apply the scholarly material to present-day life is perhaps more uneven. Some chapters (e.g. Donaldson, Longenecker, Hillmer, Belleville, Davids) offer important implications for present disciples of Jesus Christ, while acknowledging the hermeneutical difficulties of moving from the first-century setting, time and culture to the present. However, roughly half of the chapters, while giving a clear statement of what discipleship entails in their respective NT book, do not offer any clearly articulated bridge to present application, contrary to the editor’s stated goal for the volume.

Patterns of Discipleship in the New Testament strikes out in a significant manner to display the essence of discipleship from most quarters of the NT. (Some crucial NT books are omitted, such as the Pastorals, which would have brought other themes, such as mentoring, into the discussion). It demonstrates convincingly that explicit disciple terminology and forms prominent in the Gospels and Acts (e.g. ‘disciples’ following Jesus around) are implicit in related terms and forms in the epistles and Revelation (e.g. believers who are ‘in Christ’, ‘following’ and ‘imitating’ Christ). It accomplishes its intended goal, at least in part. As to its scholarship, Professor Longenecker assembled a fine symposium of scholars to display these discipleship patterns, some of whom have addressed discipleship themes in their scholarly works for many years. Readers will have to supply personal application more than the editor may have intended, but for a scholarly overview of the issues this is a helpful volume, and essential reading for those wanting a serious exploration of patterns of discipleship in the NT.