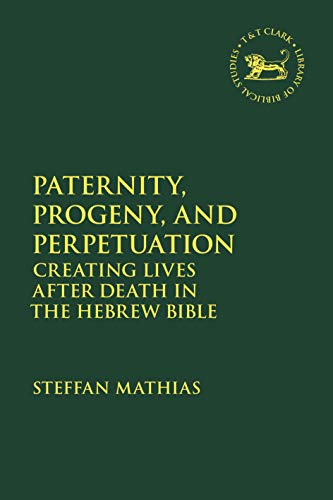 Paternity, Progeny, and Perpetuation: Creating Lives after Death in the Hebrew Bible

2016 at King’s College, London, supervised by Paul Joyce and Joan Taylor. The core question he explores is: how do people in the Old Testament establish perpetuity for themselves after death? The key text is the law of levirate marriage (Deut 25:5–10), which deals with the dilemma of an ancient Israelite man who dies without a male heir. Mathias’s core thesis is that this and similar texts present the failure to produce a son and continue the family line as “a failure in masculinity, the male and social order, leading to eradication of the name, estate and memory of the man” (p. xiii). His thesis is presented over seven chapters, preceded by an introduction, and followed by a conclusion.

Chapter 1 outlines Mathias’s methodology. To uncover the cultural paradigm operating behind the relevant OT texts, he uses Pierre Bourdieu’s concept of “habitus” to determine how social discourses (death, reproduction, memory) predispose people to act (see esp. The Logic of Practice, trans. Richard Nice [Cambridge: Polity, 1990], 53). He also outlines some contemporary gender and queer theories, alighting on Lee Edelman’s concept of “reproductive futurism” (in No Future: Queer Theory and the Death Drive [Durham, NC: Duke University Press, 2004]). This concept is employed to see how OT texts construct the future around the idea of the child.

Chapter 2 outlines four scholarly approaches to the levirate law. Johannes Pedersen focuses on the soul of the deceased (in Israel: Its Life and Culture [London: Oxford University Press, 1926]), Raymond Westbrook on the legal establishment of the man’s title (in Property and the Family in Biblical Law [Sheffield: Sheffield Academic, 1991]), and Eryl Davies on the protection of the widow (in “Inheritance Rights and the Hebrew Levirate Marriage: Part 1,” VT 31 [1981]: 138–44; “Inheritance Rights and the Hebrew Levirate Marriage: Part 2,” VT 31 [1981]: 257–68). Mathias’s evaluation is that these approaches miss the mark, because they fail to consider sex and reproduction, the “fundamental thread” of the levirate law. Herbert Chanan Brichto’s article, “Kin, Cult, Land and Afterlife—A Biblical Complex,” HUCA 44 (1973): 1–54, is evaluated more positively, because it attempts a cultural synthesis. According to Mathias, this article requires updating, which is what he aims to do, in conversation with Jacob Wright and Michael Chan, and Francesca Stavrakopoulou. Mathias presents the case for employing social-scientific material exploring contemporary examples of levirate marriage, widow inheritance, and ghost marriage to interrogate a reader’s interpretive assumptions and cultural biases (pp. 52–60).

With chapters 3 to 6 as foundational, chapter 7 assesses the following texts with an eye to the common motifs of land, name, progeny, continuity, and death: Lot’s daughters (Gen 19), Judah and Tamar (Gen 38), the levirate law (Deut 25:5–10), the book of Ruth, the widow of Tekoa (2 Sam 13–14), Absalom’s monument (2 Sam 18:18), the promise to the eunuch (Isa 56:3–5), and Zelophehad’s daughters (Num 27; 36). My primary interest in reading this book is its intersection with the Ruth narrative; Mathias affirms the link between redemption and levirate marriage, which functions to link land, name, and progeny (p. 223).

Mathias adds a fresh contribution, which derives from his methodological matrix of social-scientific and gender studies. If we assume that the social circumstances behind each OT text he examines are consistent, his thesis is cogent. Broadly, I think we can, and I appreciated the book’s focus on the underlying social “doxa” behind the OT texts rather than on a hypothetical diachronic reconstruction. Mathias establishes sound conclusions in this study of post-mortem perpetuity in the OT from a social-scientific perspective and demonstrates that such an approach can be illuminating.

Themelios readers will want to extend his work. The paternity-progeny-perpetuation nexus connects to the metanarrative of Scripture in two ways. First, in the OT this nexus is central to God’s promise to Abraham (Gen 12:1–7), so this programmatic text needs to be integrated into the nexus. Mathias briefly looks at Gen 12 (p. 134) but more discussion is needed. He also broadens his analysis beyond his main selected texts by mentioning the development of resurrection in Daniel 12:2 (pp. 251–52), but he does not connect the dots through the OT. Second, Mathias’s work can be extended by viewing his findings in light of Christ and the NT. Christ changes our conception of paternity and parenthood, our view of heirs and children, and our perpetuation and legacy through name, children, and land. There are already hints of this shift in some of the Old Testament texts Mathias examines (esp. Isa 56:3–5). As Christians, we need to look at this nexus through the lens of Christ before we can consider the implications for and application to us today. One book to get us started is Paul R. Williamson’s Death and the Afterlife: Biblical Perspectives on Ultimate Questions, NSBT 44 (Downers Grove, IL: InterVarsity, 2017).