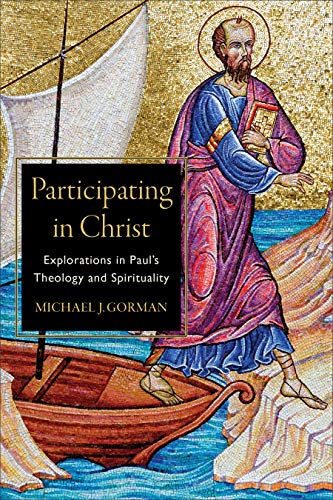 Participating in Christ: Explorations in Paul’s Theology and Spirituality

To adapt a Lukan parable, at a table of Pauline scholars Michael Gorman might be the most likely recipient of those gospel words, “Friend, move up here to a better place” (Luke 14:10 NET). As a former student of Dr. Gorman’s I can affirm that he pursues his scholarship with commendable humility and that his work is worthy of greater exaltation.

Gorman’s most recent publication endeavors to “expand, deepen, or reiterate” (p. xxiii) arguments and themes that he has explored for much of the last two decades. Of special note in his prefatory remarks is his designation of 2 Corinthians as the “highlighted letter” (p. xxiii) of the volume. The book is divided into two parts “Paul and Participation” (part 1) and “Paul and Participation Today” (part 2). The lion’s share of the book is allocated to part one (9 of the 11 chapters).

The introductory chapter, which takes the form of thirteen propositions, gives readers a framework for what follows in the book. Here, Gorman effectively summarizes much of his prior work on Paul and participation; those looking for a primer on the theology of Michael Gorman need look no further. Chapter 2 then attends to the cross-shaped nature of Paul’s thoughts about God, humanity, and the church.

For this reviewer chapter 3 is the gem of the work. Here Gorman adds further nuance to the idea of cruciformity that has been such an important part of his scholarship. This chapter is an irenic response to critiques of what some have thought to be a neglect of the resurrection in Gorman’s thought. Gorman argues that cruciformity should be retained as the foundational concept in Paul’s picture of the Christian life, but addends this claim with suggestions that the term can be appropriately prefixed as “resurrectional cruciformity” or “resurrection suffused cruciformity” (p. 74). The argument here is paradoxical and memorably depicted in paschal imagery, “To be in Christ is to embody continuously and simultaneously Good Friday and Easter” (p. 74).

Chapter 4 tries to address the “translational conundrum” (p. 77) of Philippians 2:5 by offering the following rendering: “Cultivate this mindset—this way of thinking, acting, and feeling—in your community, which is in fact a community in the Messiah Jesus” (p. 93). This result is achieved via a meticulous engagement with the relevant debates.

Chapters 6–8 are interconnected discussions of Pauline justification. They argue, in sum, that “justification, according to Paul, is both participatory and transformative—so transformative that the apostle describes it as resurrection to new life” (p. 115). It is at this point that the head nods coming from evangelical readers, likely frequent up to this point of the book, may come to a halt. In his readings of Galatians 2:15–21 (ch. 6), 2 Corinthians 5:14–21 (ch. 7), and Romans (ch. 8) Gorman seems to cut against imputed righteousness readings of Paul. His interpretation of 2 Corinthians 5:21 is representative in this regard. Gorman reads the righteousness of God in this text as a “human righteousness,” i.e., as referring to the transformation of believers into people who are actually righteous (pp. 171–72). He also seeks to distance himself from readings of Romans 4 that present Abraham as “fictitiously considered just or righteous” (p. 203). He further comments, “Paul is probably implying—to the chagrin of some interpreters—that Abraham’s faith consisted of faithfulness as well as belief or trust” (p. 201).

Despite the unease with which some will digest these justification chapters, most will find that the argument has critiqued simplistic Protestant readings more than those offered by more nuanced expositors. Gorman is careful to point out that he is not denying forensic elements of justification and he cites approvingly the readings of 2 Corinthians 5:21 offered by the likes of Mark Seifrid and George Guthrie. Even in the places where evangelicals will ultimately diverge from Gorman, they will find the deep engagement with Scripture in these chapters compelling.

The final two chapters (part 2) conclude the book on practical notes. Chapter 10 takes the form of an imaginative letter from Paul to the contemporary church in North America (this, Gorman notes, was styled after Martin Luther King Jr.’s sermon series “Paul’s Letter to American Christians”). In addition to being theologically and practically illuminating, Gorman’s letter is especially winsome as it has his imaginary Paul making reference to modern classics like John Barclay’s Paul and the Gift (Grand Rapids: Eerdmans, 2015) and Dietrich Bonhoeffer’s Discipleship, trans. B. Green and R. Krauss (Minneapolis: Fortress, 2001). The book then ends with chapter 11’s series of reflections on what it means to preach the resurrection today.

Gorman traces clearer lines than most from Jesus the Messiah to spirituality, discipleship, ecclesiology, and missiology. Participating in Christ displays his remarkably coherent—and Christological—exegesis of Paul. Certain readers, not least evangelical Protestants, will dispute some of the ways his lines of thinking move, but I suspect that most readers of this work will appreciate the consistency of Gorman’s thought and its grounding in Scripture. Readers will also appreciate the breadth of questions (both theological and practical) to which this work contributes. Gorman is an important voice at the Pauline table and readers of this text will be edified by this, his latest offering, to the academy and the church.