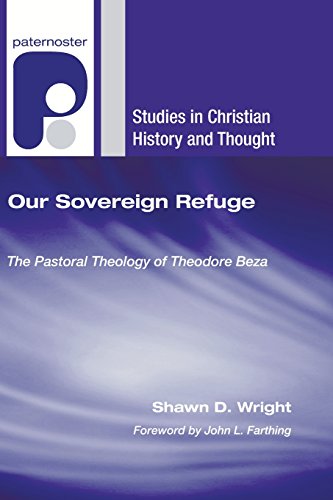 Our Sovereign Refuge: The Pastoral Theology Of Theodore Beza (Studies In Christian History And Thought)

This timely book is an exercise in theological rehabilitation. For too long Theodore Beza has been caricatured as the bogey man of post-Reformation Protestantism, the one who above all others sullied the pure waters of Calvin with his overly scholastic and gloomy insistence on predestination and God’s eternal decree. This inevitably led to an unhelpful and speculative introspection in the life of the Christian believer. Shawn Wright unapologetically sets out to put the record straight and view Beza from a much more sympathetic viewpoint than previous scholars, emphasizing instead Beza’s passionate pastoral concern for those entrusted to his care.

Wright helpfully, and indeed unusually, carefully places the Frenchman Beza within his political-historical context of the Swiss city of Geneva after Calvin’s death, besieged by the Catholic forces of the Duke of Savoy and often ravaged by the plague. French Protestants had been dealt a fatal blow in the 1572 St Bartholomew’s Day massacre and Beza felt his own life was seriously threatened. As Wright ably shows, it is unsurprising, therefore, that Beza was called upon to bring solace and comfort to the distressed Reformed population of Geneva, which included many exiles. His whole corpus of writings shows a distinct eschatological flavour, where the stark reality of eternity in either heaven or hell is passionately delineated and the Christian is under no illusion that their spiritual pilgrimage will involve a constant and deadly struggle against Satan until they find their rest in heaven. Pastor Beza is thus constantly preoccupied with bringing assurance to the Church of Christ and, perhaps surprisingly for those who thought him obsessed with supralapsarian predestination, locates the loci of assurance in a multiform way, including God’s character and promises, the work of Christ, faith, the Holy Spirit, the church, prayer and heaven. Indeed, Wright’s lucid exposition of this assurance is one of the great strengths of this volume and the reader is humbled by the numerous divine means by which the Christian is brought closer to God.

Although at times repetitive, the great strength of Wright’s book is the close textual analysis of the whole range of Bezan writings, from letters and prayers, to catechisms and complex systematic treatises. Previous studies have tended to rely upon those works that focused on the themes of predestination, which gives a seriously skewed perspective on what Beza was trying to achieve. Among the many useful elements in Wright’s work is Appendix 1, a table of Beza’s works from 1548–1603 helpfully divided up into the different genres of humanistic, polemical, doctrinal, biblical, historical and pastoral, together with details of translations. This shows the incredible diversity and range of works that came from Beza’s pen and the enduring influence he had on later Reformed theology.

The author carefully examines Beza’s methodology to show his qualified use of humanist learning to understand correctly the vital teaching of the Word of God, further enhanced by a judicial use of scholasticism, rhetoric and philosophy. As a teacher at the Genevan Academy, Beza’s importance as an educator should not be overlooked: the Christian needs to be able to withstand Satan’s attacks, whether in the form of a pestilent plague, a persistent and debilitating doubt, or an heretical publication from a false teacher. Realistically equipping the saints was something of a lifelong passion for Beza, whether by a sermon, a lecture, a private conversation, or an involved polemical and theological treatise.

By way of a conclusion, Wright makes a brief, but illuminating foray into the ‘Calvin versus the Calvinists’ controversy, suggesting that the differences between Calvin and his handpicked successor Beza, have been grossly exaggerated. Both are concerned to be Christocentric, Trinitarian and biblical in their theology, and at all times, godly pastors called to protect and strengthen the Church of Jesus Christ.