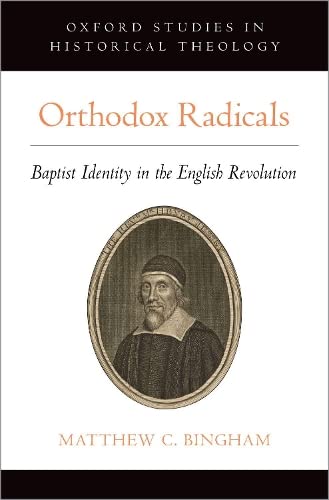 Matthew Bingham, lecturer in systematic theology and church history at Oak Hill College in London, sets out in Orthodox Radicals to properly locate “Baptist” identity in mid-seventeenth century England. He claims that the category of “Baptist” is an eighteenth-century invention imposed anachronistically on the mid-seventeenth century (p. 10). While most have lumped Baptists into a “pan-Baptist” identity retrospectively, he contends that this obscures rather than clarifies. Baptistic tendencies alone did not automatically create a “Pan-Baptist identity ex nihilo” from which differing kinds of Baptists could be grouped (p. 91). Therefore, Orthodox Radicals intends to show the problems with the historical “Baptist” label for the mid-seventeenth century and show a better interpretive way forward.

Bingham defends his thesis with five chapters that engage various historical aspects of Baptist identity, focusing especially on those commonly called “Particular” Baptists in England. The first chapter sketches the beginnings of Baptist identity and the circle of London Calvinistic Baptist churches. The brief narrative he provides is largely uncontested. What is novel about his reassessment is that while most historians have assigned the labels of Particular and General Baptists to the early English Baptists, Bingham finds this problematic and shows that there is absolutely no evidence for a joint “Baptist” identity that could dovetail over soteriological differences. While those typically identified as Particular Baptists were willing to associate with paedobaptists, they outright rejected Arminianism (p. 22). Therefore, shifts in baptismal positions did not create a new “Baptist” identity from which Particular and General could be grouped. In reality, baptismal shifts for Calvinistic congregational churches were the “natural and unavoidable consequence of the congregational principles to which they were already devoted” (p. 37). So, instead of a joint “Baptist” identity, Particular Baptists emerged from congregational churches and remained in solid connection and cooperation despite their baptismal adjustments.

The fourth chapter shows the positive fortunes of Calvinistic English Baptists during the 1650s, where those of the Magisterial Reformation willingly linked them with the party of “wise Presbyterians” (p. 90). None of the 1648 Blasphemy Ordinance’s “heretical” positions were rehabilitated and allowed to flourish openly during the 1650’s except for the rejection of paedobaptism (p. 101). And even Cromwell himself conflated baptistic and paedobaptistic congregationalists under the same term “independent” (p. 113). The conclusion from such actions is clear—these “Baptists” should be understood as baptistic congregationalists rather than a brand new “Baptist” identity. The fifth and final chapter recounts baptistic self-identity during the interregnum (1649–1660). During this period two baptistic congregationalist styles emerged—one willingly embraced Cromwell’s regime and encouraging ecumenism, while the other became stringently separatist (p. 122). These Calvinistic baptistic groups, according to Bingham, are sufficiently different in their own identities that they should not be understood under a single label of “Baptist,” which isn’t to say anything of their differences with the General Baptists (p. 146). Thus, Bingham concludes that it is better to identify those Calvinistic Baptists of mid-seventeenth century England as baptistic congregationalists rather than Particular Baptists. Grouping them all as “Baptist” gives the faux impression that they were meaningfully connected and closely linked to other baptistic groups such as the “General Baptists.”

In making his argument, Bingham handles the historical evidence with careful precision, constructing an airtight argument against previous historical work. In doing so he has provided a treasure trove for Calvinistic Baptists to study and embody in their contemporary congregations. He also has served contemporary Post-Reformation scholarship of English theological identity. Bingham fills a gap which he notes in his introduction that “there is still no holistic, theologically sensitive yet historically rigorous study of mid-seventeenth-century Particular Baptists” (p. 7). His label of “baptistic congregationalist” better describes the identity of these early English “Baptists” and identifies their heritage appropriately. Besides his historical and theological conclusions, Bingham also writes with exceptional clarity and ease. One is never in doubt as to his point, his thesis, and his overall mode of argumentation.

This reviewer suggests a minor point of clarification and critique. First, readers should be advised that Bingham offers a focused monograph, rather than a general introduction. Readers looking for a larger scale treatise will have to look elsewhere. Second, the title mentions “Orthodox Radicals,” but this phrase is not explained or defined in the way one may wish.

In summary, Bingham’s work is one of ingenuity and rigorous historical scholarship. It is one all scholars of the Protestant Reformation should consult and one all Baptists should consume. His thesis should put to rest any thought that “Baptists” grew out of the Reformation as a distinct and homogenous group with a unified identity.