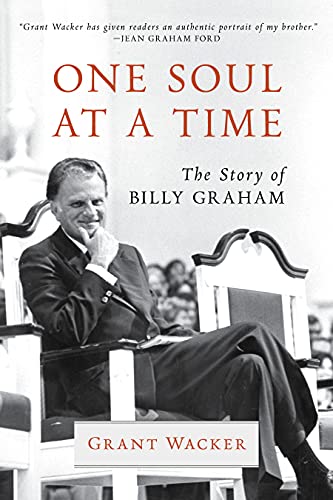 One Soul at a Time: The Story of Billy Graham

Billy Graham, appropriately designated “America’s pastor” by George W. Bush, is the only religious leader in American history whose casket has rested in the rotunda of the United States Capitol. While Graham served as a religious advisor to twelve consecutive presidents, he never held a political position, choosing instead to remain a minister of the good news of Jesus Christ. Historian Grant Wacker’s concise biography presents Billy Graham’s influential public career as an evangelist.

Grant Wacker is the Gilbert T. Rowe professor emeritus of Christian history at Duke Divinity School. He is considered the leading Billy Graham scholar, having authored significant works such as America’s Pastor: Billy Graham and the Shaping of a Nation (Cambridge, MA: Belknap, 2014). Wacker, a self-designated Christian in the evangelical tradition, is highly suited to tell Graham’s story, having spent his career specializing in the history of Evangelicalism, World Missions, and American Protestant thought.

While previous works on Graham focus on his relation to the nation’s culture, One Soul at a Time: The Story of Billy Graham explores Graham’s ministerial life and influence. This biography is based on decades of research on Graham, including personal interviews, archival inquiries, new research, and previously unpublished photographs. In 51 short chapters neatly divided into four parts, Wacker portrays Graham’s finely tuned ability to understand trends and speak to individuals in a powerful, life-changing way. While Graham continually adapted the fine nuances of his approach, Wacker effectively demonstrates how his heart for sharing the gospel never changed.

In contrast to his earlier more philosophically sophisticated historical works, Wacker takes a more belief-inflected historical approach by telling the story the way he thinks Billy would have, focusing on God’s work accomplished through the evangelist (p. xiii). He traces his development, beginning with the “Young Barnstormer,” then moving on to his role as “Leading Evangelist,” “Priestly Prophet,” and finally “Senior Statesman.” In the first section, he examines Graham’s Southern farm boy roots, college years, and early days of ministry. He includes his early pastoral challenges and how they helped prepare him for his future evangelistic ministry. The historian points out three of Graham’s enduring traits that led to vocational success: his pragmatism, his well-chosen ministry settings, and his sensitively timed crusades. Furthermore, he describes how his engagement with President Eisenhower reveals the pivotal role he had as “a pastor to the presidents” (p. 59).

Part 2 examines how Graham inspired evangelicals to participate in the public sphere. The core for Graham, however, was always the gospel. Graham promoted it by using the latest advances, such as live broadcasting of his crusades. Wacker points out that “everything Graham said and did behind the pulpit pointed toward one goal: the invitation” to follow Jesus (p. 95). While his enduring legacy primarily rests on people’s positive response to this invitation, Graham also faced opposition, both from the outside and within evangelicalism. Wacker admiringly points out how the Evangelist consistently chose not to retaliate to his opponents and instead focused on the gospel.

The third section chronicles Billy Graham’s significant role in American culture and politics. Wacker recounts Graham’s unique relationship with Roman Catholics and political leaders such as President Johnson. While Graham’s legacy primarily lay in his evangelistic efforts, his work toward waging war on poverty, his contributions to civil rights, and his role in the Vietnam War are also memorable, even if not always positively viewed. Wacker also points out how he was often perceived as a “symbol of the American good life” due to his close friendships with presidents and celebrities, rather “than as a prophetic critic of it” (pp. 175–76).

In the final part of his book, Wacker examines Graham’s enduring message that the gospel offers forgiveness to all. Wacker notes how the American preacher’s ambition for the evangelization of the whole world became even more conspicuous beginning in the 1960s. Graham’s “looks, style, sincerity, humility, and urgency, which propelled his success at home, propelled his success abroad” (p. 203). Yet Graham also received sharp criticism for his international work, including his unconventional ministry in the Soviet Union. Graham’s venerable nature, however, made him the natural choice to be both an international evangelist as well as the “nation’s chaplain” in times of crisis. Wacker concludes that Graham was a complicated man who evoked both criticism and praise, but “diligently sought never to forget God, not Billy Graham, was the one true source of his success. He walked the talk” (p. 275). He wraps up the narrative with a powerful epilogue about Graham’s impact on children, as evidenced in their letters to him (p. 277). The book also includes two helpful appendices on his letters and preaching events, extensive endnotes, and a detailed index.

Overall, Wacker’s well-researched book does an excellent job portraying the “public” Billy Graham. This work skillfully reveals the Evangelist’s “singular ability to appropriate the trends of his day” in service of the gospel and moral reform (p. 5). His example remains a powerful legacy for evangelicals today who desire to proclaim the gospel to the current culture. While Wacker clearly respects Billy, he candidly discusses his flaws, including his naive loyalty to Nixon during the Watergate scandal. Yet his admiration for Graham leads him occasionally to excuse his missteps. For instance, he concludes that the Watergate incident may “have been the best thing that ever happened to the preacher. The experience opened his eyes to the dangers of dragging partisan politics into the pulpit” (p. 178). One Soul at a Time might be better subtitled A Profile of America’s Most Famous Evangelist since it primarily focuses on Graham’s public role as an evangelist and only briefly touches on his theology, inner life, and familial relationships. It reads at times more like news soundbites than as a cohesive, gripping story of his life. Therefore, it would appeal to an audience interested in the facts about one of the nation’s most influential religious figures to date. While the details are fascinating, for instance, Graham’s humanitarian evolution or his unique relationship with presidents and Catholic leaders, it is not a page-turner, nor does it intend to be so. Instead, it does what it sets out to do: to portray a compelling picture of the famous American Evangelist from the South.