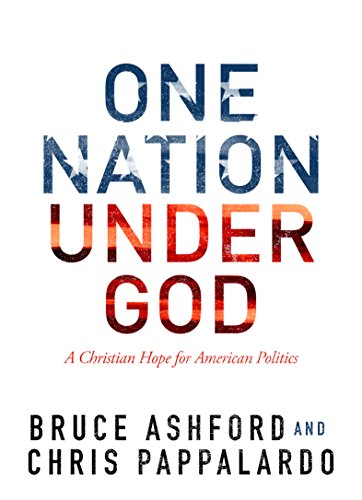 The political scene in contemporary America is tragicomic. Every hard-fought victory is expunged by twice as many glib losses, or so it feels anyway. American political discourse includes a tremendous amount of noise about hope, but little in the way of actual hope. The many varieties of despair parade like garish celebrity floats through our social consciousness, vapid and unending.

We therefore have Bruce Ashford and Chris Pappalardo to thank for offering us this compact primer, One Nation Under God: A Christian Hope for American Politics. I stress the word “hope” because that is the express aim of the authors: to inspire hope in a Christian readership. All is not lost. Quite the contrary, the church has a powerful, irrevocable mission to bring a message of hope—the good news in Jesus Christ. The enduring challenge, of course, is how best to express that news within our respective political orders. One Nation Under God represents one such expression, so allow me here to explain what the book does and how it goes about doing it.

The book is divided into two parts. A concise summary of the first part might go as follows: All politics is theological. That idea is a presumption of political theology today—there is something political about theology and something theological about politics. Ashford and Pappalardo similarly assume that politics is theological all the way down. Our soteriology doesn’t just tell us something about the nature of our redemption in Christ, for example, but also about the very essence of justice itself. In so many respects Christian theology is a political story, beginning and ending with Christ Jesus.

Politics requires theological interpretation, however, and the pre-requisite to theological interpretation on the authors’ account is an understanding of meta-history with four acts—creation, fall, redemption, and restoration. The church derives its understanding of politics from the wider story of God’s purposes for the world, which in turn rightly orients the faith community to the order of the world.

But it’s never just “a world” we encounter. Our world is also the site of our respective publics and politics. The church itself, in all its localities, shares a relation to the public and to the politics governing it. According to the authors, a distinctly Christian understanding of politics allows neither for absorption or withdrawal, but instead stresses a renewal and restoration of politics. Our publics are a context for just and charitable actions—for the undertaking of good works, and thus when Christians act faithfully in the world they demonstrate that the fundamental truth of Christianity transcends subjectivity. No faith worthy of the name can be reduced to quaint personal opinion. Christianity makes claims. The gospel itself, Ashford and Pappalardo inveigh, doesn’t just contain truth—it is true, and its universality pervades all particulars of Christian existence. Christianity is by necessity a public faith.

Because the Church is public it bears some relation to the state. The way to put the question is “how Christians bring their faith commitments to bear in politics?” (p. 33). Answers to such a question will depend, of course, on historical, geographic, and other contingencies. The church’s relation to the state is never static. The authors outline responses of Jesus, Paul, and Peter to the question of church and state. Stress is placed on the organic rather than institutional nature of the church. The membership and mission of the church far surpasses earthly politics wherever and whenever the church dwells upon the earth. One cannot be an American Christian, in other words, but a Christian who just happens to be American.

Ashford and Pappalardo underscore the importance of persuasion in public life, which in a post-Christian context will require forms living and speaking that grasp the conditions of contemporary pluralism. On this point chapters 5 and 6 dovetail to explain both the kind of pluralism we’ve inherited and to extol the wisdom and virtue needed to live faithfully within it. These constructive sections reinforce the modest proposal of dwelling in the polis with civility. The Christian should be realistic about where she finds herself, about seeking the city’s good, and about how best to articulate the truths that most need public articulation, all on the “long view” of Christ’s completion of all things.

The second part of the book represents an effort to apply the principals of the first part to a select sample of contested policy issues: life and death, marriage and sexuality, economy, creation care, racial diversity, immigration, and warfare. Each chapter sketches the general contours of an issue and concludes with a few discussion questions (for groups) and some recommendations for further reading. One of the overarching (and much appreciated) purposes of this second part is to redress trite polarities of contemporary debates by carefully recasting the terms of discourse. Formulating clear responses requires that we first get the questions right.

It is important to bear in mind that although the topical sweep of this book is rather broad, its aims within that scope are comparatively modest. The kingdom of God orders the political life of the church both internally and externally. Christ’s jurisdiction is all encompassing. The church is a people living in collective deference to Christ’s rule, and that truth inspires hope for politics. This means there is no ready-made algorithm for Christians living between the times. We cannot anticipate all the challenges that may arise or portend how modern society will reckon with them, and so the church relies upon God for the faith, hope, and love necessary to represent Truth in the world.

Now, not every issue-sketch offered in part two is wholly convincing. The chapters on economy and ecology, for example, are somewhat oversimplified and don’t advance ecclesial discussions quite as well as other chapters. It would also have been helpful to hear a bit more about what it means to be public. Someone who may wish to be public is never granted audience, and likewise someone who wishes to avoid publicity is spotlighted by accident. These sort of disjunctions happen all the time. But books of this nature tend to have an exposed flank or two, and in identifying a couple of them I mean primarily to underscore the authors’ narrow aims: to approach politics with a theological sensitivity that inspires hope in the people of God for their God. After all, being under the authority of God is humanity’s only hope.