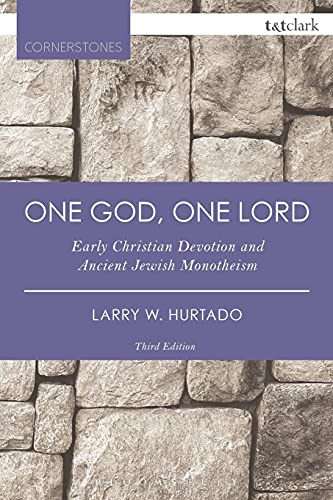 One God, One Lord

This book is an important new study of the evidence relating to the worship of Jesus in the early church and its relationship to the religious climate in which it originated. The author rejects the idea that the cult of Jesus was the result of a relatively late Hellenistic influence on the early Christians, and demonstrates that it can be found in the earliest strands of Palestinian Jewish Christianity. As he says (p. 11): ‘the evidence suggests strongly that … well before these later developments, within the first two decades of Christianity, Jewish Christians gathered in Jesus’ name for worship, prayed to him and sang hymns to him, regarded him as exalted to a position of heavenly rule above all angelic orders, appropriated to him titles and Old Testament passages originally referring to God, sought to bring fellow Jews as well as Gentiles to embrace him as the divinely appointed redeemer, and in general redefined their devotion to the God of their fathers so as to include the veneration of Jesus’.

From there he goes on to claim that ancient Judaism had a concept of ‘divine agency’ which made it easier for these Jewish Christians to accept that Jesus might be ‘exalted to the right hand of God’ and that early Christian religious experience produced modifications to this Jewish idea which made their devotion to Christ sui generis. With great care he takes us through the various types of divine agent which can be found in Judaism—personifications of divine attributes, exalted patriarchs and ministering angels. In each case he shows that the Jews were never tempted to abandon their traditional monotheism, and always regarded these agents as subordinate to the being of God himself. Then he devotes himself to what he calls the early Christian ‘mutation’, showing how this went well beyond anything which had come before.

In all this it is clear that Hurtado is confronting the tradition, developed by Bousset and preserved by a host of disciples, which denied that the worship of Jesus was ever an authentic part of Jewish Christianity. In particular he makes it plain that this development has nothing to do with the apostle Paul, who took it over in an already existing state. But what was it that made the first Christians take this great and decisive step? Here Dr Hurtado is less satisfactory, suggesting that it was a combination of reflection on their part and a common experience of worship. The idea that Jesus himself might have taught his disciples that he was God is still not seriously considered, with the result that we are presented with a great event which seems to have an inadequate cause.

Nevertheless, there is no doubt that Dr Hurtado comes down strongly on the conservative side at those points which matter most to him. This book may well help to shift the discussion of Christian origins into a new and more positive phase, and for this we must be profoundly grateful.