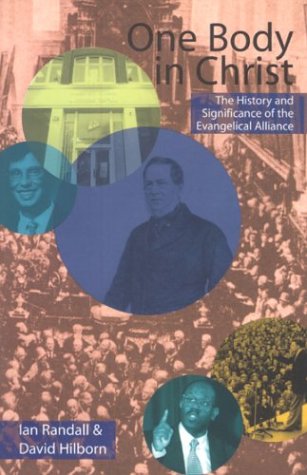 ONE BODY IN CHRIST. THE HISTORY AND SIGNIFICANCE OF THE EVANGELICAL ALLIANCE

This book traces the Evangelical Alliance from its start in 1846 up to 2001, using previously uninvestigated archives. A ‘Conclusion’ at the end of each chapter sums up the main points. The authors set out what they see as the EA’s significance.

The 14 chapters describe EA’s background, its social actions, its theological controversies (e.g. Darwinism and biblical criticism), its international vision, its ‘comprehensiveness within the truth’ (in relation to liberalism and fundamentalism) and its attitude to ecumenism, evangelism (and Billy Graham), the charismatic movement and ‘social transformation’. Six appendices give various basic documents.

Before 1846 evangelicals in ‘Establishment’ and ‘Dissent’ had often been at loggerheads, differing over doctrinal and other issues, but the recognition of common enemies helped evangelical unity, e.g. ‘the need for a more united evangelical front against Tractarian growth’ (27). The EA was started in order to unite individuals, not denominations, though local churches were later allowed to join.

The authors describe leading EA figures, including the last five General Secretaries (now ‘Directors General’ I), whom incidentally this reviewer has known. The stance of the authors, one of whom in on EA staff, is of enthusiasm for the Alliance. Their insider knowledge is informative, but makes an objective critique of its significance difficult. The assessment offered is mainly by reference to the EA’s, own aims and activities rather than by wider criteria. Several features of the book’s picture call for comment.

The first concerns the nature of the EA, which is repeatedly commended and described in such terms as broad, central, comprehensive or inclusive. The opening chapter, ‘A Broadly Based Religious Force’, shows the common concern that it ‘should adopt an inclusive approach and thereby exhibit “catholicity” … to draw together so many who have differed on important issues, but who have nonetheless taken their shared convictions to be a positive basis for cooperation’ (1). This broadness appears throughout, e.g. in the EA’s ‘benevolent neutrality’ towards the doctrinally defective ecumenical movement.

The second feature is EA’s strong social concern. The founding conference’s concentration ‘was on practical, socio-ethical matters’ (46); an 1893 conference was ‘concern(ed) about the social mission of the church’ and ‘gave most attention’ to that (147). ‘Mission was being increasingly interpreted not only in terms of spiritual endeavour but also social action’ (149). EA has taken up many such issues and devoted much of its later media voice to them. Clive Calver wanted ‘effective social impact’ (286). Joel Edwards speaks of ‘a recommitment to social transformation’ (347). Not recorded here is one leading EA figure’s view that it should be really be called the Evangelical Social Alliance, since that is what it effectively is and what it is actually fitted to do.

The third feature concerns the status and application of the EA’s doctrinal basis. The chief framer of the provisional Doctrinal Basis of 1845 said ‘that it was not meant to be a creed to which all would have to concur, but rather “a general statement” ’ (41). The authors describe that as ‘a very important caveat’—clearly one of ongoing significance. The 1846 basis inserted affirmation of ‘the eternal punishment of the wicked’, thus rebutting annihilationism and upholding the traditional view. An EA Honorary Secretary whose 1867 book took a non-traditional view of hell eventually had to resign. That would be unlikely today, since the book shows how attitudes to the DB’s wording have changed; annihilationism and conditional immortality have gained ‘a degree of acceptance’ and the EA’s own theological commission recognised conditionalism as a ‘significant minority evangelical view’ (132). The book infers some uncertainty at various points about where EA stands, acknowledging, for example, that Clive Calver’s leadership raised questions about whether it ‘had become a mainly charismatic body’ (301).

This account does not touch on what EA does when the DB is passed over—or when members argue in print against a central clause (e.g. clause 4 of the 1970 DB on substitutionary atonement). Apparently nothing. The narrative gives little hint that truth is seen to have a narrowness as well as a broadness, that sometimes Christians are called to defend or contend for truth or that being positive for truth sometimes requires being negative about error.

The fourth feature concerns EA’s place in the total evangelical scene. This book sees the EA as centre-stage and largely neglects many agencies that have fostered definite evangelical unity in crucial if less publicised ways—and continue to do so. The British Evangelical Council is mentioned, but virtually unrecorded is the huge past and present contribution of many other interdenominational bodies. In a reappraisal in 1968 General Secretary Morgan Derham ‘suggested that the Alliance should be “a compact information and service agency” ’, move ‘out of the world of evangelical politics … and acknowledge the self-sufficiency of most evangelical groups and movements’ (275). Interesting; but the suggestion was not pursued.

The EA recognises ‘that not all who seek to know and serve Christ as Saviour and Lord will wish to be members of the Alliance’ and some of the most outstanding evangelicals have had, to say the least, ‘a complex relationship’ with the EA. C. H. Spurgeon resigned at one point, Dr Martyn Lloyd-Jones never joined. Spurgeon expressed more definite convictions about Scripture than the EA, Lloyd-Jones challenged the validity of the EA’s commitment to comprehensiveness (177, 206). How revealing then of EA’s mind was Gilbert Kirby’s reflection that ‘encouraging Lloyd-Jones to put his case (at the turning-point 1966 National Assembly of Evangelicals) has been “probably one of my biggest mistakes” ’ (250)?

The book performs a valuable service in giving us a previously missing story, but the EA needs to be set in the context of all else that was and is now going on in relation to unity in the gospel if its significance is to be truly assessed.

The General Secretary of the IVF was Douglas Johnson, not Johnston.