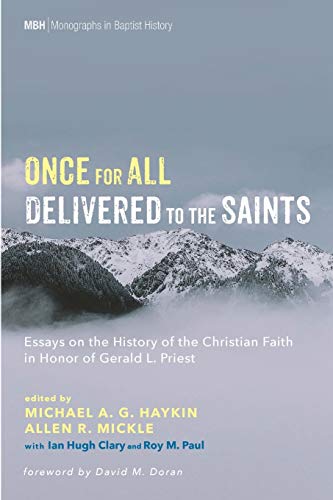 Once for All Delivered to the Saints: Essays on the History of the Christian Faith in Honor of Gerald L. Priest

Gerald L. Priest served as professor of historical and practical theology at Detroit Baptist Theological Seminary for over two decades from 1988 until his retirement in 2010. Prior to his academic appointment, he completed MDiv and PhD studies at Bob Jones University. His primary contributions to scholarship included numerous journal articles and essays related to Baptist studies. However, as the biographical essay at the beginning of this monograph details, Priest’s influence extended far beyond the academy, as he ministered as chaplain for the National Guard and filled numerous pulpits during his life.

In the first article, John Aloisi critiques the concept of natural and moral inability expressed in Edwards’s Freedom of the Will (1754), concluding that the distinction contains as many weaknesses as it does strengths. While Aloisi repeats several objections raised by critics since Edwards first published the work, he also demonstrates that Andrew Fuller readily adopted this terminology in his theological confrontation of high Calvinism in his Gospel Worthy of All Acceptation. The other two articles in the first half of this work discuss two implications of Fuller’s evangelical theology. First, Andrew Fuller’s rejection of high Calvinism included a denial of Antinomianism. Accordingly, Michael A. G. Haykin explores the topic of good works and their necessity in eighteenth-century Particular Baptist thought. According to evangelical theologians such as Fuller, both faith and sanctification were duties commanded by Scripture. Haykin demonstrates this conviction in the ministries of influential Baptists such as Robert Hall Jr. (1764–1831), Caleb Evans (1737–1791), and John Ryland Jr. (1753–1825). The final essay of this section, written by Allen R. Mickle Jr., concludes with a discussion of Fuller’s thoughts on preaching.

The final three chapters of the work consider yet another significant theme in Gerald Priest’s career: the history of liberal theology and Fundamentalism in the twentieth century. Chapters 6–7 consider the development of American liberalism in the theology of William Newton Clarke (1841–1912) and George Burman Foster (1858–1918), respectively. These essays offer biographical accounts of the perceived downward spiral of academic theology in the late nineteenth century and position Fundamentalism as the proper response to this trend, a viewpoint present in several of Priest’s publications. The final article concludes the work with an examination of Fundamentalist historiography in the writings of Clarence Macartney (1879–1957), a prominent pastor and amateur historian of the American Civil War. Macartney’s published accounts of the Civil War demonstrate conservative beliefs in his selection of material as well as accrediting events to God’s providence. The essay presents both strengths and weaknesses of such an approach.

Once for All Delivered to the Saints offers several positive contributions to the study of historical theology. Like most works of its kind, this tribute to Gerald Priest approaches numerous topics from diverse perspectives, and the essays vary in style and quality of material. Nonetheless, several common themes unite the articles into one work. First, like most Festschriften, the articles approach historical topics which proved significant in Priest’s academic career. The editors have arranged the material topically, resulting in a cohesive, singular volume. Similarly, the essays of this work are united by a common Christian framework. While the authors may not always agree on the strengths and shortfalls of various movements in contemporary theology, they join Gerald Priest in a commitment to scholarship from a conservative Christian perspective. These harmonies characterize the work as a readable and beneficial contribution of historical theology.

This collection of essays will attract readership from several backgrounds. Students of historical theology will find a unique compilation of both academic and pastoral approaches to influential thinkers such as Jonathan Edwards, Andrew Fuller, William Newton Clarke, and George Burman Foster. Readers interested in American history will discover articles related to the rise of liberal theology in the late nineteenth century as well as the response and contributions of Fundamentalists in the twentieth century. Finally, those influenced by the ministry and scholarship of Gerald L. Priest will enjoy this tribute centered around themes that captivated his interest and prompted his academic career.