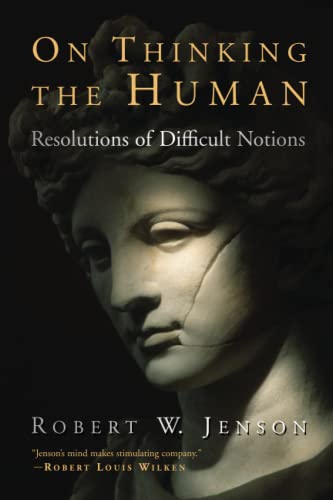 On Thinking The Human: Resolutions Of Difficult Notions

The liveliness, creativity and rigour of Robert Jenson’s thought and expression have made him one of the most stimulating theologians of the last half-century. However, his work has rarely been very accessible. This latest monograph—more appealing in its brevity, despite the fact it take careful reading—serves not only as an absorbing study in anthropology, but perhaps even more as a welcome introduction to Jenson’s profound mind.

Jenson’s general approach to anthropology is not a surprising one for so robustly Christocentric a theologian, and he makes no bones about it. He begins with a blast against and attempt to create an anthropology ‘from below’, describing Socrates’ advice to ‘know yourself’ as the prime error in seeking to understand what it is to be human. He then goes on to condemn, on a number of fronts, our contemporary culture of introspection. In its place he advocates a Christ-centred alternative in which human reality is subsequent to, and therefore only comprehensible in the light of the prior reality of the triune Go who reveals himself in Jesus Christ.

The main text of the book then consists of Jenson ‘thinking the human’ by addressing six ‘difficult notions’: death, consciousness, freedom, reality, wickedness, and love. The result of examining each topic with his methodology is both startling and thought-provoking. The first chapter, ‘Thinking Death’, for instance, though it assumes rather hastily that ‘death’ means annihilation, turns our instinctive thoughts on their head. For instance: ‘Correctly to deploy the concept of my own death, I must begin with “God the Son died” ’ (10).

Much the same kind of mental flip happens in the second chapter entitled ‘Thinking consciousness’. In destroying solipsism as a viable philosophical option, Jenson writes: ‘So—what is it to be conscious? It is either to be one identity of the living triune God or to be one of the community for which this God makes narratively structured space in his life’ (30). Thus the Cartesian understanding of consciousness is utterly replaced by an understanding of relationship (with God, primarily) as constitutive of consciousness.

The next chapter rejects the notion of freedom as an individual quality by understanding freedom as the freedom-in-community of the Father, Son and Spirit, Thus Jenson says, ‘What we do not want is “the” free will—unless by that we simply mean God’ (45).

The fourth chapter on reality displays his methodology best. So, on characteristically Lutheran form, he argues that ‘we suppose there is some other criterion of reality, by which the Son’s presence is to be measured. There is none; rather, our grasp of the Son’s real body and blood is the criterion of all our other attempts to grasp something real’ (57).

Wickedness is then dealt with in similar fashion as the negation and absence of the proper end of human community (which is participation in the Trinitarian communion). And finally, ‘Thinking Love’ probes the nature of love as we can learn it from the interactions of the Father, Son and Spirit (the Spirit thus being seen as the agent of all true love).

Many of Jenson’s observations flow from theological assumptions that Jenson does not put on display here and with which readers are sure to disagree at some point. However, in spite of such theological differences, I would recommend this book as an invigorating and deeply challenging read.