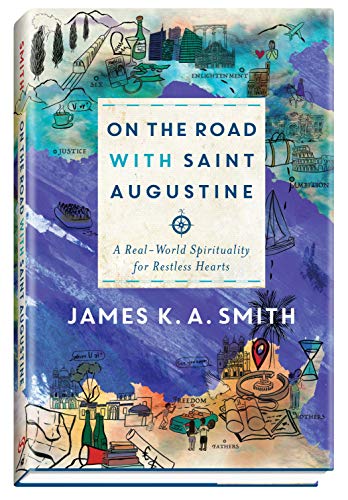 On the Road with Saint Augustine: A Real-World Spirituality for Restless Hearts

Written by James K. A. Smith Reviewed By Zachary A. Howard
History and Historical Theology

Life in the 21st century can be a disorienting journey. Many often feel lost, stuck, or out of control. The road ahead can seem endless, the signage confusing, and the destination uncertain. To navigate life’s journey in our secular age James K. A. Smith commends Augustine as a guide because he knows where home and rest can be found (p. xii). Augustine knows that “You have made us for yourself, and our hearts are restless until they rest in you” (Confessions, 1.1.1).

Like Augustine’s Confessions, Smith’s book defies simple genre categorization. It’s not a biography nor an exposition of the Confessions. Smith insists it’s not even “about Augustine” but rather “a book Augustine has written about you” (p. xi). Although every chapter subtitle begins with “How to…” (e.g., “Freedom: How to escape” or “Sex: How to connect”), it’s no self-help book on common crises or the spiritual disciplines. Nor is it merely an apologetic for prodigals. Instead, it is a “travelogue of the heart” (p. xi) and “a hitchhiker’s guide to the cosmos for wandering hearts” (p. 55). Smith channels Augustine’s road-savvy wisdom into a 250-page heart atlas aimed at guiding restless hearts home to God.

In Part 1, Smith claims that our age of authenticity “is already Augustinian” even if we don’t recognize his influence (p. 34). Augustine is our contemporary because he asks the same kinds of questions we ask. In Smith’s telling, we have inherited the quest for authenticity from Augustine, but our own questions are mediated by an eclectic group of existentialists like Heidegger, Sartre, and Camus—each of whom wrestled with Augustine in their own work. Although Augustine’s questions reverberate through their work, Smith argues that they rejected his answers. Smith wants his readers to return to Augustine’s answers and to consider them alongside the questions his legacy has taught us to ask.

In Part 2, Smith charts ten “weigh stations” along the road to which our own—and Augustine’s—longings bring us. These longings are the desires we all have for freedom, ambition, sex, mothers, friendship, enlightenment, story, justice, fathers, death, and homecoming. In each chapter, Smith first exposes the way we—and the unconverted Augustine—would naturally think about a topic (i.e., freedom or justice). Then he invites us to reconsider the issue in a new way—the way Augustine defends after a life spent encountering Christ and his Word. For example, Smith points to Augustine’s exploration of freedom before his conversion and then his commentary on freedom as a seasoned pastor. Commonly, freedom is thought of as the absence of constraints, as self-discovery without limits. Augustine tried that too. But he discovered that the unconstrained self finds not freedom but addiction. According to Augustine, “Free choice is sufficient for evil, but hardly for good” (p. 68). Instead, true freedom begins in dependence; it begins with grace. “To desire the aid of grace,” Augustine writes, “is the beginning of grace” (p. 67). Smith emphasizes that for Augustine, grace comes wrapped in the gift of constraints, laws, and guardrails that guide us home.

As Smith guides us through each of these “weigh stations,” every reader will identify with some of Augustine’s longings more than others. Similarly, the sheer range of references Smith makes to cultural artifacts—song lyrics, movie scenes, and contemporary book titles—will doubtlessly appeal to many readers but may bewilder others. The further you travel into the book, the clearer it becomes that Smith is not just the narrator; he is along for the ride too. Smith weaves his own story alongside his analysis of Augustine’s spiritual biography. As he notes in the Acknowledgements, “I feel like I’ve been writing the book for half my life” (p. 224). The book has the atmosphere of both Smith and Augustine’s personal experience, and in Smith’s retelling, both become fellow travelers with us—travelers who know how hard the road is but don’t offer false shortcuts. Rather, they turn us to the One who has sustained them on the road and will do the same for us.

Throughout the book, Smith displays his abilities as an interpreter par excellence. Like his Whose Afraid of Postmodernism? Taking Derrida, Lyotard, and Foucault to Church (Grand Rapids: Baker Academic, 2006) and How (Not) to be Secular: Reading Charles Taylor (Grand Rapids: Eerdmans, 2014), Smith makes the complex accessible. In this book, Smith speaks primarily to two overlapping audiences: first, so-called “Nones” who hate religious moralism and, second, young prodigals heading out the church door. To the first, Smith provides Augustine’s biography to make “Christianity believable” and Smith urges the second to consider Augustine’s Christianity “before you stop believing” (p. xiii). Thus, Smith interprets so that his readers act. Smith is not helping us comprehend the Confessions directly, but rather he is helping us decipher our own longings so that we direct them appropriately. Smith presents Augustine’s “real-world spirituality” to help us know ourselves and know the road.

In this way, Smith does not merely contemporize Augustine but retrieves him for us. After teaching the Confessions to college students for several years now, I have found Augustine resonates deeply with students, but he still baffles them and, therefore, often feels distant from them. Smith doesn’t smooth over the strangeness, but he allows Augustine’s ancient vibes to catch our attention. Then he shows us how Augustine’s questions and experiences are so perennial that they feel contemporary. Encountering that Augustine makes this book worth the read.