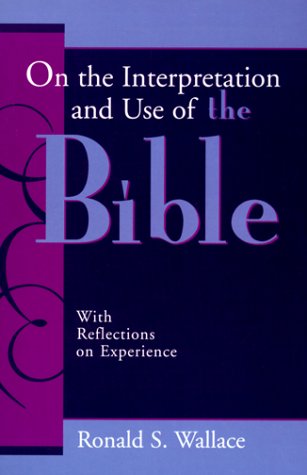 This is an odd book: more pastoral than academic and yet presented as a would-be academic contribution, although as a contribution to what is not entirely clear. It is nevertheless easy to read and thoroughly edifying. Wallace essentially reflects on a long career of reading and teaching the Bible and makes some good and compelling points of a more or less theological nature on how to use it, and occasionally on how to interpret it.

The reader is introduced anecdotally to Wallace’s view of the Bible. He offers three main presuppositions for his study: inspiration (where the Gospels ‘resound’ as if ‘God himself were speaking them’); revelation (God shows us what he is like); and ‘salvation history’ (the Bible is history with a purpose). This last perhaps reveals the book to be a product of its author’s time, as do two later chapters entitled ‘Central Issues in Interpretation’ which treat typology and allegory as the only such issues. Much of the time what Wallace says is balanced and reasonable (allegory can be overdone but has value; typology has a clear NT warrant but again can be stretched), and he frequently chastises his own younger spiritualising excesses. But it is hard to believe that these are really the central issues in interpretation today, and what is of merit in them would, I suspect, be widely taken as read.

Similarly, chapters on ‘Interpreting the Text’ and ‘Applying the Word’ reflect a mildly Barthian Reformed approach and speak wisely and warmly of allowing a vision of God to provide a framework for exegesis. He focuses on the ‘spiritual’ context (the church as a worshipping community) as a more fundamental requirement than the academic one but without down-playing good historical-critical hard work. His reflections on ‘application’ explore how the ten commandments should be read Christologically. In a brief chapter on ‘Openness and Surrender’ he marshals Calvin and Luther to the task of claiming that sheer spiritual stubbornness is a large part of our problem in reading the Bible. All these points are well made and well taken.

For all this the oddness is never far away. Wallace makes the bizarre decision ‘superficially to clutter the book up with references to my sources of information’ in order to ‘give it a possible circulation within the wider academic community’. In fact the footnotes are entirely superficial and frequently leave us none the wiser: names with short titles, no publication details, sometimes just editors or article titles with no reference at all, and in precisely two intriguing cases references to recent works which are averred to have ‘little similarity’ with his own discussion. One thinks of Lesslie Newbigin’s approach here, and suspects that Wallace should have taken the road less footnoted. In the notes we do have, Barth beats the Reformers by a short head, and Von Rad brings up the rear. Again this leaves the reader feeling like a listener to someone else’s problems. Perhaps tellingly, the closing chapter focuses on the need to recover a firm belief in miracles as a key to seeing the Bible as historically reliable. It seems to me unlikely that this is quite where we are at in our credulous age of supermarket spirituality.

I found myself agreeing with Wallace much of the time, but finding myself hard-pressed to imagine a student to whom I could recommend this. As a devotional resource it might fare better, but its semi-academic style will deter casual readers, and irritate academics.