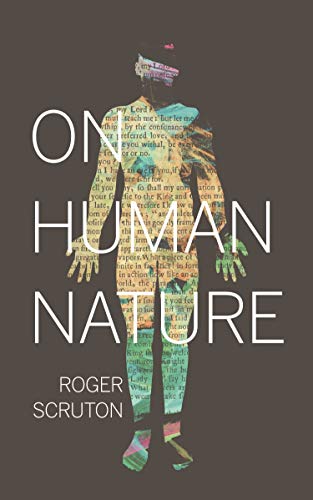 Several recent and insightful visions of human nature have recently been published, to which we can now add Roger Scruton’s On Human Nature. Anthropology is an exciting area of reflection that has been an area of significant interest in philosophical, theological, scientific and psychological explorations. Scruton’s present contribution is similar to Charles Taylor’s Sources of the Self (Cambridge, MA: Harvard University Press, 1992), albeit, closer in length to Thomas Nagel’s The View from Nowhere (Oxford: Oxford University Press, 1989). Specifically, Scruton offers the reader a philosophical anthropology that touches on theological and scientific portraits of the human. Through a blend of Kant and Husserl, Scruton contributes a unique portrait of human nature, which deserves a place in contemporary discussions.

Similar to his natural theology work in The Soul of the World (Princeton: Princeton University Press, 2014), Roger Scruton applies his Kantian mixed Husserlian phenomenology specifically to human nature. For Scruton, the world is understood in two ways, naturally and phenomenally. So it is with humans: humans are bodily and mental, natural beings as well as transcendental beings. Physical life has two aspects to it: that which can be explained according to the natural sciences as mere physical stuff and that which is phenomenologically experienced as with art, sex, and religion. This could be called “cognitive dualism” (i.e., the view that the world has two distinct and irreducible features or sets of properties), which avoids the various extremes in personal ontology. Scruton is quite clear that metaphysical naturalism as a framework is out of bounds for a proper understanding of the human. Humans cannot be reduced to their physical component parts (i.e., reductive physicalism). Something fundamental to human nature is lost in the study of human nature from a merely biological or neuroscientific standpoint (e.g., Richard Dawkins, Daniel Dennett, the Churchlands; see ch. 1).

On the other hand, while humans are biological kinds in that they are embodied beings, they are not purely biological kinds. Rather, humans are embodied beings and beings of a transcendental sort, having features or properties non-reducible to the physical world. This does not amount to any version of substantive dualism or substance dualism. Scruton is clear that any sort of Cartesian substance that is actually distinguishable from concrete bodied existence is inconsistent with one’s origins (see pp. 38–41). Instead, humans are emergent products, and humans include both physical elements and mental elements. Humans are irreducible to a biological kind because they are of a different kind—they are of a personal kind.

The personal nature of human nature establishes the foundation for Scruton’s overarching vision of humanity. In this way, phenomenology, common-sense experience, interpersonal relations, and consciousness provide the way forward for an accurate understanding of the human. The rest of the book is an exposition of this vision, starting in chapter 2.

Personhood, consciousness, and perceptual experience actually contribute something new to the world. Consistent with Kant’s transcendental subject, the person is an autonomous agent that is not so much in the world, but adds a point of view onto the world (p. 57). Scruton’s view is unusual in that the subject is neither an immaterial substance (with Descartes) nor a composite of the immaterial substance in a material substance (with Thomas Aquinas), but a Kantian I know not what. Two features are necessary to paint an adequate picture of Scruton’s human nature. First, the first-person perspective (construed, once again, not as a substance but as a capacity or faculty) as that distinct consciousness that can experience the world as meaningful is an essential property of humans. However, the first-person perspective is not a “pure” immaterial subject, as with Descartes (p. 56), but a subject that emerges necessarily in the context of an I-thou relation (made popular by Martin Buber). This leads to the second point. For Scruton, following Kant, the subject is only known in a second-person context interpersonally with other subjects. The I is inaccessible apart from my relationship to the other. Saying this, his arguments remain unclear as to why this is true. For it seems, that the first-person perspective, rather than an emergent property within an already existing interpersonal environment, logically precedes a second-person encounter. Furthermore, I could conceive of my existing, as a person, on an island with no other humans present. Would I still be me? It seems so. Could I still know that I am me? It seems so. Could I carry on living secluded on the island without others? Surely yes. If so, then it seems that we have reasons for thinking that the I, as a pure mental/immaterial subject, exists. Arguably, I can pick out one unique property or feature in my own conscious states of awareness, which makes me distinct from other persons. If I co-exist with all of my thoughts as I persist through time as the self-same I, then I am a substance that instantiates thoughts, volitions, emotions, and memories about myself. Causally necessary conditions may precede my coming into existence, but these are not essential properties of me; for I could have come into existence in another way. In the end, it seems that Scruton’s I-know-not-what view of human nature lacks an explanatory ground for making sense of the first-person perspective. What he needs is a substance, and a substance similar to that which is found in Descartes’s writings. This does not take away from the transcendental features of the subject, but, in fact, grounds them in a something.

In typical Scruton fashion, the present book is insightful and engagingly written for a varied audience of both scholars and advanced laity. Those interested in the modern and contemporary literature on philosophical anthropology will find the present volume worthy of careful reflection. Along with the pushback given above there are other areas deserving some criticism. For example, one could argue that his moral theory (which is a mixture of natural rights and transcendental contractarian theory) requires some theistic grounding (either in theistic moral particularism or divine command theory). One might also desire additional clarification on various ideas advanced (e.g., his rather abrupt conclusion on the apophatic self toward the end of the book). There are several ideas that remain ambiguous (e.g., the self, the sacred, faith). These thoughts in mind, those interested in philosophical and theological anthropology will find that the present meditation is a worthy contribution to the contemporary literature.