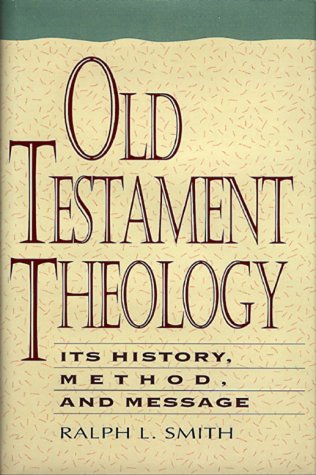 These volumes are exercises in OT theology with some reference to the NT and some broader theological discussion. Smith’s is the more substantial, covers much more ground and may become a significant textbook on the subject, while Farris’s is slighter both in range and treatment.

His claims for his book are modest. It is ‘an elementary introduction’ with no radically new method of dealing with the subject, its aim ‘to provide university and seminary students with a textbook that gives a partial report of what others have said and done about Old Testament theology and then suggests ways the theological materials in the Old Testament may be organized, interpreted, and appropriated’ (p. 15). He fulfils his aim admirably.

A good survey of the subject’s history is followed by a methodological survey, perhaps the key chapter of a book showing a major methodological interest. He recognizes the danger of using systematic theology terms to structure biblical theology, yet sees some systematizing to be inevitable. Then come chapters dealing with selected OT themes, intended as models students can use to build their own OT theology. The topics chosen are the knowledge of God, election, covenant, God’s nature, the nature of mankind, sin and redemption, worship, the good life, and eschatology. He agrees that systematic theology starts with ‘revelation’ while the Bible begins with creation, but if the OT is not revelation we cannot speak of its ‘theology’ at all. Here he glances in the direction of James Barr, the most formidable recent critic of biblical theology, whose criticisms he frequently seeks to take into account. These chapters set out the relevant OT material clearly and fully, engage with the views of other scholars, and wrestle with methodological issues and questions of contemporary relevance, that of OT ethics, for instance.

A useful work, it is sure to be criticized on the grounds that the writer sometimes appears to have the concerns of a systematic theologian in view in handling the material. For instance, his treatments of election and of baptism reveal his own theological stance on these issues. Its value is enhanced by its major bibliography and unusually large series of indexes.

T.V. Farris’s volume is for ‘the busy pastor, overworked student, and inquisitive layperson’. He too makes modest claims, saying it is not a ‘complete, full structured soteriology’ but rather ‘an attempt to evaluate selected Old Testament passages and terminology that represent the core salvation message contained in the “Old Covenant” ’. The character of salvation is directly related to God’s character, so he begins with the ‘vengeance’/mighty to save’ tension in Isaiah 63:1–4. Nearly two-thirds of the passages discussed come from Genesis and Isaiah, but they also come from Exodus, Leviticus, Job, Joshua and Joel. They include key items like Genesis 15:6; Leviticus 17:11 and Isaiah 52/53. He refers to the Psalms and Jeremiah 31 in the final chapter. He maintains ‘that YHWH’s salvation strategy constitutes the central theme of the Old Testament. In fact, I am persuaded that the Lord’s soteriological design is the consolidating principle of both Testaments’. The volume is largely exegetical but there is more NT reference than in Dr Smith’s book and more contemporary application.

The combination of exegesis and application results in an unattractive mixture of writing styles. At one extreme there are strong academic discussions, such as the treatment of the Mosaic covenant material in Exodus, and OT words are given in their Hebrew characters but with English translation. At the other are somewhat homiletical sequences of headings (e.g. the Problem, the Solution, the Application), and some colloquial expressions (‘Sin … may be committed, cussed, or discussed’!). This rather grated on this reviewer but other readers may not be affected in the same way. Incidentally, an index would have been useful.

Both authors write from a conservative perspective, but Smith engages with writers of other outlooks rather more than Farris.