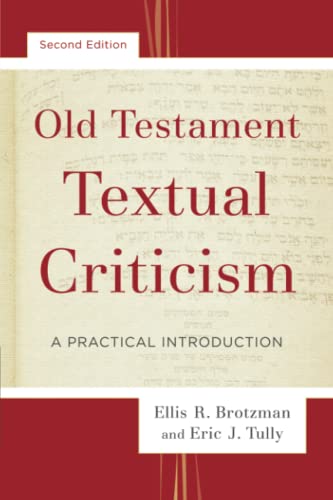 Brotzman provides a survey of the texts of the Hebrew Bible and their evaluation. The work is weakest where it surveys the versions of the Old Testament. There is a dependence upon Waltke and Cross, especially in acceptance of the latter’s hypothesis of three basic types of Hebrew texts. Tov’s analysis of the Qumran manuscripts has demonstrated that this is an oversimplification; a fact to which Brotzman refers but does not incorporate in his analysis of the textual history (pp. 92, 94). The strength of the work lies in its helpful discussions on how to read the BHS (the standard Hebrew text of the Old Testament), on types of scribal errors, and on practical examples of textual criticism at work in the book of Ruth. An English key to the Latin abbreviations of BHS concludes the work. Thus the work forms a practical complement to Tov’s introduction.