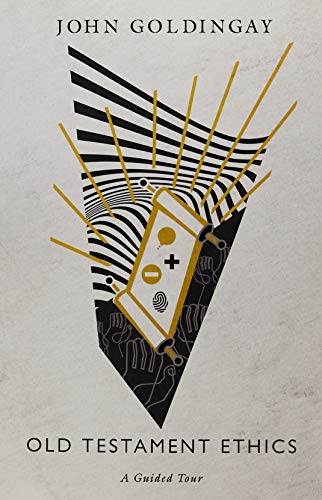 Should Old Testament ethics be anything more than a passing interest for Christians today? Can they, or should they, continue to instruct us? Old Testament scholar John Goldingay addresses these questions in his latest non-academic work. Goldingay puts his prolific pen to what he calls a “guided tour” of Old Testament ethics. This is not, therefore, a typical treatment of the subject. He neither wades into the pedantic weeds of methodology nor systematizes his subjects into traditional categories. Instead, Goldingay takes the reader through dozens of brief reflections on the many ethical angles of the Old Testament.

Goldingay offers forty-three chapters in less than three hundred pages to show how the Old Testament forms an ethical world for its readers. In spite of this brevity, each chapter is peppered with large, block quotes of Scripture followed by Goldingay’s own deliberations that point to contemporary areas of practical relevance. The book is divided into five parts: qualities, aspects of life, relationships, texts, and people. The personal qualities Goldingay examines include godlikeness, compassion, anger, truthfulness, and contentment. The aspects of life that require ethical reasoning include wealth, violence, reparation, sabbath, and work. The section on relationships describes the Old Testament’s vision for how we relate to people, including friends, neighbors, women, “who you can’t have sex with,” parents, migrants, and cities. The section on texts treats various well-known Old Testament passages or books that carry profound ethical implications, including Genesis 1, Leviticus 25, Ruth, and Psalm 72. The final section of the book deals with biblical figures who found themselves in ethically weighty situations and whose performance, good or bad, stands to instruct readers. These figures include Abraham, Joseph, Shiphrah and Puah, Nehemiah, and Queen Esther. Goldingay concludes the book with a postscript that gives his thoughts on the infamous slaughter of the Canaanites.

Goldingay predicts in the preface that some of his conclusions may seem “a bit conservative” while others will seem “a bit liberal” (p. viii). Most of this ambivalence, however, emerges in the tension between what the biblical text affirms over against Goldingay’s own views or those he expects some of his readers to hold. For instance, he begins his chapter on “People Who Can’t Undertake a Regular Marriage” by recounting how he put it to a congregational vote whether his church should host same-sex weddings or not, which is a curious procedure if one is committed to an ethical standard derived from the Bible. He goes on to conclude that the biblical ideal for marriage is “heterosexual” and that “a same-sex marriage thus does fall short of the vision” (p. 142). Similar tensions emerge in the chapters on “Women,” “Who You Can’t Have Sex With,” and the postscript on the Canaanite slaughter.

For years, Goldingay has placed his scholarship in service to the church, and this volume is no different. In his lively, somewhat cheeky style, he makes engagement with Old Testament ethics interesting and fun. This volume will prove helpful for pastors and Bible teachers who need both a quick grasp of their subject and a series of biblical texts for further study. It will prove less helpful for academics and seminarians who require a more comprehensive treatment of the issues, a more transparent look at the exegetical scaffolding for Goldingay’s conclusions, or discussions of methodology.

The leading quality of this book is its relentless use of the biblical text to inform the ethical considerations of its readers. Goldingay genuinely wants his audience to wrestle with the Bible itself instead of what he thinks the Bible says. As he puts it, “All the way through this book, I am wanting my readers to pay more attention to the Old Testament text than to what I write. Reading books about the Bible easily becomes a replacement for reading the Bible” (p. 179). To this end, every chapter brims with Old Testament quotations, allowing the reader to see firsthand why Goldingay’s remarks lean in the directions that they do.

More problematic is Goldingay’s analysis of why some Old Testament standards are shaped as they are. One example comes in Chapter 22, “Who You Can’t Have Sex With.” Explaining the rationale for the biblical criteria, he writes that “all of them have something to do with safeguarding order or structure or stability in the family and community” (p. 136). Such rules “have nothing to do with genetics but with what causes disorder, scandal, division, and disruption in the family and the community” (p. 137). In other instances, these rules derive “from a conviction that the way God created the world had a built-in order about it to which we should adhere” (p. 138). For this reason, animals are clearly meant to have sex with animals and men are clearly meant to have sex with women. On the surface, these remarks are uncontroversial. No one should deny that God’s legislation for Israel and all humanity is concerned with order, stability, and an in-built goodness that promotes our flourishing. However, to say or imply that these reasons exhaust God’s purpose in such laws is surely incomplete. God calls Israel to an obedience that mirrors God’s own character. Thus, he can say, “You shall be holy, for I the Lord your God am holy” (Lev 19:2, cf. Lev 11:44–45). Yahweh’s commands can certainly perform pragmatic functions and give wise, orderly direction for daily life. But the roots of these commands sink deeper than the functional. They originate in the character of God himself, which Goldingay fails to emphasize.

However, Goldingay’s book is marked by an even more problematic claim. It comes first at the beginning when he tells the reader that the Old Testament laws were not always meant to be read and obeyed literally. He writes, “Even faithful, Torah-keeping leaders don’t treat the Torah as a statute book. They know they are not supposed to be literalistic in interpreting these ‘laws’” (p. 5). This assertion shows up at various other places in the book (e.g., pp. 84, 89, 93, 135). Needless to say, this approach to Scripture will be quite alarming for readers who are convinced that the Old Testament laws were intended to be obeyed literally. For example, the case of the man who was executed for gathering sticks on the Sabbath would seem to militate against Goldingay’s construal (Num 15:32–36). Moreover, “that one can find little match between the prescriptions the Torah lays down and the way Israel actually handles offenses such as murder, idolatry, and adultery” (p. 5), is more likely proof of Israel’s disobedience than of anything else. Goldingay’s claim, therefore, requires far greater substantiation, with replies to expected objections, before readers can be expected to accept its validity.

In spite of these problem areas, Goldingay regularly stimulates the reader with his insights and applications. Although not a “must read” in the field, I recommend his book as a supplement or starter to one’s study of Old Testament ethics.