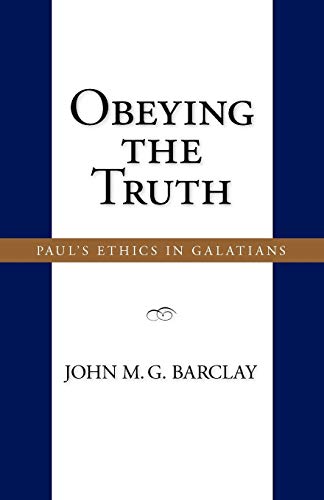 Obeying the Truth: A Study of Paul’s Ethics in Galatians

This clear and detailed study, a revision of a Cambridge doctoral dissertation (supervised by Prof. Morna Hooker, and successfully defended in 1986), amply repays close reading. Barclay’s primary focus is Galatians 5:13–6:10, which, he says, is something of an embarrassment to much traditional exegesis. On the face of it, Paul seems to be going back on his earlier insistence that Christians are free from the law. The perceived difficulty has bred numerous proposals: this section is a later interpolation (O’Neill), or, more commonly, an apologetic appendix designed to ward off antinomianism wrongly derived from the first part of the letter (Burton and many others). Other ‘solutions’ are ably canvassed and dismissed.

Precisely how is this paraenetic section related to the earlier debate in the epistle over law and faith? Is it related to the concrete challenges of the Galatian churches, or is it a universal moral code? If the former, whom is Paul addressing, and what problems does he have in view? Is Paul’s principal purpose polemic, appeal, defence, explanation? These questions set the agenda for Barclay’s study. He contends that the only satisfactory answer involves gaining a clear understanding of the crisis the churches were facing in Galatia, grasping Paul’s response to this crisis, and focusing particular attention on the ethical section.

Along the way, Barclay wrestles with the problem of ‘mirror-reading’, that is, the recreation of a complex situation when we have access to the records of only one party in that situation. It is desperately easy to conjure up a situation that never existed, whether by selectively handling the evidence or by ‘over-interpretation’, reading far too much into some bit of relatively innocuous text. To gain control in the necessary task of historical reconstruction, Barclay advocates close monitoring of the tone of Paul’s remarks, their frequency, their clarity (since it is poor method that builds too much on ambiguous expressions) and their unfamiliarity (since an unfamiliar topic or response may reveal the existence of a local problem of special importance).

The study therefore develops into a full-scale examination of the epistle to the Galatians, not least its theological emphases and what can be deduced about the historical setting that calls them forth. The opponents (Barclay refers to them as ‘the agitators’ rather than the more traditional ‘Judaizers’, for the sufficient linguistic reason that the Greek verb ‘to judaize’ refers to Gentiles who adopt Jewish ways, rather than to Jews who compel Gentiles to adopt Jewish ways), and the Galatian churches are also treated to a sociological approach to conflict: at issue are questions of the converts’ ‘behavioural patterns’ and self-identity. Barclay argues for a situation in which the new converts have become isolated from their erstwhile pagan friends, without yet constituting a new, stable, social group. The ‘agitators’ are therefore encouraging them to establish their identity and secure a stable basis for their ethical behaviour by becoming full members of the synagogue, a step that requires that they submit to circumcision, even though they maintain their allegiance to Christ. One of the dominant reasons why this seduction seems so attractive is that they have not discovered an unambiguously articulated moral structure within the life of the Spirit that Paul has advocated. Thus Paul is opposing the view that if pagans convert to Christ they can find a supportive, identity-conferring fellowship and a coherent ethic only within Judaism.

Barclay contends that Galatians 5:13–6:10 is easily seen to develop out of Paul’s earlier argument, once we understand that a major component of the Galatian crisis had to do with how a member of Christ’s people should live. In particular, the emphasis in these verses on examining oneself and avoiding conflict within the Christian community is tied to the divisions the agitators had largely provoked. In Barclay’s view, Paul is not in this epistle vacillating between addressing one group and then another: he has but one purpose throughout, viz. the status and obedience of Galatian believers, not fears about libertinism. Paul is not attempting to lay out the rudiments of Christian ethics, nor is he combating antinomianism. Rather, he is restating his own view: Christians should live lives led by the Spirit, confident that the Spirit provides sufficient moral guidance. The alternative is the moral danger of living in or according to ‘the flesh’, which Barclay sees not as the weak or sinful side of human nature, but simply as that which is ‘merely human’.

Thus, in broad terms Barclay joins hands with E.P. Sanders and F. Watson in opposing the traditional Lutheran interpretation that ties justification by faith to opposition against justification by meritorious works, all within a framework of extreme individualism. Paul’s concern is not with the individual, but with the status and identity of the Christian community; if he opposes law, it is not because observance of law generates self-righteousness but because he is opposed to the view that observance of the Mosaic law is a requirement to enter the Christian community.

There are many attractive features to this dissertation, not least the clarity with which it is written, the generally comprehensive bibliography (though I noted several surprising omissions), the rigorous and generally convincing exegesis of many of the individual parts of the paraenetic section (5:13–6:10), and his attempt to think through the problems of mirror-reading. Scarcely less useful is his vigorous criticism of Betz, and his self-distancing from Sanders and from Watson at a couple of points. Sanders depends on a major distinction between ‘getting in’ and ‘staying in’; Barclay doubts that the distinction is wise or helpful. Watson uses social theory to discount the importance of ideology; Barclay sees a continuing dialectic between ideas and social conditions. But in any case the theological problem, Barclay insists, is not legalism, understood as earning merit before God, but cultural imperialism, that is, insistence on observing the Jewish law and customs as necessary tokens of membership in the people of God.

But there are several places where it is less than clear that Barclay has it right, especially in his analysis of Paul’s theological argumentation. Although it is clear that the self-identity of the Galatian Christians is an important dimension of the problem, the question of self-identity, however prompted by a sense of social isolation, could not be divorced from the theological question of the relation between the gospel Paul was preaching and the law of Moses. Otherwise, why should Paul care if his converts identify themselves with the synagogue? The reason, in part (as Barclay points out), is salvation-historical: Paul sees a new covenant in place, a fresh divine act of self-disclosure in the coming of Jesus. But that means Paul must deal with the theological connections with the antecedent revelation that all sides of the debate viewed as authoritative.

At this point, Barclay’s treatment of the gospel as the ‘fulfilment’ of the law is so thin that he becomes painfully unsympathetic to Paul. Paul displays ‘considerable ingenuity’ in his handling of OT texts; some of his work is a ‘ “tour de force”, accompanied by strange and even arbitrary exegesis’. We are ‘entitled to ask … whether Paul’s arguments constitute an effective response to the Galatian crisis’, comprising, as it does, ‘subtle linguistic tricks’ that probably ‘merely baffled the Galatians’, some of his re-definitions possibly being ‘even harder for the Galatians to comprehend than they are for us’. Of course, we cannot be certain what they thought of his ‘somewhat strained exegesis of his key verses’; perhaps they were ‘simply bemused by his impressive exegetical dexterity’. In each case (not least Barclay’s treatment of the notoriously difficult passage 3:10–14) there are deeper and more penetrating ways of understanding what Paul is doing. Barclay has got himself into the position where he has tried so hard to be sympathetic to Paul’s opponents that he incessantly betrays his lack of sympathy for the apostle; and part of this lack of sympathy, it appears, is because he has not grasped his argument.

I am less convinced by Sanders’ analysis of Judaism than Barclay is. Elsewhere I have argued that although Sanders has rightly debunked the use of fifth-century sources for establishing the weighing of merits, and rightly criticized the (especially) Lutheran and reductionistic contrast between a Judaism of (legalistic) works and a Christianity of faith, nevertheless his handling of Jewish sources introduces a new reductionism. When true religion is tied in its essence to human response to God’s law seen as demand, to law understood in no small part as divine lex, the world-view is vastly different from one in which the law is seen as a salvation-historical anticipation of God’s redemption wrought on our behalf through the death and resurrection of another. Nor does Sanders attempt to plot the changing attitudes to law diachronically: it is arguable, for instance, that while Strack-Billerbeck rely too heavily on fifth-century sources, Sanders does not attempt to plot out where the first-century Jew is in the line of development that runs from the last of the OT books to the fifth century. Barclay (and others) are right to trace the sociological strains in the Galatian Christians, and to insist on the priority of the larger question, viz. the relation between the (unconverted) Jewish community and the church. But those questions were tied not only to Christology but to the place of law in the history of redemption. Paul (and other NT writers) insist that what we call the OT cannot be rightly understood when it is read a-temporally, with Torah the hermeneutical key; it can be rightly grasped only when the ‘befores’ and ‘afters’, the prophecies and the fulfilments, the types and the antitypes, are spread out along the axis of history, with due place given to the apocalyptic structure that controls so much of his thought. These factors shape Paul’s handling of law and grace not less than the pressing urgency to give his converts a sense of self-identity. That means that Paul is not simply establishing that Christianity is different from Judaism, and that the Messiah has come, but that the (unconverted) Jews have not rightly understood their own law.

In passage after passage in the earlier parts of Galatians, Barclay’s exegesis is less than convincing, a reflection of the new reductionism that controls so much of contemporary Pauline studies. Indeed, when Barclay cites Ephesians 2:8–9; 2 Timothy 1:9; Titus 3:4–7 as evidence for how quickly Paul’s gospel (as Barclay reconstructs it) was transmuted into a gospel that is defined as ‘grace through faith’ that is ‘not from works lest any man should boast’, for some of us these same passages constitute some evidence that Barclay has not quite understood Paul in the first place.

D. A. Carson is emeritus professor of New Testament at Trinity Evangelical Divinity School in Deerfield, Illinois, and cofounder and theologian-at-large of The Gospel Coalition.