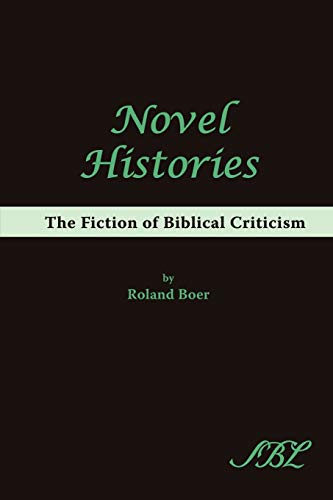 Novel Histories: the Fiction of Biblical Criticism (Playing the Texts, 2)

This is not a simple book to categorise, as the author acknowledges. Boer himself calls it a work of metacommentary, that is, something which is ‘beyond’ commentary and which reflects on the work of biblical interpretation. His special concern is to locate trends in biblical study against the background of other movements in cultural and literary criticism, whether or not biblical critics are aware of this broader perspective. The discussion is influenced by two particular cultural and philosophical trends. Firstly, this is an exercise in postmodern biblical criticism, and though Boer is not an uncritical advocate of postmodernism, that is clearly where his sympathies lie. This involves for him partly a disaffection with all forms of historically oriented criticism and partly a fondness for a freer, ‘more playful’ approach to biblical interpretation. Secondly, and perhaps a little surprisingly in the 1990s, his underlying methodology is derived from Marxism. This leads to a frequent use of dialectical techniques and to the inclusion of political economics as an important component in the processes of biblical interpretation. The interplay of these various movements merely forms the backcloth to Boer’s main argument, which is worked out at three interrelated levels. At the basic level, Boer engages in a reading of Martin Noth’s seminal work The Deuteronomistic History, which in his view has marked similarities with the historical novel. Both Noth’s work and the historical novel are regarded as constructs involving a combination of fact and fiction. The second ‘I level relates the former discussion to wider cultural perspectives, especially realism and modernism. The assumptions underlying The Deuteronomistic History and the historical novel are realist, in seeking to provide direct access to reality, and also modernist, in their need to probe beyond the surface of their sources. The third level forms a counterpoint with the other two and takes the form of a short novel. Its characters are drawn from the rest of the book, and include such varied individuals as the biblical scholars Martin Noth and Keith Whitelam, the novelist Sir Walter Scott, and the Marxist literary critics Georg Lukacs and Frederic Jameson.

This description makes the book sound complex, and in truth it is not always easy to keep track of the overall argument. In particular, this reviewer found the interwoven novel something of a distraction, though as it functions as ironic illustration rather than an essential part of the argument, the problem is not too serious. The heart of the book focuses on the relationship between realism, modernism and postmodernism. In Boer’s view, modernism remains the dominant cultural movement in biblical studies, including much that is usually regarded as postmodern. Conservative biblical criticism, which is mentioned only in passing, is by contrast often predominantly realist, though it can involve a mixture of realism and modernism. Boer’s own reference is for a postmodern biblical criticism marked not by a demand for new methods, which is a feature of modernism, but by a market place of ideas jostling uncomfortably alongside each other.

The result is an interesting pot-pourri which puts some familiar trends in biblical studies into perspective. The implications of relying on the theory of a Deuteronomic History as an explanation of a major chunk of biblical history are especially salutary. But the alternative proposed here is no more appealing. This is partly because Boer’s postmodernism can only promise a future utopia so vague that it cannot yet even be described. But it is also because he finds no place for a reality which combines the supernatural and the historical. While the book is certainly of value, it is unlikely to satisfy those who have become convinced that God was and is active in the real world.