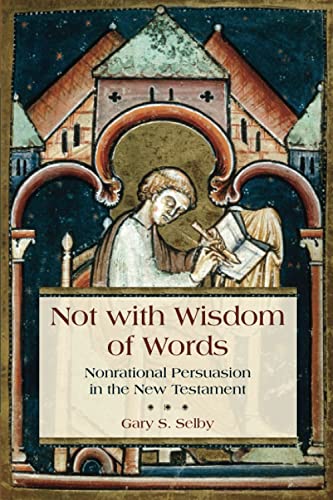 Not with Wisdom of Words: Nonrational Persuasion in the New Testament

Is propositional truth, offered in unadorned simplicity, enough to secure acquiescence to its claims and instruction? Is appeal to the rational mind enough to persuade an audience of your desires for them? In his book Not with Wisdom of Words: Nonrational Persuasion the New Testament, Gary S. Selby, currently the professor of ministerial formation at Emmanuel Christian Seminary, sweeps the reader into the ancient world of rhetoric and poetics to show how Paul appealed not only to the intellectual capacities of his audience but also to their capacity to visualize and experientially inhabit the truths he articulated.

Selby argues in this work that the NT authors, particularly Paul, used elements from the tradition of ancient poetics to create “vivid, transcendent, ‘extrarational’ experiences that would provide for their hearers a momentary, phenomenological apprehension of theological reality” (p. 16). They did this for a couple of reasons. First, the faith of the earliest Christians was never produced by a set of logical arguments alone. Instead, faith was understood “as a vivid, extrarational and life-altering encounter with God, accompanied by the experience of amazement, literally, ecstasy” (p. 37). To continually nourish such a faith, therefore, would require more than a steady diet of logically airtight argumentation. It would require a periodic feast upon the riches of religious experience, prepared and served by the powers of imaginative, poetic language. Second, the obstacles and challenges that emerged in the earliest Christian communities required more than logical argumentation to surmount. In many instances, these communities needed to be able to envision “what they longed for but had not yet come to pass” (p. 17).

Selby believes that the “rhetorico-poetic” tradition from which Paul borrowed is best represented by ancient thinkers such as Gorgias, Longinus, and Aristotle. In chapter 1, he takes representative works from these authors and highlights the two key elements of this form. These elements were known as mimesis (representation) and phantasia (visualization). Mimesis sought to place the audience “in a position where they imaginatively experience states of consciousness that normally would only be experienced by other, natural means” (p. 27). Phantasia involved “the capacity for visualizing and emotionally responding to objects, people, and events not literally in the field of vision” (p. 32). In order to be maximally persuasive, a speaker or author would use the mimetic power of language to activate their audience’s capacity for phantasia, thereby creating an immersive, subjective experience of their content that invited a much warmer reception of its ideas.

In the next four chapters, Selby applies this method to four Pauline passages, devoting one chapter to each: 1 Thessalonians 4:13–18 (ch. 2), Romans 7:14–25 (ch. 3), 1 Corinthians 13 (ch. 4), and Ephesians 1:3–14 (ch. 5). Each chapter first explores the situation that likely called forth the respective letters. Then, Selby situates the poetic text within the letter itself before exegeting the passage and analyzing its rhetorico-poetic effects. The final two chapters seek to draw out the implications of this poetic form, exploring how its use enabled the NT authors to alter the three central relationships in the typical rhetorical encounter: the relationship of the rhetor to the audience, the relationship of the audience members to each other, and the relationship of the audience to the content itself.

Selby’s work offers a fascinating glimpse into the methods of communication used by Paul. For this aspect alone, it is worth a careful reading by scholars and pastors alike. It is unclear, however, if the rhetorico-poetic tradition identified here finds usage in other genres of the NT besides the letters. Even though the title of the book implies that it does, Selby only examines the epistles, and even here, only Paul’s (debates on the authorship of Ephesians notwithstanding). Additionally, Selby does not offer a concrete methodology for identifying when an author is borrowing from the rhetorico-poetic tradition to achieve extrarational experiences. His exegesis directs the reader to grammatical and syntactical clues that point to the use of poetics, but some of these change from example to example and at no point is a framework for consistent identification offered. These minor criticisms, however, do not neutralize the main argument of this book. This work’s key contribution is to elucidate how a NT author like Paul used the power of mimetic language “to create imaginative representations of the ideas they sought to advance” (p. 127), which effectively served to place his hearers “in the content” of his discourse (p. 128). Once those hearers were “in” the content, Paul could alter the way they experienced God, each other, and the world.

Naturally, this way of using language holds particular promise for preachers who are heavily invested in altering the way their hearers experience God, each other, and the world each week. Although this book was not necessarily written with pastors in mind, the persuasive tools it describes can help them take their audiences into emotionally powerful experiences of divine truth that can form and stabilize their Christian worldview in ways that abstract propositional truths alone cannot. The rhetorical powers of mimesis and phantasia go beyond the need to simply illustrate a point with a memorable image or story. They take discourse to a new level of persuasion whereby the audience is led to feel and inhabit the theological realities proclaimed from the pulpit. For the insight that this book contributes to a more robust model of biblical communication, it is cheerfully recommended.