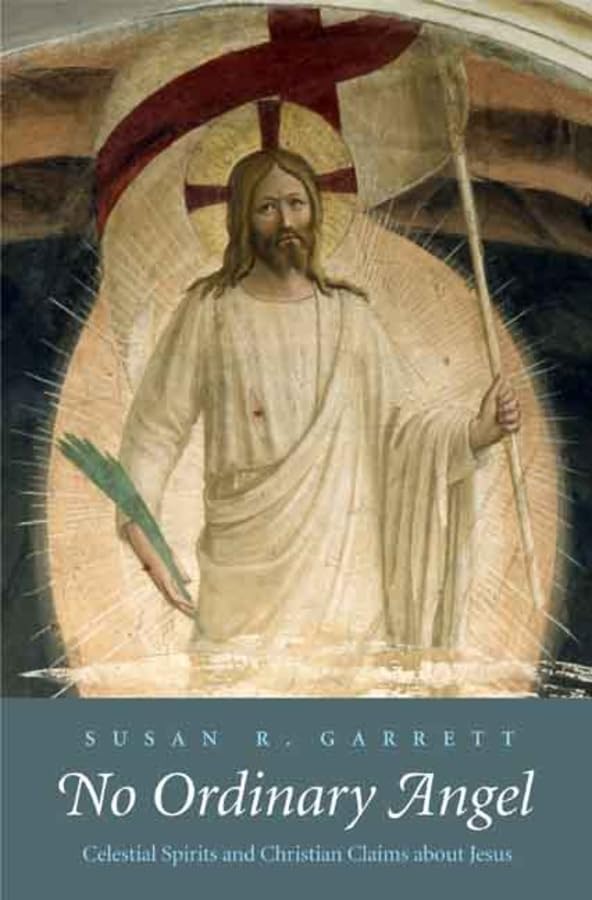 No Ordinary Angel: Celestial Spirits and Christian Claims about Jesus

British wonky pop artist Dan Black teamed up with American rapper Kid Cudi in 2010 to remix an earlier song of Black’s entitled, “Symphonies.” The sound and beat are certainly fresh and slick, but the lyrics tend toward brilliance and embody a generation’s yearning for something beyond the digitization of life and the technological tyranny of the visual. Black sings in the chorus:

And Cudi concludes the first half of the final verse:

Despite the rage of certainties in all directions, there is a persistence of wonder with respect to what we can’t quite quantify or see. “Is there another place, another dimension to life?” (p. 1). This supra-mundane questioning remains as pressing as ever. Entertainment and economies beguile a stubborn staying quality of the spiritual. We are witnessing in the “space of just a few decades . . . the reenchantment of the world” (p. 2).

Susan R. Garrett analyzes angels as a point of entry into this wider phenomenon. Though angels tend to be supporting players and bit characters in Scripture, attention to them offers a “fresh perspective on the larger story and its more central players” (p. 237). Moreover, guided by ethnographics, she peers into “our culture’s governing assumptions about angels, by delving into the world of biblical angels and the ancient authors who wrote about them” (p. 5). In other words, her study of angels is a cipher for how cultures past and present view the world and configure our place within it. “The ways people talk about angels reflect common motifs in popular spirituality” (p. 5).

Garrett does not allow her project to be sidetracked by mere questions of existence. After all, what in the world (!) would count as evidence for angelic existence? Whether articulated in the mythic past, the environs of modernism, or contemporary New Age spirituality, “different presuppositions about the world produce different types of angel experiences” (p. 4). The book, then, is not so much about existence, but about meaning, how the celestial is employed in the service of meaning.

The book is divided up into six chapters with an introduction and conclusion that situate and summarize the book’s findings. Each chapter begins by highlighting an issue or question that underlies current expressions about spirituality or angels, then turns toward the biblical material that address similar questions, and concludes with an “angelmorphic” reflection on Jesus and his work and the community’s participation within that work. “Some of the most exciting recent discoveries in the study of ancient beliefs about angels pertain to the figure of Jesus. Immediately after Jesus’ death his followers mined biblical and other textual traditions for imagery and language that could explain Jesus’ identity and the nature of his reconciling work” (p. 11). Christology influenced by such traditions is “angelmorphic Christology.” The early followers of Jesus explicated his identity within angelic traditions. Jesus, however, was No Ordinary Angel. The communal dimension is concerned with the authenticity of messaging. “Angelic communities emerge wherever and whenever love and mutual care, rather than enmity and egoism, govern the way the members of a body of people relate to one another” (p. 229).

The first chapter examines accounts of healing and seeing reality rightly; the second chapter with angels of the throne room and how we can enter the presence of the Most High. Chapter 3 looks at the complexity of desire and fallen angels and how Jesus leads a revolutionary modeling of right desire. Readers will find her work on the notorious “giants” of Gen 6 most intriguing. Chapter 4 deals with Satan, powers, and principalities. Chapter 5 works through the question of guardian angels and gives a helpful history of the doctrine. Chapter 6 is about death and the angelic escorting of the dead.

The brilliance of Garrett’s work is that it performs several tasks at once: it performs careful analysis of both the classical world of the text and the contemporary expressions of our cultural context. Moreover, Garrett is both exegetically and theologically able, which allows her to play the role of cultural critic with an irenic and ironic spirit.

One does wish, however, that in chapter 4 the all too easy target of Left Behind would have been, well, left behind! The notion of the demonic and their influence in the world strike me as slightly more apt given their presence in mainline Hollywood films and how exorcisms were a central aspect of the earthly ministry of Jesus. But it is hard to find too many faults in this brilliant book. It is beautifully written, skillfully conceived, and widely researched—with citations ranging from primary classical texts, scholarly tomes on this or that point of exegesis, new age novels and memoirs, and even references to Wikipedia (pp. 296n61, 299n88)! I strongly recommend No Ordinary Angel.