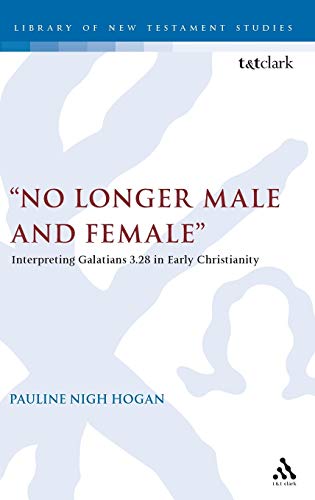 “No Longer Male and Female”: Interpreting Galatians 3:28 in Early Christianity

In this published version of her doctoral thesis accepted by McMaster University, Pauline Nigh Hogan brings together three current trends in New Testament studies: interest in early Christian identity, questions about the role of women in nascent Christianity, and the history of interpretation of a particular biblical text. An unnumbered introductory chapter treats customary matters such as the purpose and limits for the study. Although the subtitle indicates that her study focuses solely on the interpretive history of Gal 3:28, Hogan uses this text as a springboard to investigate a second concern, namely, attitudes toward the roles of women in the church by the writers using this text. She limits her study to pre-Augustinian interpreters arguing that Augustine’s reading of the text solidified its interpretation for the church in the West. She seeks to uncover readings of this text in the time before such consolidation took place.

Five subsequent chapters investigate the use of the focal text within selected periods (roughly defined) of time. First, Hogan looks at modern interpretations of Gal 3:28 itself as well as echoes of the egalitarian-sounding nature of the text in 1 Corinthians, Romans, and Philemon. Secondly, she turns to interpretations of the verse in post-Pauline writings from the late first to early third centuries. Here she includes Colossians, 1 Timothy, and a variety of additional works such as the Acts of Paul, the Gospel of Thomas, and the Gospel of Philip. Hogan acknowledges she has little material to work within these texts since they do not explicitly quote the Galatians passage. She is therefore forced to read passages that reveal attitudes toward women’s role in the church as possible reflections on Gal 3:28. Chapter three looks at the overt usage of the focal text in Clement of Alexandria and Origen in the third century. Chapter four examines the varied employment of this text in the fourth century Cappadocian fathers: Basil, Gregory of Nyssa, and Gregory of Nazianzus. Hogan’s fifth chapter analyzes the use of the text in the late fourth century after Christianity has become the official religion of the empire. Ambrose, Eusebius, and Epiphanus serve as the primary sources for study in this chapter. A concluding section accurately reviews and summarizes the study as a whole. The book includes a list of abbreviations, a bibliography, and an index of ancient authors, ancient writings, and subjects.

Unsurprisingly, Hogan finds that readings of this verse vary considerably according to the interpreter’s context and concerns. As a result, she concludes that there is no singular interpretation given to the phrase “there is no longer male and female,” nor can one discover any clear line of development within early exegesis of this verse.

Hogan does, however, identify a broad commonality among these early interpreters involving some sort of concern for Christian perfection characterized by a resolution of former differences into Christian unity. Again, what these interpreters understand by Christian perfection and what differences need to be overcome varies according to the individual author’s context and interest. Thus, for some it means both men and women have equal access to virtue as a means to spiritual perfection. For those locating the spiritual ideal in celibacy, perfection was attained when a believer, either male or female, ceased from sexual intercourse. For others perfection could involve equal right to prophesy. Thus, in spite of the varied details, a common concern for Christian perfection pervades interpretations of this phrase during the pre-Augustinian time period.

The book’s twofold purpose, to review interpretations of Gal 3:28 in the early church and to examine attitudes towards women held by writers who use the text, at times makes the flow of argumentation a servant of two masters. For example, Hogan is well aware that explicit evidence for the use of the Galatians text in the writings covered in chapter two are few. She is therefore forced to speculate on the text’s use on the basis of comments about women’s roles in the church found in these writings. But the stated direction of argument should run the other way, from use of Gal 3:28 to its influence on attitudes towards women. In this and other places, one is left wondering if the search for attitudes towards women in the early church, itself a worthy subject of investigation, actually drives the study. Thus, the book’s subtitle is partially misleading.

Furthermore, chapter one sits somewhat awkwardly with the rest of the argument. If the study investigates the variety of interpretations of Gal 3:28 within the early church, why include a chapter at the beginning of the work that reviews (selectively) its interpretation by modern critical scholars? If Hogan’s study indicates, as one expects it would, that ancient readers produced interpretations shaped in decisive ways by their own context and concerns, why should the same not be true of modern academic interpreters? Is there a presumption here that modern scholars working in their post-Enlightenment, western environment have produced interpretations superior to ancient ones? I do not detect any overt criticism on Hogan’s part of early Christian readings, though she does seem to measure ancient readings on the basis of modern ones in subtle ways. For example, summarizing her analysis of Tertullian, she writes, “Baptism apparently does not create egalitarian relationships within the Christian community in this world” (p. 120). The assumption here is that Tertullian’s interpretation of the verse must be measured against modern, egalitarian ones.

Nevertheless, Hogan has done the church and the academy a great service by successfully collecting and analyzing statements from a wide variety of sources concerning Gal 3:28 and attitudes toward women’s role in the church during the pre-Augustinian era. The interpretations she catalogs, produced in a cultural context that differs greatly from our own, makes for fascinating reading as well as offering an opportunity for substantive reflection on the influence of context on the process and product of biblical interpretation.

Given the exorbitant prices charged by the publisher for volumes in this series, all but independently wealthy individual scholars are prevented from owning this book. Institutions, however, will want this volume in their library collections. We may hope that Hogan will now turn her critical eye toward the use of other Pauline passages among the early Christians.