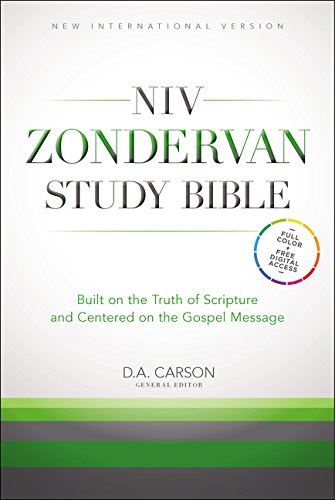 The English language has an embarrassing wealth of study Bibles. As I hold the recently-released 2015 NIV Zondervan Study Bible in my hands, the first question is: Why? Why another study Bible? In answering this question, we find not only justification for another study Bible—but particular recognition for the unique contributions of this fine work.

As most readers of Themelios are aware, virtually all modern Bible translations are constantly being updated. The NLT and ESV, for example, have been incorporating a host of committee-vetted changes every decade or so.

After the release of the full version (OT and NT) of the NIV in 1978, the translation gradually acquired dominance in the evangelical world. The 1984 update gained near Textus Receptus status in some circles. (And thus Zondervan provoked significant ire when the 1984 NIV translation recently went out of print!) The NIV Study Bible (1985, with subsequent revisions) also came to command a prominent, if not preeminent, place on the shelves of serious evangelical students, pastors, and scholars.

With the 2011 major revision of the NIV, the notes from the older NIV study Bible no longer sufficiently matched the text. Indeed, the text revision alone justifies a new study Bible (not a revision) based on the updated NIV text. While some voices have censured the 2011 NIV for its “gender neutral” translation method, additional dialogue has muted much criticism. As Dave Brunn has shown in One Bible, Many Versions (Downers Grove: InterVarsity, 2013), the supposedly erroneous translation techniques which were utilized by the NIV translators (e.g., rendering singular Greek forms as plural English forms) can be found in every major translation, and the actual practices of formal-equivalent Bible translation committees (e.g., NASB) are often broader than their publicized standards. Evangelicals will disagree on the right blend of functional and formal equivalence in a translation, but let us agree to be charitable and humble in that disagreement.

Other justifications for a new study Bible include the need to answer new questions, to provide a platform for the current teachers whom God has raised up for his church, and to make the best use of the most recent technology. We will now briefly consider these three contributions of the NIV Zondervan Study Bible in succession.

First, new questions about the Bible and its teachings are constantly swirling in academia, the church, and the broader culture. In its study notes, articles, and book introductions, the NIV Zondervan Study Bible evinces such an attentiveness to current biblical scholarship and societal trends. For example, the note on Gal 2:16 has an accessible explanation of the pistis christou (Greek for “faith[fulness] of/in Christ”) debate. Similarly, the article on a “Biblical-Theological Overview of the Bible” begins by helpfully distinguishing the three current “faces” of biblical theology.

Second, the new study Bible provides an instructional platform for the gifted Bible teachers whom God has raised up for this generation (Eph 4:11). Certainly, at our local congregations, none of us want to sit in pews and watch videos of sermons from the 1960s. Likewise, in our study Bibles, we want to be instructed and challenged by those gifted individuals whom God has raised up in our day. The list of contributors to the NIV Zondervan Study Bible is an impressive, gold-standard list of respected evangelical scholars. I note as well the wise and careful inclusion of some scholars whose broader institutions or denominations might have been initially critical of the 2011 revision. Clearly the editors sought to represent accurately the broad swathe of committed, orthodox, evangelical biblical scholarship. D. A. Carson is the General Editor and his name is prominently displayed on both the Bible and in various marketing materials. In emphasizing Carson’s name so prominently, Zondervan is in essence holding up a flashing neon sign that says, “In this study Bible, we are committed to having the best of reverent, evangelical, redemptive-historical reflection.” Carson is also known for being generally Reformed in his theology, but non-Reformed scholars also are contributors to the work (e.g., John Oswalt of Asbury Theological Seminary).

Third, when the original NIV Study Bible came out in 1985, the Internet was, except to military specialists or Al Gore, unknown. Technological advances now allow for greater access and functionality in a study Bible. Each print edition of the NIV Zondervan Study Bible comes with an access code that allows for free digital access of the entire work in Olive Tree or The Bible Gateway. I, a non-technophile, found accessing the digital materials easy—and anticipate the benefit of being able to view the study Bible on my phone or iPad via the Olive Tree Bible Study App. (The study Bible is also available for additional purchase from Logos Bible Software.) I also see the potential of adapting photos, maps, and other figures into classroom or church presentations.

Some readers of this review are likely thinking, “I already own the ESV Study Bible and the HCSB Study Bible. Why do I need another study Bible?” Of course, one could equally ask, “I’ve got Douglas Moo’s commentary on Romans. Why do I need Thomas Schreiner’s?” While there are several other excellent study Bibles available, the quality of the contributors to the NIV Zondervan Study Bible alone warrants its addition to your shelf. Also, the new study Bible intentionally draws from a broad spectrum of evangelical scholars, and it is often helpful to read believing, reverent scholarship outside of one’s particular ecclesiological or theological community.

In preparing this review, I read portions from various randomly-selected sections of the Bible—study notes, book introductions, and articles. I found the materials to be consistently well-written, informative, based on good scholarship, and faithful to the biblical text. Illustrations, charts, photos, and maps were both accurate and aesthetically pleasing. Without reservation, I give my enthusiastic endorsement to the 2015 NIV Zondervan Study Bible.