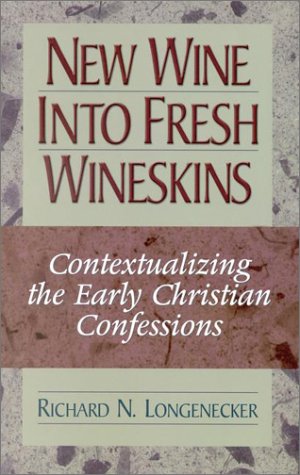 This volume is a fine introduction to the scope and the importance of the early Christian confessions found in the NT and to their significance for today. In the first section (5–44), entitled ‘In the Beginning was the Confession’, Longenecker sets out the criteria for identifying these early Christian confessions and surveys their content. He contends that several such confessions, whether in whole or in part, were incorporated by the NT authors into their writing, that form-critical analysis can identify many of these confessional portions and that the study of such materials shows the central features of authentic Christian thought and practice.

The second part, ‘The Contextualisation of the Confessions in the New Testament’ (45–131) suggests that by observing how the NT authors used these confessions in addressing the various issues of their day, we can understand how the gospel was contextualised in early Christianity and can gain insight for contextualising the same gospel today. Yet unfortunately we only know of these confessions through the NT. Therefore it is a delicate undertaking to discover how its authors employed them. There is the danger of circular reasoning!

The third part, ‘The Contextualisation of the Confessions Today’ (132–76), outlines a philosophy and programme for contextualising the gospel today. According to Longenecker, such valid contextualisation has to be rooted in the confessions found in the NT and has to be guided by the contextualisations of these materials by the NT authors themselves. In addition it has to be aware of and sensitive to differences between various regions, cultures, subcultures and the world-views of our contemporary world. Such attempts need to be ‘true to both the “new wine” of the gospel and the “fresh wineskins” of the day’ (176).

This is a well-argued and presented book. It should be of interest not only to those interested in the NT, its origin and content, but also to those interested in cross-cultural mission and in communicating the gospel in their own context. Its weakness lies in the first part, with its assumptions about the extent of the presence of early Christian confessions on its pages and about their use made.

While scholars agree that some texts most likely are or reflect texts used in early Christian worship or similar ‘confessional’ contexts, not all students of the NT would agree with the considerable size of Longenecker’s selection. The NT authors certainly need to be seen and appreciated in close connection with the early Christian communities of which they are a part and which they address.

They certainly provide ample evidence of argumentative and literary skills in addressing their audiences (‘Paul used early confessional materials in his letters as a basis for his arguments and to structure his presentations’, p. ix). But other scholars would conclude that the NT writers were less dependent on already existing and fixed ‘confessional’ material, but rather dependent on common tradition shared by all Christians (some of which was later summarised and shaped into confessional statements) and, in addition, themselves creative authors and inspired proponents of confessional material. Those emphasising such confessions run the risk of reading too much of the development of later centuries into early Christianity. In addition, one might ask whether not every book of the NT is a particular contextualisation of the gospel—whether or not it cites confessional material.

However, despite this criticism, the texts that Longenecker adduces no doubt indicate vital concerns and basic convictions which the early believers shared. It is therefore instructive to discover when and why they appear in certain contexts and what may be learnt from this for their re-application in today’s world and to today’s needs and questions. One wholeheartedly agrees with Longenecker that such contextualisation has to be ‘The faithful, responsible and relevant application of the gospel in differing cultural, societal and ideological situations’ (3). For this endeavour of bridging the gap between early Christianity and the concerns of contemporary Christianity Longenecker provides a useful, stimulating and much needed guide to demonstrating afresh the relevance of what was said then and there for the here and now.