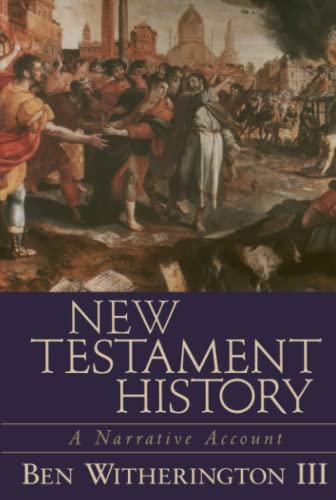 This is an excellent book, and the first thing to note is that it is extremely readable. The layout, style and language all make it very easy to follow, and the footnotes are limited to the essential. It also contains a number of very helpful maps, charts and photographs which give the reader a greater understanding of the subjects being discussed. Recurring throughout the chapters are very helpful sections called, ‘A Closer Look,’ and in these Witherington enters into a more detailed discussion about particular subject areas; e.g. ‘The Pharisees’, ‘Q’, ‘Acts as a Historical Source’, and ‘Paul the Roman Citizen’.

The focus of this work is the NT, from, about 6 bc to ad 100, and as Witherington writes in his introduction, ‘My approach to the matter will involve a focus not only on historic individuals and events, but also on social movements and cross-currents that illuminate those persons and events.’ In order to give an accurate picture of the NT period, the opening two chapters cover the period from Alexander the Great to the birth of Jesus, with the remaining fourteen chapters chronologically covering the years to Domitian (4 bc–ad 96). These first two chapters detail some of the major events and people before the time of Jesus and give an account of the rise of the Roman Empire. There is then a discussion of the life and ministry of Jesus, including details such as a description of the town of Nazareth in which he grew up, the political situation in Galilee and a discussion of the ‘Son of Man’ saying. The remaining chapters of the book cover the ‘Birth of the Church’ and its growth throughout the rest of the first century; the activities of the first Christians in Jerusalem, the expansion of the mission to the Gentiles, the missionary journeys of Paul etc. Particular attention is given to the Roman Empire, its emperors and their interaction with the church during the decades up to the end of the century.

This book will be useful as an introduction to many areas of NT study as well as providing an excellent overview of the social and political climate of the first century ad, the indexes for Scripture, ancient writings and subject, adding to its ease of use. Those making it a starting point for more detailed study may find the lack of footnotes a little frustrating, particularly as many of them refer to other works by Witherington. However, in general this is a very helpful book, particularly for the undergraduate.