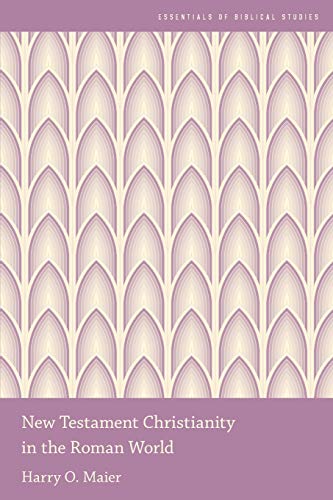 The relatively new Essentials of Biblical Studies series “comprises freestanding, relatively brief, accessibly written books that provide an orientation to the Bible’s contents, its ancient contexts, its interpretive methods and history, and its themes and figures” (p. xvi). In this volume, Harry O. Maier of Vancouver School of Theology aims to “make the familiar strange by locating the New Testament and its audience in a variety of overlapping but distinct ancient contexts” (p. 4). Maier ably considers the social dynamics and developing practices of early Christianity.

Maier begins the process of “making the familiar strange” in his Introduction (ch. 1) by challenging monolithic perceptions of both “the” New Testament and “the” Roman World. Both phenomena, he rightly argues, are more diverse and dynamic than common perceptions, and the use of the definite article, suggest. Following the Introduction, the book consists of five chapters in which Maier discusses the five key “contexts” of the ancient world which shaped the experiences of the early Christians. Chapter 2, “The Gods and the Cosmos,” discusses the pervading presence of religion in public life, the relationship with the divine being one of “asymmetrical gift exchange” (p. 35), and conceptions of the gods, epiphanies, temples and idols, festival, daily rituals, magic, demons, and how eucharist and baptism may be understood in light of this religious landscape. Chapter 3, “The Emperor and the Empire,” spends some time identifying how popular representations of the Roman world can be misleading, before discussing the Roman Empire’s networks and the resulting religious traffic, provincial administration and the function of benefaction and patronage, and a comparatively lengthy treatment on the prevalence of imperial language in the New Testament.

Chapter 4, “The City and Its Residents,” was the highlight of the book for me. Maier’s discussion of the political relevance of the term ἐκκλησία (“church”) led to his observation of the social significance of the use of political language in the New Testament—e.g., ἐκκλησία (1 Cor 1:2), συμπολῖται (“citizens,” Eph 2:19), and πολίτευμα (“citizenship,” Phil 3:20). Maier writes, “All of these passages … express the idea not so much of a place as a new identity. Such language conferred upon women, slaves, and permanent and short-term residents a status otherwise denied to them” (pp. 104–5). By describing the density Roman cities and various residential arrangements in chapter 5 (“The Household and Its Members”), Maier offers a vivid picture of the types of domestic and social spaces in which New Testament Christians lived out their faith.

Chapter 5 also treats issues of male and female gender roles; the status of children, slaves and freedpersons; and the function of “fictive kinship”—the adoption of familial language in Christian communities not strictly limited to blood relatives (p. 171)—in the New Testament. Chapter 6, “The Self and Others,” delves into ancient conceptions of the body, such as those of Hippocrates and Galen (pp. 181–91), and how they showed a valuing of masculinity over femininity. Maier further notes how these values are expressed in the New Testament and early Christian literature. This chapter also discusses Paul’s view of the self in relation to Platonic, Aristotelian, and Stoic conceptions. Maier’s explanation of the various aspects of the Roman world covered in these chapters is clear and helpful, but these chapters also contain the most noticeable element of Maier’s own ideological reflection on the content.

Maier’s nuanced and careful treatment of the Roman world is the strength of this book. For example, when dealing with varying “social contexts”—such as the imperial cult—Maier often notes the differences between the Greek East and the Latin West. He succeeds in giving his readers a clear introduction to this multifaceted world, helping them to gain a better understanding of the challenges and contexts facing the first Christians. Another positive element of the book is the inclusion of sections treating the experiences of the Jews in these contexts in chapters 3–5.

His treatment of Christian diversity, on the other hand, is a touch heavy-handed. He rightly identifies the diversity of the early Christian movement—a diversity that is crucial to acknowledge—but in doing so underplays the unified elements of early Christian belief.

Furthermore, there is a curious element in his discussion of the Church’s relationship with the emperor and empire. Maier makes the argument that state sponsored persecution was less prevalent than is popularly presumed. This is a fair observation, but when he cites Pliny’s correspondence with Trajan, he highlights the Roman governor’s uncertainty in how to treat the Christians but fails to acknowledge that Pliny was quite confident in his decision to execute Christians (especially those who were non-citizens). In this instance, it seems that Maier has mishandled the primary source to downplay the persecution that early Christians faced.

All in all, New Testament Christianity in the Roman World is an excellent introduction to the contexts in which the first Christians lived. The information it provides will no doubt enrich the reader’s study of the New Testament.