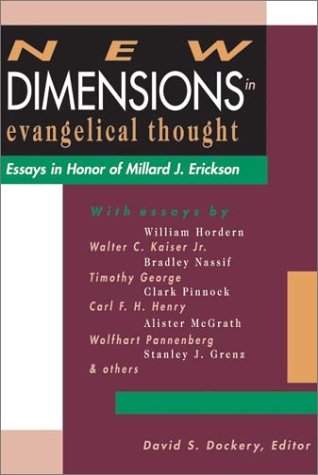 New Dimensions in Evangelical Theology consists of essays by twenty-six evangelical theologians. With the exception of Alister McGrath and Wolfhart Pannenberg, all of the contributors are from North America. There are two chapters on biblical theology; six on historical theology; ten on systematic theology; five in applied fields; and three related to the work of theologian Millard Erickson, in whose honour this book is published. As the title suggests, this collection of essays is intended to inform the reader regarding recent evangelical theological thought. Though there is considerable variation among the chapters with regard to both character and quality, this book does provide theological students with a broad and suggestive evangelical introduction to current theological issues and scholarly literature. Some of the chapters focus on current discussions within evangelicalism (e.g. C. Pinnock on theological method, B.A. Ware on eschatology, B.A. Demarest on spirituality), while others provide an introduction to current discussions of topics which are being significantly addressed by both evangelical and non-evangelical scholars (e.g., T.R. Schreiner on NT theology, M. Anderson on Reformation theology, R.V. Rakestraw on angels and demons). Some essays draw upon and engage evangelical literature almost exclusively (e.g. L.I. Hodges on scripture, T.S. Rainer on evangelism), while others introduce the reader to a wide range of scholarly perspectives (e.g. Schreiner on NT theology, Anderson on Reformation theology, J.S. Feinberg on the doctrine of God). In some cases the authors limit themselves to describing current scholarly discussions, while in other cases the authors also articulate, or at least suggest, their own constructive proposals. As might be expected with a multi-author work of this kind, there are very few explicit connections between chapters. Nonetheless, there are some interesting serendipitous linkages, such as Anderson’s consideration of ‘popular belief in his chapter on Reformation theology and Demarest’s discussion of the Protestant heritage in spirituality. Taken as a whole, the book provides an illuminating window into the current state of North American evangelical theological scholarship, and is thus a useful resource for theological students. (In this respect, the book is a fitting tribute to Erickson, a widely respected senior statesman among evangelical theological scholar-educators.) By virtue of the people the editor enlisted to make contributions, the reader is introduced to the thought of both senior scholars who, like Erickson, have been formative influences on the shape of evangelical scholarship in their respective disciplines in recent decades (e.g. W.C. Kaiser Jr., J.R. Williams, Pinnock, C.F.H. Henry, R. Nicole, Demarest), as well as well as younger scholars who are increasingly significant voices within evangelicalism (e.g. Schreiner in NT, B. Nassif in Patristics and Eastern Orthodoxy, A.E. McGrath and S.J. Grenz in theology). Usefulness to students is further enhanced in that most, though not all, of the chapters contain abundant bibliographic information, several chapters being bibliographic essays (Garrett on recent studies in Patristics, Anderson on Reformation studies, Nicole on the Holy Spirit). In his chapter on evangelical theological education, Timothy Weber chronicles the ‘mainstreaming’ of North American evangelical seminaries from the 1940s onwards. This book provides a sampling of the scholarly and theological fruit which has been born in no small measure (though by no means exclusively) in and through the professors and graduates of these schools. And, this sampling demonstrates both that evangelical theological scholarship has in many ways matured as it has been ‘mainstreamed’, and that evangelicalism now entails an increasingly diverse range of perspectives. Future developments in evangelical thought will demonstrate whether or not we have the maturity to be proper stewards of this diversity.