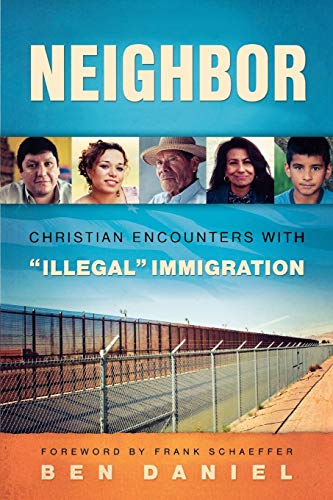 Migration is a global phenomenon that today is occurring at unprecedented levels. While migration always has characterized the history of humanity, the staggering numbers that are being witnessed now-over two hundred million-have never been seen before. People are moving within their nations or to other countries because of natural disasters, armed conflicts, and economic need. These large shifts in population are causing all sorts of reactions in the receiving communities-from compassionate welcome to rejection born of uncertainty of the impact that newcomers might have on native culture, societal infrastructures, and security.

Ben Daniel's Neighbor: Christian Encounters with “Illegal” Immigration focuses on a specific immigrant population: Hispanics crossing into the United States along its southern border with Mexico. The author states his purpose very clearly in the Introduction: “My desire for this book, then, is not so much that it will inspire charity or political activism (thought I do not wish to discourage either), but that readers will recognize in undocumented immigrants the potential for long-lasting, life-giving friendship” (p. xix). His is an effort to give immigrants-especially the undocumented-a human face.

Neighbor is divided into three parts, each of which ends with a section titled “Reflection and Action,” which offers suggestions for further discussion and practical engagement on the topic of immigration. The first part covers four chapters, the first of which presents an account of the life of Father Toribio Romo González, a Mexican martyr who is the patron saint of immigrants; he was canonized by Pope John Paul II in 2000. Chapter two briefly surveys the relevant biblical material, while chapter three looks at the importance of immigration in church history, with an emphasis on Calvin's Geneva.

Part two is shorter, only two chapters long. Each chapter focuses on an official of the United States government. The first is a Democratic representative of California, who for a long time has worked for the reform of immigration legislation. The second is a federal judge in Las Cruces, New Mexico, which is close to the Mexican border. This judge's Christian faith informs how he treats and sentences undocumented immigrants who appear in his court. This part of Neighbor offers a view from the other side of the law: these are vignettes first coming from one who wrestles with crafting immigration legislation; the other comes from one enforcing current policy. Both the representative and the judge demonstrate that the immigration laws in the United States are misdirected, and they do what they can to bring empathy and common sense into the national debate.

Part three contains four chapters, which describe, in turn, the Frontera de Cristo ministry to immigrants on both sides of a border crossing in Arizona, an organization called CRREDA, which leaves water in the desert for those making that dangerous trek, the New Sanctuary Movement, and educational programs in San José, California, designed to empower immigrant children and their parents. As in the rest of the book, the information is communicated through the lens of the author's encounters with people directly involved in these efforts. Neighbor closes with ten provocative Study Questions, endnotes, and a helpful index.

The strength of Daniel's work is its personableness. He writes in an easy-to-read style, and the stories of his experiences with such diverse individuals in so many different contexts are engaging and interesting. Immigration is about people-the people who have risked so much to cross national borders, the people who work to improve the legal realities of the national immigration system, and the people of the multiple civil and religious organizations and projects that reach out to these vulnerable newcomers. The book's conclusion, “Mi Beautiful Barrio,” explains the title. His urban barrio (the Spanish word for “neighborhood”) is a fascinating mix of Hispanic and Asian immigrants and native-born. They have become friends, fellow families in a shared life. These immigrants truly are Daniel's “neighbors.”

The theology section of the book is not very detailed, and the historical survey is limited. Daniel, however, does exemplify a few categories that he mentions in passing. One is the need for a new “religious imagination,” a sensitivity to the spirituality of immigrants that sustains them in the quest for a better life (pp. 55-56). He also suggests that the church maintain a “prophetic suspicion” towards those in power who do not regard the plight of the needy (p. 71) and a “prophetic witness” to the truth of immigration realities (pp. 128-29). These exhortations are what this book is all about. Daniel's is a call to welcome the stranger in the name of Christian compassion and hospitality and because of our common humanity. To do otherwise, he claims, would be to fall prey to the angry fear toward the outsider that has characterized so much of American history.

Some may say that this book is thin in theology and Bible and discount it. I would respond that the strength of Neighbor lies elsewhere. It is in introducing the reader to a complex topic through the door of story into a world of real, needy people. This is not a theological treatise on immigration; it is about Christian incarnation at a time when nationalism and xenophobia can override faith. For that reason, Neighbor is worth reading.