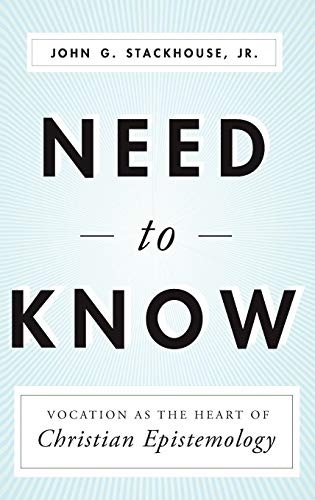 Need to Know: Vocation as the Heart of Christian Epistemology

With this volume, John Stackhouse has entered the epistemological fray and made a significant contribution to the conversation about faithful Christian thinking. This book is about how we human beings access truth, and in it the author—who is doubtless well known to readers of Themelios—proposes a new epistemological paradigm that attempts to navigate between the Scylla of Enlightenment overconfidence and the Charybdis of postmodern despair.

In the introduction, Stackhouse begins to motivate the paradigm that he will propose by critically considering several popular models of what it means to think “Christianly.” After considering the strengths and weaknesses of conservative, mystical, and liberal Christian models of thinking, and finding each of those ultimately unsatisfactory, he concludes that there is warrant for adopting the Protestant Quadrilateral, which takes Scripture, tradition, reason, and experience to be valid sources of knowledge for human beings, with Scripture being normative among those. Yet even this is not without qualification. In the end, Stackhouse will modify this old and revered model in an attempt to fit it to our actual God-given situation. Recognizing that Christian thinking is supposed to be responsive to God and his world and to support Christian service, the driving assumptions underlying Stackhouse’s paradigm are that God calls us to a particular kind of life and to particular individual vocations, that God provides the resources—including cognitive resources—that we need to fulfill our callings, and that what we need to know will be relative to our specific callings. Thus, we can trust God to provide what we need epistemically to fulfill our particular vocations. However, it also follows that God might well not supply us with knowledge about things that are not related significantly to our particular vocations. As Stackhouse puts it, “we can count on God granting us knowledge only according to our vocation—only, as the saying goes, on a ‘need to know’ basis” (p. 21).

Chapter 1 sets the contemporary stage for Stackhouse’s vocational epistemology by considering the cognitive pluralism and skepticism that characterize the postmodern situation and the historical and cultural genesis of that pluralism and skepticism, beginning with the Enlightenment. In Chapter 2, Stackhouse explores the notion of vocation from a biblical perspective and the implications of vocation for epistemology. His investigation includes attention to redemptive-historical dimensions (creation, fall, redemption, consummation) and social-ecclesial as well as individual dimensions. Throughout, there is the recurrent theme that whatever Christians and the church need in order to fulfill their callings, including knowledge, God can be trusted to provide.

Stackhouse lays out his own positive proposal in Chapters 3 and 4—a self-conscious version of critical realism that is thoughtfully motivated and developed, and that has much in common with the Scottish common sense realism of Thomas Reid and company. In the third chapter, he discusses the elements of his model. The author recognizes five basic resources for our thinking—experience, tradition, the academic disciplines, art, and Scripture. We exploit these resources via three “modes” of thinking: intuition, imagination, and reason. Stackhouse devotes considerable attention to each of these resources and modes, considering not only the nature of each, but something of how they interact to enable us to do and be what we are called to do and be.

He fills in details of the picture in Chapter 4, exploring how we utilize our five resources and engage with them in our different modes of thinking in what he calls a “pentalectic” (p. 148)—a “five-way conversation.” After noting some of our significant cognitive limitations and considering the essential, ineluctable role that interpretation plays in all of our thinking, he proceeds to examine such matters as the authority of Scripture and the cognitive roles of hypotheses, metaphors, and worldviews. In a section in which he draws a distinction between credibility (which is normative) and plausibility (which is not), he gives some defense of his model against the charge of antirealistic relativism. Much of the chapter is devoted to discussing the social dimensions of our thinking. As always, Stackhouse is keen to recognize our finitude and fallenness, as well as the common grace advantages of thinking within the context of our social situations. He maintains that responsible thinking requires that we critically assess the elements of our social contexts and seek to improve our situations to the end of thinking more faithfully. Particularly helpful here is his discussion of the role of trust in the authority or expertise of others.

Early in the final chapter, “Deciding in an Ambiguous World,” Stackhouse endorses a general principle that our beliefs ought to be controlled or proportioned (à la Locke), not only by the relative warrant we have for them, but also by their relative importance to us in our particular contexts. He goes on to develop and qualify that principle carefully, and consistently avoids falling into doxastic volitionalism (the view that we have direct control over our believing). This chapter includes a brief but insightful challenge to the modern bifurcation of faith and reason. The author also considers some of our significant cognitive limitations and the enabling epistemic roles played by various normal aspects of the Christian life (e.g., prayer, corporate worship). The chapter ends with a thoughtful discussion of the disciplines of responsible Christian thinking, which Stackhouse takes to be means of grace. Following the lead of Thomas Reid, Stackhouse develops an epistemology marked by humble gratitude, trust, and obedience. As he notes at the end, the epistemology that he recommends here “trades fundamentally on faith, hope, and love” (p. 242). The book concludes with an appendix in which the author attempts to show how his epistemological model has worked to inform his understanding of gender.

This book will benefit both church and academy. Stackhouse draws from a rich variety of sources in developing his epistemological paradigm—e.g., Calvin, Locke, Reid, Wolterstorff, Alston, Plantinga, Polanyi, Kuhn, and Code, to name but a few. Yet he develops an epistemology for everyone, not just for philosophers. One of the many strengths of the book is its sensitivity to our createdness and fallenness and the complications that arise from both in our situation, as well as the covenantal way in which God relates to us. Also significant is the author’s recognition that we are by nature interpreters who are constrained to work with our interpretations of the data from our resources. A further strength is the author’s avoidance of the sorts of reductionism that have plagued most modern and postmodern epistemologies. While some evangelical readers will find themselves a bit uncomfortable with some aspects of Stackhouse’s view of Scripture, they will appreciate his recognition of the primacy of Scripture among our resources. Finally, although in my judgment the author at times concedes more than is necessary to skepticism, and I’m not convinced that his response to the charge of cognitive relativism is fully satisfactory, he nevertheless produces an epistemological model that is appropriately humble and confident. This book should prove helpful and encouraging to pastors, academics, and Christians in general who are concerned about thinking in ways that are faithful to Jesus, who is Lord over everything, including the life of the mind.

John Calvin Wingard Jr. is professor of philosophy and dean of the humanities division at Covenant College in Lookout Mountain, Georgia.