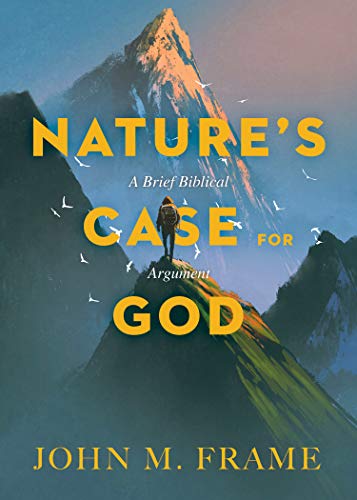 In this splendid little book, John Frame provides readers with a concise “natural theology.” In distinction to some in his Reformed tradition who would contend that a natural theology is impossible, Frame believes that Scripture itself teaches that it is impossible for us to escape that “God is revealed everywhere” and that we must “obey his revelation in all creation” (p. 4). Far from “pushing Scripture to the side” in these theological musings, therefore, Frame desires to construct a “biblical natural theology” as he ruminates on the theological implications of nature within the revelatory confines of God’s word (p. 9). The “fundamental goal” of the volume is to “show forth the glory of God in the world God has made” in order that readers may joyfully join their voices with the Psalms to proclaim that “the heavens really do declare the glory of God and the sky above proclaims his handiwork” (p. 13).

Frame’s separates his work into two parts: the first examines the theological witness of the world, and the second, human nature’s witness to the divine. He also includes an epilogue and four excerpts from personal correspondence that are germane to the topic. Part 1 is comprised of five brief chapters, each of which details how God’s glory is observed in nature. Chapter 1 examines Scripture’s testimony to God’s greatness evidenced in creation. Frame argues that nature’s “sheer size” moves the careful observer to affirm the indescribable greatness of creation and then appreciate and acknowledge the Greatness. In chapter 2, Frame contemplates the way in which creation testifies to God’s oneness: only One can unite the mesmerizingly complex stories of nature and history into one, unified story. The third chapter builds on the second to detail how God’s wisdom is manifested in the knitting together of this great story, wherein both the parts and the whole bespeak of the wisdom displayed by the Great One. In chapter 4, Frame contends that the earth’s consistent operations point to God’s goodness, which he argues is the foundation of all morality. In the last chapter of this section, Frame discusses how creation evidences God’s “nearness.”

The second part of Frame’s volume investigates how human conscience gives witness to God. Its four chapters detail four different “kinds” of consciences and their respective, divine testimonies. For Frame, the conscience is “our knowledge of good and evil, our knowledge of morals and ethics … a deeply personal experience … our actual sense of good and bad in ourselves and others” (pp. 77–78). Frame first speaks of the “seared conscience.” Though warped and hardened, it is not without a moral witness, for the slightest prick of “moral principles” is the “voice of God” speaking even to the hardest hearts (p. 81). The next chapter describes the witness of the “accusing conscience,” which can simultaneously accuse of wrongdoing, and excuse one of the same. Nevertheless, God’s faint voice is still heard. In the third chapter of the second section, Frame describes the “awakened conscience.” This conscience has been purified by God’s grace in Christ and hearkens to his voice. The last chapter of this section highlights the witness of the “good conscience,” which is “able to behave faithfully in the main thrust of his or her life.” Such a person “may not be justly accused of fraudulent religiosity … [for] the good conscience evaluates our conduct rightly” (p. 101). Summarizing these chapters, Frame states that “from the deepest depravity in the seared conscience to the highest level of Christian maturity in the good conscience, conscience bears witness to God, speaking to us of who he is and of what he wants from us: holiness and righteousness” (p. 102).

This little book was a delight to read. Its compact, one hundred pages are easily digestible. Frame uses helpful examples throughout and writes in a clear, easy manner. He provides a concise summary of how Bible-believing Christians can construct a natural theology with the help of the Scriptures. Its structure helpfully moves the reader from the general to specific in the first section, and from the lesser to the greater in the second. Readers familiar with Frame’s other writings will find that this book strikes a different cord. Those expecting a careful, systematic, and comprehensive handling of the subject, therefore, will be disappointed. In several places, however, particularly in the preface, Frame points interested readers to his other writings where he engages the relevant theological and philosophical issues in greater depth.

Those familiar with Frame’s other works, and especially with the presuppositional school of apologetics with which he is associated, may wonder if he is entirely consistent with what he and others have asserted elsewhere about the validity, or even the possibility, of natural theology in light of the fall and its noetic effects. A close reading of the preface, however, evidences that Frame is well aware he will be charged with inconsistency, stating “the school I am associated with” seriously questions the entire enterprise of natural theology, which is why he “must give an argument for its legitimacy” (p. 3). The preface serves as his justification for this attempt at a “biblical natural theology.” Not only though, does Frame provide this justification, he seems to imply that he is more consistently “presuppositional” by attempting to construct a natural theology than those presuppositionalists who would reject the attempt all together. He argues that since “the Bible says that God is revealed in everything he has created,” and since “presuppositional apologetics is particularly concerned to be subject to Scripture in its reasoning,” he is the consistent presuppositionalist given that “our presupposition urges us to look at the world God has made” (p. 4). Even in the face of the noetic effects of sin (which is the significant, objectionable-sticking-point for those of the Reformed and/or presuppositionalist school), Frame argues for the “clarity of natural revelation” from the Scriptures, and this revelation’s “high importance” in the salvation of sinners, since it “serves as its presupposition,” “establishes the reality of sin,” and “makes the gospel necessary” (pp. 11–13). Frame contends, therefore, if the “arguments from this book are sound,” a consistent presuppositionalist must then affirm, in view of the Bible’s teachings, that nature teaches “not only that there is a God, but we can know him” (pp. 60–61).

Having made such strong statements at the front of his brief volume, the reader may be surprised that Frame is not as consistently “biblical” in his construction of this natural theology as he proposes it will be. Some of his chapters appear more speculative than forcefully biblical, a few others are devotional in nature and use a text as but a starting point for his extended contemplation, while others are significantly biblical. So, one is left wondering if Frame or his presuppositional compatriots are more consistent in their application of their presupposition to the question of natural theology. In addition, one may also leave a bit foggy as to what Frame believes the various consciences are intended to particularly teach about God, short of their simple testimony to God’s existence.

With all this being said, while at first blush the book seems most appropriate for the “non-academic,” and a helpful, pastoral resource for an inquisitive parishioner about general revelation, the volume is in fact a significant, yet subtle, attempt by Frame to challenge a significant doctrine of the presuppositionalist school. For this reason, while the book is small, and could easily go unnoticed by Frame’s typical readers, it has massive significance within his corpus, and thus cannot go unnoticed by those interested in his writings or the larger conversations taking place within Reformational thought.