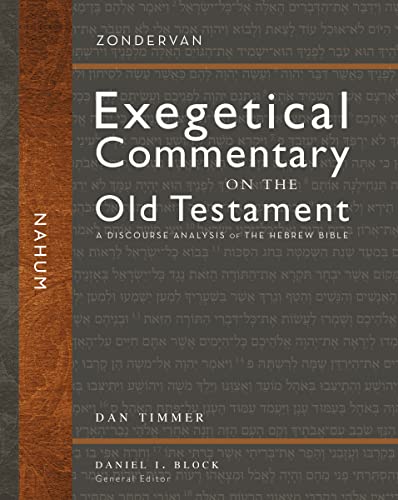 This series, described as “a discourse analysis of the Hebrew Bible,” has long attracted me, though this is regrettably the first volume I’ve examined. It won’t be the last. Although Bible commentaries used to focus on answering, What does it mean? and then perhaps, So what?, many have lately shown additional interest in the questions, How does it mean? and What does it do? Various linguistic and literary devices are shown to impact the readers in a certain way. The terms “rhetorical/discourse analysis” or, as series editor Daniel Block points out, “macrosyntax” are used. Purpose has taken its rightful place beside meaning, and rhetorical force beside message. Combined with biblical theology, this approach provides a clearer path to contemporary relevance. Block has charted a course for the series that promises to provide us with a solid foundation for biblical preaching and Christian living.

This volume on the little-known and less appreciated book of Nahum will abundantly repay study. It exhibits well the four necessary attributes of a great Bible commentary. First, it is based on competent, independent analysis of the original language text, using the latest linguistic resources, and drawing from the best in scholarly research (note especially the reliance on textlinguistics from such authors as Buth and van der Merwe, Naudé, and Kroeze). Timmer also shows not only how the parts contribute to the whole, but also how the text’s grammar and syntax create meaning. The commentators he cites most often are Spronk, Fabry, Christenson, Longman, and Roberts, although he draws from most other major recent works on Nahum.

Second, Nahum’s message is shown to fit the original historical and cultural setting so far as it can be known. Timmer shows particular expertise in this area. Many recently published Assyrian inscriptions are quoted or cited to provide religious-political background to better understand Nahum’s message. They show Nahum’s familiarity with and use of Assyrian propaganda to provide hope and comfort to his true Judean audience (e.g., the flood motif in 2:7[6] and the lion metaphor in 2:12–14[11–13]).

Third, Nahum is interpreted holistically. First, Timmer shows how each part contributes to forming the message and achieving the purpose of the whole. Most important, he shows how the narrowness of God’s judgment against Assyria and deliverance of Judah in most of the book emerges from God’s eventual universal judgment prophesied in 1:2–8. Although universal guilt is assumed there, so is the possibility of anyone finding refuge by trusting in Yahweh’s goodness (1:7). Timmer also integrates the book into its canonical context, relating it to the theological concepts found both in earlier and in later books, including the NT, thus where it fits in the divine plan of redemption. Since God’s redemption is ongoing, this means explaining the book’s ongoing relevance. For example, he shows how Nahum contrasts the characteristics of those who are reconciled to God and those who are not. He also notes that the abuses of Assyrian imperialism are with us today. Finally, he argues that Christian Christocentrism parallels Nahum’s message. On the issue of Nahum’s place in the Twelve, Timmer cautions against discounting the reading of each book’s “historical setting and unique perspective” (p. 56). A comparison between Jonah and Nahum, for example, must recognize that Jonah is set during a time of Assyrian unrest, while Nahum, about a hundred years later, shows Assyria “as strong as ever and so much less inclined to repent” (p. 57).

Fourth, the commentary displays a tone of humility: it does not claim more than the evidence allows and shows respect for alternative views. Timmer does an excellent job of supporting his interpretations with the evidence rather than engaging in distracting polemics against the views of others. I appreciate the many charts, especially laying out the Hebrew clauses in each section with a literal translation, showing how the clauses relate to each other and how the analysis emerges into an exegetical outline.

The weaknesses of this work are few but must be acknowledged. For example, although Timmer helpfully cites several foreign-language works inaccessible to many readers, he appears to ignore some older works such as commentaries by O. Palmer Robertson and Walter A. Maier, and along with them the fact that “the great city of Nineveh” (Jon 3:2) was lost until the mid-nineteenth century (W. A. Maier, The Book of Nahum [Saint Louis: Concordia, 1959], 278). Also, a few times a statement in the text is redundantly found in a footnote. More importantly, the irony in the lion motif of 2:11–13 [Heb 2:12–14] is insufficiently recognized. To explain the motif’s use, Timmer cites many examples of Neo-Assyrian kings, especially Nahum’s contemporary Ashurbanipal, portraying themselves as lion hunters (pp. 139–40). Nahum, however, portrays Yahweh as the lion hunter and Assyria as a pride of lions. Although the image of a raging lion is used of other Assyrian rulers, Ashurbanipal is especially known for his royal lion hunts, as Gordon Johnston has noted (“Nahum’s Rhetorical Allusions to the New-Assyrian Lion Motif,” BSac 158 [2001]: 305). Thus, Nahum shows Ashurbanipal the lion killer being killed like a lion by Yahweh. Although Timmer mentions Johnston’s article (p. 143), he downplays the irony.

Despite minor weaknesses, this will be the first commentary on Nahum I turn to in my continuing study of this important book.