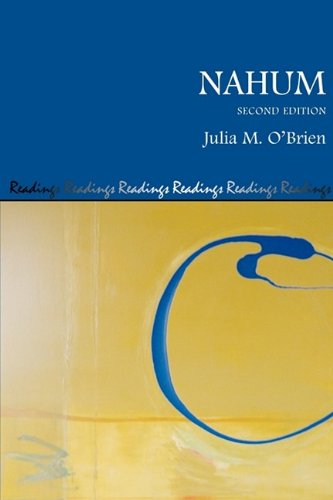 The concern of this commentary is the rhetorical configuration of Nineveh, Judah and Yahweh in the book of Nahum and the modes of thinking and action encouraged in readers. Historical and theological perspectives are played down in favour of an intertextual and sequential reading that explores literary features and a concern with uncovering fissures which deconstruct the contrast of opposites on which the book of Nahum relies. O’Brien is primarily interested in discussing the ethics of the book and while she wants to resist Nahum’s ‘wanton celebration of violence’, she does not want to ‘dismiss Nahum as ethically inferior’ (29). The actual commentary, which in keeping with the series offers little interaction with secondary literature, takes up 44 pages. It is followed by twelve plates and chapters on Nahum and (Wo)men (17 pages), Nahum and Atrocity (25 pages), and Nahum and the Nations (19 pages). A postscript suggests that the terrorist attacks of 11 September 2001 and reactions to it confirm the need to name false dichotomies, as undertaken in this commentary, as ‘the demonization of the other feeds the cycle of violence’.

The commentary section is lucid and reflects thoughtful engagement with the biblical text, even though her reading of the text is not always persuasive and sometimes, to my mind, way off the mark, e.g., when she claims that:

while the designation of Nahum as a seper [book] attempts to restrict the divine word to the parameters of the book, the recognition that its ultimate authority derives from its visionary character works against such containment. Other vision are always possible, waiting to spoil the boundaries and authority of this book (46).

Or that ‘the marking of 1.12 as the word of Yahweh unmarks the divine origin of the verses that have preceded it’ (57). In my view, O’Brien introduces unnecessary dichotomies and is least convincing in her attempts to separate aims of the text from unintended effects. She suggests that ‘Nahum 2 attempts to soothe the anxiety that is provoked by reading Nahum 1’ but in its continual obscuring of identities ‘feeds the very reading anxieties it aims to squelch’ (64). But how does she know that the former is what the text was designed to do? Comments like these suggest that it is hard to seriously discuss a text without talking about intentionality and yet it is when O’Brien talks about the intentionality of the text that I find myself unpersuaded, no doubt because unlike O’Brien I am not inclined to think the worst of the author and the depiction of Yahweh in the book.

The first chapter following the commentary reviews (English-language only) feminist discussion of Nahum. O’Brien sides with those like Butler who argue against an essentialist understanding of sex, claiming that ‘bodies are not simply born as male or female; rather the societal gaze sculpts them into conformity’ (98). Consequently, she suggests that to identify with the female characters of the book ‘offers no real liberation’ (101). The second chapter argues that previous responses to the violence of the book are inadequate and instead explores the instability of the oppositional differences in the book and the need to give faces to the other (to which the plates reproduced in the commentary contribute). The third chapters compares and contrasts Nahum with Jeremiah 46–51, Obadiah, and Lamentations.

This volume is evidence of a serious struggle with the text and as such offers insights and challenge to other readers. While the patchy use of scholarly literature is regrettable (especially the lack of interaction with Sweeney, given her focus on the use of pronouns), its main limitation for evangelical students is the lack of an explicitly Christian perspective on justice and suffering or indeed the nature of God and its main disconcerting aspect the lack of any sense of the biblical text as divine revelation.