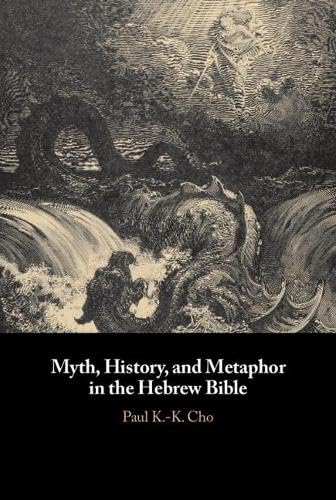 Myth, History, and Metaphor in the Hebrew Bible

This is a PhD dissertation completed in 2014 at Harvard University under the supervision of Jon Levenson. The book’s title suggests a general exploration of myth and history with reference to metaphor, but the original Harvard dissertation’s title of “The Sea in the Hebrew Bible: Myth, Metaphor, and Muthos” is more accurate for highlighting Cho’s focus on the sea as a mythological motif. Beginning with Hermann Gunkel’s 1895 publication of Schöpfung und Chaos in Urzeit und Endzeit, Old Testament scholars have debated whether the Hebrew term תְהוֹם (“deep, abyss”; Gen 1:2) represents a demythologization of Enuma Elish’s portrayal of the Babylonian sea goddess Tiamat. In contrast to both positions, Cho asserts that the either-or choice between myth and history is unnecessary because “the relationship between the Hebrew Bible and sea myths is metaphorical, which is not to say that is merely ornamental—but neither is the relationship one of literal equivalence or figural similitude” (p. 3).

The novelty of Cho’s approach lies not so much in its use of metaphor theory to approach the myth-history nexus (see, e.g., Ronald A. Simkins, Creator and Creation: Nature in the Worldview of Ancient Israel [Peabody, MA: Hendrickson, 1994], 41–81), but in his claim that the so-called Chaoskampf lies at the center of the Old Testament: “The sea myth did not only color biblical historiography and theology but also gave shape to its theological and historical imagination as its structuring principle.… Biblical writers mapped all biblical time, from the creation to the eschaton, onto the plot of the sea myth” (p. 10, italics added). The result of this totalizing approach to myth resembles older OT scholarship in identifying a single Mitte for OT theology, such as covenant for Walther Eichrodt or the promise-plan of God for Walter Kaiser, Jr. Accordingly, Cho’s proposal for the sea myth exhibits the same propensity to combine a heuristic sense for the unity of the OT with an inability to encompass its diversity.

Cho’s book unfolds across eight chapters. Following an opening chapter to situate his argument, chapter 2 offers Cho’s own definition of myth as “a story about weighty matters involving deities, human beings, and other personalities that, in the understanding of its adherents, reveals something true about the real order of the world” (pp. 11–12). While such a broad definition falls within the mainstream of myth studies, Cho’s use of the underlying Aristotelian term muthos shows that he regards myth narrowly as the narrative feature of plot: “the muthos of a story is the events set in their chronological order” (p. 15). Cho also draws on Paul Ricoeur’s theory of metaphor to propose that the biblical writers used the sea myth “to enflesh and motivate their accounts…. They do not retell the sea myth, but they recount what they believed or hoped are real events as metaphor displays” (p. 33). Chapter 3 builds on these theoretical foundations by summarizing the main ideas from Mesopotamia’s Enuma Elish and Ugarit’s Baal Cycle. Cho finds that they both contain the four characteristic themes of the sea muthos: combat and victory over the sea, creation, temple, and kingship (p. 63). The next four chapters examine this myth’s presence in OT texts on creation (ch. 4), the exodus (ch. 5), the exile (ch. 6), and the eschaton (ch. 7), followed by a concluding chapter.

Cho succeeds in showing that the choice between myth and history in the OT often becomes a false dichotomy which is at odds with ancient Near Eastern ways of thinking. However, two significant problems hamper his work. First, Cho never resolves the tension between his thesis that “the sea myth is the ocean that bears the islands of biblical literature and thought” (p. 10) and the textual reality of “the fragmentary nature of biblical allusions and references to myth” (p. 17). If the sea myth in the OT were truly ubiquitous as water, it would be at best an ocean which is rarely visible, or at worst like minor waterways which surround the OT’s massive continents of historical narrative and non-mythic poetry. It is true that OT writers use the imagery of primordial combat as one way of conceptualizing creation (as in Psalms 74 and 77), but Cho has overlooked his Doktorvater’s observation that the Hebrew Bible also speaks of rebellion from within creation itself, which has nothing to do with mythic conflict (Jon D. Levenson, Creation and the Persistence of Evil: The Jewish Drama of Divine Omnipotence [Princeton: Princeton University Press, 1994], 10). Simply put, Cho’s recognition that each phase of biblical history can be described with sea imagery does not support his conclusion that this is the most dominant, or even a common, way of doing so.

Second and more seriously, the book can be dismissive of alternative evidence and explanations. As one example, Cho fails to engage the substance of David Tsumura’s case that Hebrew תְהוֹם is closer to Ugaritic thm, which is used metaphorically without personification, rather than the Akkadian goddess Tiamat. For Cho to aver that “the conclusion of his [Tsumura’s] study is a case of missing the forest for the trees… The two words [tĕhōm and Tiamat] may not be directly dependent etymologically, but they are cognates nonetheless of a common Proto-Semitic word” (p. 78) misrepresents Tsumura as a linguistic naïf who had not shown in detail that the Hebrew and Akkadian cognates are “false friends” for their divergent usage (see Tsumura’s Creation and ,Destruction: A Reappraisal of the Chaoskampf Theory in the Old Testament [Winona Lake, IN: Eisenbrauns, 2005], 42–49). A similar tendency can be seen in largely ignoring the important works of Debra Scoggins Ballentine (The Conflict Myth and the Biblical Tradition [Oxford: Oxford University Press, 2015]) and Rebecca Watson (Chaos Uncreated: A Reassessment of the Theme of “Chaos” in the Hebrew Bible, BZAW 341 [Berlin: Walter de Gruyter, 2005]).

Though Cho’s book is the newest work on the age-old topic of myth and history, it represents a throwback of sorts to the “parallelomania” that characterized a bygone era of OT scholarship. The aforementioned books by Ballentine and Watson are superior for being more methodologically disciplined and text-oriented in their treatment of OT sea imagery.