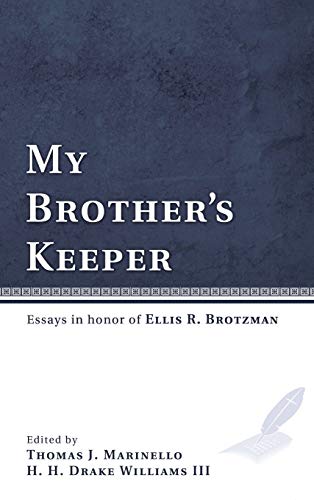 My Brother’s Keeper: Essays in Honor of Ellis R. Brotzman

This collection of essays was written and assembled by faculty and board members of Tyndale Theological Seminary, located in Badhoevedorp, the Netherlands, just outside of Amsterdam. The publication commemorates the school’s twenty-fifth anniversary and is dedicated to Dr. Ellis R. Brotzman upon his retirement after being at Tyndale for nearly its entire history.

The fifteen essays offer wide-ranging and diverse studies from various theological disciplines. Part 1 contains five biblical studies essays. Dr. Brotzman himself addresses the “synoptic problem” of the three accounts of Hezekiah’s reign (2 Kgs 18–20; Isa 36–39; 2 Chr 29–32), suggesting that the author of Kings was reliant upon Isaiah. W. Creighton Marlowe examines the meaning of אמת in the Psalter, concluding that in most cases “loyalty,” “reliability,” or “trustworthiness” are preferred translations over “truth.” Walter L. Liefeld provides a reading of the Emmaus narrative (Luke 24:13–35) that helps readers “enter into the experience of the two travelers as they met the risen Christ” (p. 43). Martin Webber examines the role the Lord’s Prayer played in developing Christian identity vis-à-vis Judaism through the middle of the third century. He concludes that as early Christians moved from reliance on oral to written authority the prayer was increasingly associated with baptism, became less Jewish, and established itself as the distinctly Christian prayer. H. H. Drake Williams III contends that much misunderstanding has followed from treating Jas 5:16b without regard to its literary, Jewish, and Christian contexts. In redressing this he concludes that James encourages prayer by emphasizing the type of prayer and the type of person praying (more than, say, the use of oil) that results in “extensive, life-giving, divine blessing upon God’s people” (p. 86).

Part 2 consists of six theological studies essays. Philip A. Gottschalk argues that Martha Nussbaum’s study of Hellenistic philosophers, especially Seneca, is incomplete without an examination of pre-medieval Christian sources. This lack of due diligence may be more the result of Nietzschean prejudices than warranted omission. Linda Gottschalk-Stuckrath provides a very helpful study of the history (national, institutional, and personal) leading up to the Arminius-Gomarus debate in Leiden in the early seventeenth century that resulted in the Remonstrance and the Canons of Dort. Thomas J. Marinello details the central importance of the Lord’s Supper in Brethren communities as a mark of unity and, to some, purity during and after the Reformation, having perceived in some Protestant circles a “relegation of the ‘remembrance feast’ to a place of secondary importance” (p. 128). Ronald T. Michener attempts to counterbalance too hastily drawn judgments against postmodernism by evangelicals. After delineating four tenets of postmodernism, with both negative and positive propositions, Michener argues that more paradigms of postmodern thought can be seen as friends to evangelicalism than have sometimes been tolerated. David P. Parris considers the historical event of the resurrection in view of contemporary practices of historiography. He shows that Ernst Troeltsch’s principles of criticism, analogy, and correlation “are not necessarily antagonistic towards the resurrection as a historical event,” but that “[t]he more intractable issues that confront someone arguing for the historicity of the resurrection arise from the presuppositions that the historian brings to his study,” often (usually?) in the form of “chronological superiority” (p. 171). Ralph W. Vunderink examines the OT background and NT material on the sacrifice of Christ and reviews the historical progression of the ransom, satisfaction, and love theories of the atonement. He concludes that victory over Satan, satisfaction to God, and divine love for sinners are three motifs underlying Christ’s atonement; no one should be isolated at the expense of the other two.

Part 3 comprises four pastoral and intercultural studies. Gerald C. Ericson lays out why encouragement, affirmation, and motivation from leaders are so important and gives guidance for staff-level application of the same. Stephen B. Kellough provides pastoral guidance for “Resting in a Fast-Food World” (his essay title), namely, by learning from Jesus’ observation of the Sabbath. Mark A. Lamport demonstrates the need for, and offers steps toward, making churches places of Christian culture leading to individual formation. Finally, Cecil W. Stalnaker critiques “postmortem evangelism” in its various forms and exposes its many shortcomings.

While each of these essays deserves further attention and interaction, I am going to exercise my reviewer’s prerogative and comment on only two of them, Parris’s and Michener’s.

Michener also broaches philosophical trends in his essay, “Kingdom of God and Postmodern Thought: Friends or Foes?” This too is a helpful counterbalance to popular trends in apologetics, providing a more sympathetic presentation of postmodernism. That said, I do wonder if Michener puts postmodernism’s worstfoot forward. Granted, postmodernism “is a mood or condition challenging many of our epistemological comfort zones that stem from modernity” (p. 143). However, modern epistemology is not postmodernism’s only target. All metanarratives come under postmodernism’s attack, and that includes the gospel of Jesus Christ’s universal lordship. Moreover, Michener tells us that understanding is community based. Again, granted. However, do postmodernists speak of a community-based understanding or a community-based truth? If it is primarily the former, then I will again agree with Michener’s assessment. But if it is the latter, then I cannot see postmodernism’s compatibility with the gospel on this point. The church of Christ does not ground, create, or define the truth, but is grounded, created, and defined by the truth. While I appreciate Michener’s attempt to balance our understanding of postmodernism, overcompensation can result in imbalance as well. I for one think that further consideration of the role that special revelation plays in Christian epistemology can help in our interaction with postmodern thought.

In sum, My Brother’s Keeper gives us a window into Tyndale Theological Seminary. The eclectic collection of essays touches on the diverse types of skills pastors and missionaries need to possess: exegetical, theological, pastoral, lexicographic, text critical, historical analytic, biblical theological, philosophical, homiletic, intercessory (and the list goes on). If the caliber of these essays is in any way indicative of the quality of education provided at Tyndale, we all have reason to be encouraged.