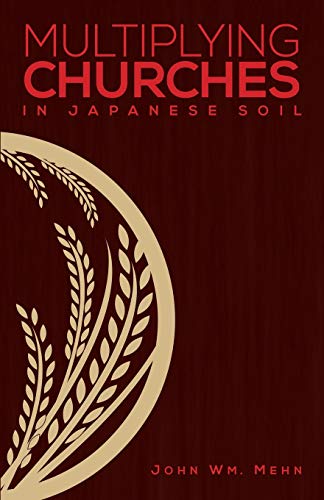 Written by John W. Mehn Reviewed By Will Brooks
Mission and Culture

Planting churches in Japan is hard. Despite centuries of missionary efforts in Japan, the church has little fruit to show for its efforts. In an attempt to investigate and remedy this situation, John Mehn wrote Multiplying Churches in Japanese Soil. Mehn has lived in Japan for more than thirty years and is well versed in the history, culture, and traditions of the Japanese people.

In the final three chapters, Mehn examines several contemporary models of church planting in Japan. These models include target penetration, network planting, simple church, cell churches, multisite churches, and sending churches. For each, he not only explains the model but also gives examples of churches in Japan utilizing that model. He then outlines how certain church leaders in Japan are developing leaders in their churches. Common characteristics of these leaders include a God-given ministry vision, a risk-taking faith, a view of the church as a dynamic sending community, an emphasis on the development of lay people for ministry, a relational approach to leadership through encouragement, and an aggressive implementation through practical ministry. Finally, he presents challenges for the future of church planting in Japan.

Mehn does a tremendous job outlining Japanese history and culture. His treatment of religion in Japan and the need for adequate contextualization is worth the cost of the book. He explains one of the challenges to contextualization, “Japanese culture is often hard to determine, as the Japanese people fail to be very self-reflective of their culture and are reticent to speak to people they don’t know well regarding their cultural views” (p. 15). In a later chapter, he laments that unhealthy contextualization has led the church to overemphasize the clergy/laity divide, see the church more as an institution than a gathering of people, and fail to engage the local community (pp. 27–35).

His treatment of spiritual warfare is likewise helpful. He explains that it does not take long in Japan to sense the spiritual darkness surrounding the people. And yet, Mehn displays a biblical perspective by writing, “Our task is preaching the truth of the gospel to ourselves and others” (p. 48). He continues on the issue of prayer, “Rather than praying against spirits, the kind of biblical prayers needed are that God would open the eyes of people in darkness and lead them in repentance for their rebellion against him” (p. 48). An additional strength of the work is that he does not advocate only one model for church planting in Japan but gives numerous models for consideration.

While Mehn’s desire to see more churches planted in Japan is admirable, his overdependence on church planting movement (CPM) methodology hinders the book’s effectiveness. With no support except a quote from Winter and Koch, he asserts, “Only multiplying new communities of believers saturating the country will accomplish the task of displaying the missionary nature of the church in every community” (pp. xix–xx). He criticizes the church’s over-institutionalization and the lack of lay leader ministries. But even if these issues are addressed, it is difficult to see how multiplication could happen “naturally” (p. 127) in a context as structured and regimented as Japan. In the same way, in a culture so deeply committed to sacred space, it is difficult to understand how cell churches and small groups can flourish.

To be fair, Mehn’s approach is not as extreme as other CPM-type methods. Though he celebrates the need for multiplication, the churches in his research planted a new church at least three times over a twenty-year period. Such growth is hardly characteristic of CPM methodology, whose advocates claimed that CPM churches reproduce at the rate of once per month. CPM methodology seems only to affect his analysis and description of the church and its leaders. For example, church is only defined as a “dynamic sending community” (pp. 125–29). This view is not wrong, per se, but it misses key elements of what makes a healthy church, such as biblical preaching, teaching, worship, and prayer.

Along the same lines, the necessity of strong biblical and theological foundations is sadly lacking from his discussions of church and leadership. He does mentions areas where the Japanese church needs greater theological reflection (pp. 13–14). However, when he addresses needs of existing churches (p. 26), contemporary church planting models (p. 99), or church leaders, theology is not listed as a priority. Mehn fails to recognize that unhealthy contextualization flows out of unhealthy interpretation. If churches are going to live out the gospel and be a light to their communities, they need to know the Bible and how to interpret it. Strategies and methods for multiplication simply are not enough to lead the church to health for generations to come.

While Mehn’s work has some weaknesses, we can be thankful that this book advances a needed discussion on the necessity of church planting in an area of great need. Those working in Japan will certainly learn much from this book, but even church leaders in other locations will benefit from reading about the challenges and opportunities for church planting in a place that has long resisted the gospel’s life-giving power.