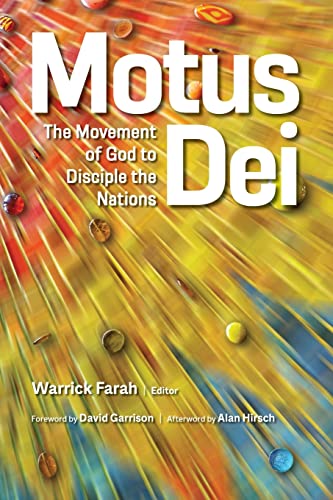 Motus Dei: The Movement of God to Disciple the Nations

Motus Dei: The Movement of God to Disciple the Nations studies the phenomenon of global Christian movements through the insights of thirty authors whose diverse experiences and areas of expertise contribute to its content. The book describes the phenomenon of movement as when “more than a thousand individuals have chosen to become followers of Jesus Christ or more than a hundred churches have been planted in the third generation” (p. 297). The concepts of rapid multiplication, indigenous house churches, and transformation are also commonly included in the understanding of movement (p. xiii). The book asserts that movements need to be studied in order to elicit common factors contributing to global movements and to consider how to more effectively facilitate them (p. xv).

Motus Dei is organized into five parts that examine movements from different angles. Part 1—“The Big Picture of Movements”—provides an overview. Part 2—“Missional Theology of Movements”—examines the biblical and theological basis for movement methodology. Part 3—“Movement Dynamics”—includes various topics such as ethnic worship in movements, social media as a spiritual interest filtering tool, and diaspora populations as both an opportunity and challenge for movements. Part 4—“Case Studies”—presents contemporary insights into the growth and challenges of movements in four locations provided by teams of local leaders and outside authors. The final section, part 5—“Movement Leadership and Next Steps,” offers practical advice to those seeking to facilitate movements or lead workers toward a movement mentality.

Motus Dei has several strengths and some weaknesses. One strength is that the book deliberately addresses criticisms of movement thinking and methodology rather than sidestepping the critiques that have been levied against it. Common objections to movements are reviewed by David Coles in chapter 3 and are addressed less directly by other authors.

A second strength is the wide range of topics presented in the book. Of particular importance is the section on theology, which helps to undergird the understanding of movements and to address some criticisms. Craig Ott offers a balanced investigation of the growth of the church in the book of Acts. The selected case studies present grass-roots information about current movement dynamics and practices. And the chapter by Pam Arlund and Regina Foard outlines an important but often-ignored topic: the role of women in building movements. These various topics contribute to a robust presentation of contemporary movements.

Third, the variety of authors is a strength of Motus Dei. The book includes contributions from both scholars and practitioners. In addition, since movements are occurring primarily in the Global South, the intentional inclusion of many non-Western authors adds strength to its exploration. The various authors write from different perspectives that serve to complement and temper one another. One key example of this can be seen in the way that the book defines movements as exhibiting rapid growth (p. xiii), while the authors also wisely caution that “rapid growth is not a goal,” that movement principles do not guarantee quick success (p. 40), and that patience is needed in ministry (p. 225). Though Motus Dei endorses movement methodologies, the authors recognize that it is God—not humans—who determines if a movement happens (pp. 40–41, 104). This helps address criticism that simply following movement principles will produce movements.

One weakness of the book is that authors at times overstate their case for movements. For example, in describing house church networks, David Lim writes, “These contextualized, holistic, and transformational simple churches are truly indigenous: self-governing, self-supporting, self-propagating, and self-theologizing. They are planting [house churches] that can be copied by future generations of Christ-followers, so they intentionally avoid denominational churches and missions, which have too often been uncontextualized and have almost always produced marginalized Christ-followers separated from their communities” (p. 89). This quote demonstrates the tendency to praise house churches while criticizing and avoiding traditional churches. Other contributors to the volume echo Lim’s suspicions regarding conventional churches and traditional multiplication methodologies (e.g., p. 236). Yet members of the body of Christ are to value each other despite differences. Lim’s chapter does not encourage readers to acknowledge the gospel-reality of unity between traditional churches and house churches. Fortunately, other authors do recognize the validity of God’s historical work outside of movement methodologies (e.g., pp. 284–85). Richard Grady, for instance, highlights the need to improve relationships between “longer established churches and emerging kingdom movements” (p. 334).

A second weakness is the absence of clear definitions of key terms. The concept of “church,” though discussed in the book, should be more clearly defined. Since the definition of a local church is important in understanding, identifying, and counting movements, it is helpful to include an example of how a movement determines when a Bible study becomes a local church. Grady identifies the need for a “more nuanced understanding” of terms such as “church,” “discipleship,” and “conversion” (p. 335). Specific definitions are not offered, however.

Although the financial aspect of movements is referred to briefly in the book (e.g., pp. 27, 240), this topic requires more attention and precision. Another topic which greatly influences movements and deserves further discussion is the manner in which individuals are discipled, trained, and equipped. Due to the prominent roles that Discovery Bible Studies and mentoring play in laying the foundation for movement growth, one would hope to find a more robust discussion about how these methods facilitate discipleship, leadership training, and multiplication.

Although Motus Dei has weaknesses, it accomplishes its purpose of providing diverse research to further the global conversation on Christian movements. As such, Motus Dei is beneficial for those currently involved in movements as well as those desiring to understand more.