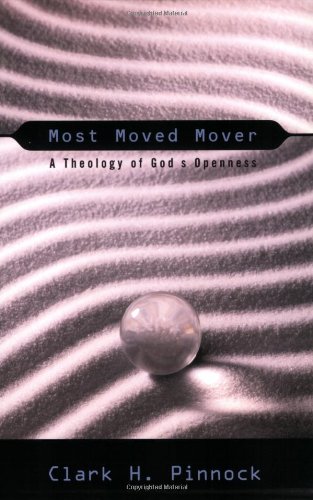 MOST MOVED MOVER: A THEOLOGY OF GOD’S OPENNESS, DIDSBURY LECTURES 2000

In 1994, five American professors of theology caused a furore when they published a new ‘biblical’ view of God (Clark H. Pinnock et al., The Openness of God: A Biblical Challenge to the Traditional Understanding of God, Carlisle: Paternoster, 1994). This latest offering from Professor Pinnock is, in part a response to the controversy generated by the earlier volume, and in part a further exposition of the so-called ‘open view’ of God (also known as ‘free-will theism’).

There is a lengthy introduction which sets the scene. Pinnock then proceeds to outline his views in four chapters, focussing in turn on the biblical, historical, philosophical and experiential aspects. He thus aims to ground the ‘Open View’ in Scripture, tradition, reason and experience, whilst rightly acknowledging that Scripture must be foundational (19). As regards content, three things stand out. First, love is central and most basic to the character of God (for instance on p. 3). Indeed, love is God’s essence; all his other attributes are non-essential, suggesting that God can be less than almighty, all-knowing, all-holy and still be God. Second, God has freely limited himself by creating humans with wills of their own. Human responsibility indicates that we have libertarian freedom, which is incompatible with God being totally sovereign over all the details of creation (e.g. p. 115). Thus, sometimes things happen which God desires not to happen, but because we are free he is powerless to intervene. Third, because humans are free agents we can surprise God, hence he cannot have exhaustive foreknowledge; if he knew beforehand what we would do, we would not truly be free. Whilst God may be able to make educated guesses about how things might turn out, he cannot know the details for sure (e.g. p. 3—Pinnock denies the possibility even of middle knowledge). Pinnock claims this is clearly demonstrable from the Bible, in contrast to the traditional view, which is philosophically driven, resulting from the unhealthy influences of Classical Greek thought.

What is good about this book? Pinnock is to be commended for his self-confessed desire to be biblical (19), and for his concern for what he calls a good ‘existential fit’ (ch. 4). Theology that is not biblical is a waste of time. Theology that does not conform to reality and issue in changed lives is not worthy of the name. Nevertheless, there are significant flaws in his treatment that serve totally to undermine his intentions.

Chapter 1 is intended to provide the biblical foundations for the book as a whole, yet what is striking is the paucity of scriptural references. Even when Pinnock cites a Scripture reference, he rarely quotesScripture, or refers to it other than in passing. There is certainly no detailed exegesis, nor indeed any evidence of sustained interaction with the biblical text. Rather, he relies on context-less proof-texts of the type he so decries in others. In every case, the verses to which he refers are patient of other interpretations which harmonise better with the rest of the Bible’s testimony that God is exhaustively sovereign and gloriously unchanging, whilst in no way diminishing the reality of human responsibility, or his tender love for us.

In addition, Pinnock demonstrates no grasp of the flow of salvation history. Jesus is apparently God’s plan B, perhaps even plan C, following the unforeseen failures of Adam and Israel (37, 41). This in spite of the fact that we were chosen in Christ before the foundation of the world (Eph. 1:4), that he is the lamb who was slain before the foundation of the world (1 Pet. 1:19f; Rev. 13:8) and that God’s eternal plan was to bring all things under one head, even Christ (Eph. 1:10).

Chapter 2 engages with the historical issues. However, again the engagement is very weak. Indeed, throughout Most Moved Mover the interaction with the classical view of God is shoddy to say the least. Pinnock often resorts to caricature (e.g. Calvin apparently believed God was ‘an all controlling despot who can tolerate no resistance’, in contrast to the biblical picture of a loving Father, (4)). He imputes ungodly and dishonourable motives to John Piper’s defence of a compatibilist view of freedom (p. 115, n. 6). There is frequent use of slanted language and parody: for instance on page 41: ‘God is not a cosmic stuffed-shirt, always thinking of himself.’ But who would say that he is? On page 27 he contrasts ‘deadening immutability’ with ‘constancy of character that includes change’, ‘raw omnipotence’ with ‘sovereignty of love’, ‘know-it-allomniscience’ with ‘wisdom which shapes the future’ (italics mine). And does Reformed theology really view God’s unity as ‘a mathematical oneness and ignore the triune relationality of Father, Son and Spirit as is implied on page 27? In view of this, I trust Pinnock will excuse a degree of incredulity on my part when he complains at the harsh treatment the ‘open view’ has received from some quarters and pleads for us to ‘respect one another as believing scholars’ and ‘refrain from caricaturing what the other is saying’ (181).

Philosophically, Pinnock assumes that human freedom includes absolute power to contrary. We have the freedom to resist God and to a certain extent thwart his purposes. We also are capable of responding positively to him. (It should he noted in this respect that Pinnock’s doctrine of sin is far from clear.) He claims that the love of God is foundational to the ‘open view’. However, in reality his presupposition that exhaustive divine sovereignty is incompatible with genuine human responsibility appears to be more important, not least in defining what it means for God to love us. This, however, merely begs the question of what God’s love is really like. The assumption that God’s exhaustive sovereignty renders humans not responsible for their actions is simply untrue (cf. e.g. Gen. 50:19f; Lev. 20:7f; Is. 10:5ff; Acts 2:23; Phil 2:12f). Nevertheless, it leads Pinnock not only to his own view of divine-human relationships, but also to some of his serious misunderstandings and caricatures of the views of traditional theology e.g. that Reformed Christians believe that humans are not truly responsible for sin because they believe God is utterly sovereign; he must therefore be responsible for ‘every flawed: it is unbiblical, illogical and flies in the face of 2000 years of godly theological reflection’. Thus, it is also pastorally disastrous. What is the point praying for the conversion of my friends if God is unwilling to over-ride their free choice to reject him and so damn themselves to hell? What kind of security can I have if even God does not know the future? If God is changing, how can I be certain that his love for me won’t change? How can I be sure that heaven exists, or that if it exists it really will be heaven? After all, if I can freely choose to reject God now, who is to say I won’t make that choice in eternity. But if that were the case, then surely heaven would be hell indeed! Father, over-ride my free will and save me from myself!

There is much more that could be said in criticism of this volume. How should evangelical students, teachers and pastors react to it? Professor Pinnock fears that the ‘open view’ may never gain wide acceptance. Evangelicals are duty bound to work and pray to ensure that his fear becomes reality.