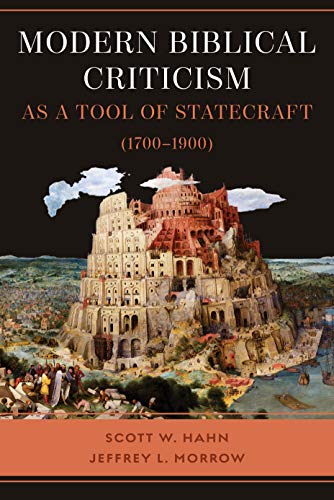 This well-written and important book tells a familiar story: how Western civilization went from venerating the Bible to doubting much of what it claims. The beginning of this story was told by Scott Hahn and Benjamin Wiker in their prequel, Politicizing the Bible: The Roots of Historical Criticism and the Secularization of Scripture, 1300–1700 (New York: Herder & Herder, 2013). We now await the end of the story in the sequel to the book under review, which promises a volume showing (among much else) how, when it comes to interpretation of the Bible, “the universities were transformed in the modern period into the secular magisterium that they function as now, in our present day” (p. 229).

In Modern Biblical Criticism as a Tool of Statecraft (1700–1900), Jeffrey L. Morrow replaces Wiker as co-author with Scott Hahn. As volume 2 in this trilogy, it brings the narrative up to about the end of the nineteenth century, when the influence of Julius Wellhausen in Old Testament and Heinrich Holtzmann in New Testament was hitting its stride, and when Robinson Smith was mediating the results of biblical scholarship in Germany to the English-speaking world (though this process was underway long before Smith). It tells the story with the twist implied in the second half of the title. For many interpreters, the Bible comes to be no longer a revelation from God; it rather serves as a tool to support the political meaning, or irrelevance as the case may be, assigned to it by secular overlords, individual and institutional, enforcing the will of the polis rather than proclaiming the gospel of the ekklesia.

As one would hope, this history draws heavily on the works of other scholars with specialties in this or related fields of study: William Baird, Colin Brown, Anders Gerdmar, J. C. O’Neill, Henning Graf Reventlow, John Rogerson, Thomas Römer, Magne Sæbø, and Rudolf Smend, to name major players. Eighty pages of the book are devoted to bibliography and indexes. The index of names runs to well over five hundred. There are 742 footnotes, some of them lengthy, on just 225 pages. Hahn and Marrow have read deeply and widely.

Chapter 1 reviews high points of the earlier study, Politicizing the Bible, tracing a line from Marsilius of Padua and William of Ockham through (somewhat incongruously) John Wycliffe to Machiavelli and Luther, who is accused of “handing over the temporal order” to non-church rulers, a rather limited interpretation of this Reformer’s contribution. A downward spiral (which is construed as the march of progress by most today) continues with England’s split from Rome under Henry VIII and then the work of Descartes, Hobbes, and finally Spinoza. Chapter 1 ends by previewing the eight chapters of the book under review. Hahn and Marrow argue that historical criticism as it emerged over time was never, either in design or in execution, a neutral enterprise aiming to grasp and pass along what the Bible says. Rather, and increasingly during the two centuries surveyed, scholars were influenced most of all, not by the text and context of the object they were interpreting (the Bible), but by “specific philosophies, theological leanings, and political motivations” (p. 23). It is the political dimension, Hahn and Morrow find, that has been most overlooked in previous research. They wish to show how biblical scholarship as it gradually took shape served the interests of the political order of the critics’ respective times and social locations. A secular order replaced the sacramental order of previous times.

Chapter 2 explores how classical scholarship in eighteenth century Germany set the stage for the biblical criticism that followed in its wake. An ideal of disinterested scholarship arose that sought to draw resources from ancient Greece and Rome for the building of German social institutions. Classical antiquity was to be studied “completely separate and autonomous from theology and Christianity” (p. 46). This movement had a strong effect on the University of Göttingen and future scholars like Johann Salomo Semler, Johann David Michaelis, and Johann Gottfried Eichhorn. Chapter 3 centers on Semler, with a lengthy prelude devoted to Johann Lorenz Schmidt and the Wertheim Bible, which was never completed but which contained Schmidt’s translation of the Pentateuch with skeptical and rationalist commentary reflecting the views of Richard Simon and Spinoza. Schmidt’s work is said to have laid the groundwork for Hermann Samuel Reimarus and his deist approach to Scripture, which many view as the beginning of Life of Jesus studies. The remainder of chapter 3 is devoted to Semler (pp. 60–69) and his fateful severing of the link between theology and the Bible.

Chapter 4 turns to a figure who, in Hahn and Morrow’s telling, was even more influential in transforming the scholarly study of Scripture: Michaelis. He was “a key figure in what we might call the secularization of biblical exegesis” (p. 73; cf. p. 95). He “transformed the study of the Old Testament into the study of the dead Hebrew classical civilization,” parallel to that of the equally dead pasts of Greek and Rome (p. 95). This move also paved the way for anti-Jewish sentiments to find scholarly support (p. 94), in a different way but with an effect no less deleterious than Luther’s screeds against the Jews had two hundred years earlier.

In chapter 5, Michaelis’s student Johann Gottfried Eichhorn takes center stage. “His work was pivotal both in the history of what would come to be called the Documentary Hypothesis of Pentateuchal origins, but also in the development of theories concerning the composition of the Gospels” (p. 99). Building on the work of the French scholar Jean Astruc, Eichhorn, along with his student J. P. Gabler, introduced the idea that much of the Bible was mythical—it describes how primitive people perceived things, though from a modern viewpoint those things might not have happened in ways we would perceive or affirm. Eichhorn applied his theories and views to the New Testament too, applying surreptitiously a thoroughgoing rejection of miracles in favor of myth. He championed a scholarship that he hoped would use history to bring about “the progress of human culture” and “the perfection of human nature” (pp. 117–18).

Chapter 6 highlights the work of Wilhelm Martin Leberecht de Wette (along with Romanticism and a number of lesser scholars like Alexander Geddes, Hermann Hupfeld, and Heinrich Ewald). Hahn and Morrow show how skepticism toward a realist and theological reading of the Bible hardened, exacerbated by social and political pressures placed on scholars in their capacity of civil servants in state-supported universities. There was “an increasing drive away from explicitly theological exegesis and more towards exegesis as secular Wissenschaft [scholarship]” (p. 151). Chapter 7 traces a similar process in the field of New Testament studies, moving from Hermann Samuel Reimarus to Gotthold Ephraim Lessing and Johann Jakob Griesbach and concluding with substantial treatments of F. C. Baur and David Friedrich Strauss. This part of the story has been retold frequently from several angles, but Hahn and Marrow bring in fresh perspective and detail along with the fruit of recent scholarship.

Chapter 8 concludes, as noted above, with treatments of Wellhausen and Holtzmann (along with Robertson Smith). Still today, the results of biblical scholarship as taught “across the globe typically mirror the nineteenth-century work of these scholars” (p. 188). This is “despite the fact that few specialists in the field actually follow these original formulations in every detail!” (p. 188). Chapter 8, like previous chapters, provides evidence for the book’s thesis that biblical interpretation was becoming distant from (and even hostile to) the way the church (in this book meaning the Roman Catholic church) read and taught the Bible.

A brief review cannot do justice to the richness and detail of this book. It amply fulfills its aim of providing in historical form “a criticism of criticism” (p. 229). The authors state, “Scripture is theology’s soul, and it is fundamental to the Christian life” (p. 229). Confessing Christians of all stripes should agree with that. This volume, along with the earlier one, provides a basis for the provocative assertion that the two books together “answer the question of how we got to the twenty-first century where Bible scholars in Protestant, Catholic, and public colleges, universities, and seminaries—across the globe—take for granted methods that were forged in the anti-Church, anti-Catholic, and anti-Semitic theo-political conflicts of the fourteenth though nineteenth centuries” (p. 229).

No history that attempts so much will please all readers at every point. I do not share the authors’ loyalty to the papacy or their high view of Roman Catholic tradition (which they sometimes capitalize). The argument can be made that the Bible’s saving message under the Catholic magisterium is suppressed as severely as it is under the secular magisterium documented in this book. This book completely skips the substantial pushback and correction that “modern biblical scholarship” has received in all generations from numerous quarters by pietist, confessional, and evangelical scholarship. The book could give the impression that there have been basically just two main approaches to the Bible: the historical critical, and (in this book constantly in the background) the faithful Catholic.

But the authors seek primarily to highlight the ways and extent to which modern biblical criticism developed, functioned, and grew into “a tool of statecraft” in the 1700–1900 era. In this aim they learnedly and valiantly succeed.