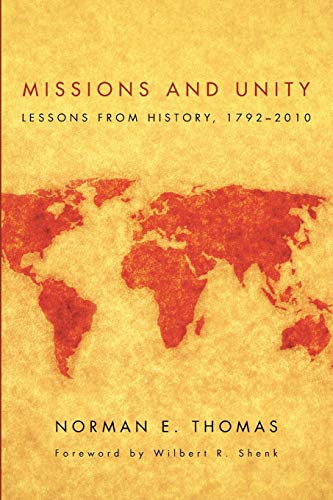 The suggestion that world missions have helped to advance the collaboration and unity of the churches engaged in the enterprise is not, in itself, a radical or startling proposal. There is no reader of this journal who will, a priori, reject this idea as a working hypothesis. The education abroad of the children of missionaries has required cross-denominational and intra-mission collaboration on a large scale; mission aviation bush planes have regularly transported members of distinct mission agencies on the same flights. Here is sufficient collaboration and unity to demonstrate that there is substance to the contention that mission advances unity. Yet this is not, very fully, what Norman E. Thomas, emeritus professor of World Christianity at United Theological Seminary in Dayton, OH had in mind in researching and writing Missions and Unity (hereafter M&U).

It is the contention of the irenic Thomas that missionary exertion, since the departure of William Carey for India in 1792, has had embedded within it an impulse not only for the type of pragmatic missionary collaboration mentioned above, but as well an impulse for ever-closer union of Christians and of their churches. The march of missionary history has, to put it plainly, also been a march towards always-closer relations between the various church bodies engaged in that march. In his introduction, Thomas outlines thirteen possible expressions of Christian unity; the actual physical union of Christian denominations is but one of those described (p. xxiii). The book therefore is full of interest and latent possibilities for everyone interested in the history of missions, of ecumenical relations, and of world Christianity.

Yet Thomas's claim that pursuing world missions advances collaboration and unity is one that the conservative evangelical reader can test only with great difficulty. The disconcerting fact is that the historical trajectory Thomas marshals in support of his claim that missionary exertion since Carey inevitably advances the global unity of the churches is a trajectory from which a very high proportion of conservative evangelical Christians and their churches and mission agencies in the western world have stood apart since 1910. The global Missionary Conference, held in Edinburgh in that year was the last world missionary consultation to encompass the full range of all Protestant churches and missionary agencies. Theological tensions, already germinally present at Edinburgh, would become so pronounced in the post-WWI context that conservative evangelicals judged that the necessary consensus about the gospel-required as the basis for further comprehensive missionary consultation-was so lacking that further unrestricted conferencing was imprudent.

All this to say that Thomas' building of a historical case that missions promotes Christian unity is hobbled by his needing to admit (and this he does candidly) that global missionary consultation and coordination since 1910-whatever it may have eventually gained through the post-WWII inclusion of Roman Catholic and Eastern Orthodox representatives-was lost through the steady diminution of the conservative evangelical voice. Edinburgh's continuation in the form of the International Missionary Council (which met at regular intervals following WWI) and the eventual merger of that body with the fledgling World Council of Churches in 1961 was a continuation in which steadily fewer evangelical voices were heard. In this important respect, at least, the pursuit of world mission did not in itself maintain or advance any unqualified collaboration or unity effort. It might even be said to have served to set unity back through its disregard of theological boundaries.

Now Thomas, to his credit-because from the beginning of this volume he acknowledges that physical and organic church union is not the only unity worth discussing-provides himself with a modus operandi for giving ample consideration to the ways in which twentieth-century world evangelicalism, largely standing apart from global ecumenism, carried forward the principle of collaboration and unity in mission through agencies of its own design. It is Thomas's view that through the post-WWII establishing of the World Evangelical Fellowship (extensively a reinvigoration of the moribund World Evangelical Alliance founded at London in 1846) and the various global evangelical congresses commencing with the Berlin Congress on World Evangelism (1966) and the Lausanne Congress on World Evangelization (1974), the global evangelical community exhibited (albeit in its own manner) the ways in which the concerted pursuit of world mission drives collaboration and unity of purpose among Christians, Christian agencies, and churches.

I wish to praise this volume in two definite respects. First those who have consulted Ruth Rouse and Stephen Neill's The History of the Ecumenical Movement have lamented the gradual diminution of the evangelical voice in that history, focused as it is on the trajectory that led to the founding of the World Council of Churches in 1948. Thomas knows that story; he also knows that it is not the whole story of collaborative efforts among the Christians of the world. Thomas has aimed at inclusion and succeeded. Thus one can find here reliable accounts in M&U of both the founding of the American Interdenominational Foreign Mission Association (1917) and Evangelical Foreign Mission Association (1945). By the same token, one finds as well in M&U extensive consideration of the contribution of Roman Catholic Second Vatican Council thinking on the theology of religions and its bearing on the question of the finality of the Christian message. Inclusion is the operative term.

The work is also characterized by generosity of treatment. No one will accuse Thomas of pressing the argument that nothing short of the organic union of all the churches will represent the ultimate triumph of the unity in mission story he has been concerned to relate in such detail. From the beginning, he has insisted that there is a multiplicity of ways in which Christian unity through mission can be realized.

Yet the strengths of this book are also its Achilles heel. Having read Thomas closely, I cannot recall a single theological judgment rendered in the entire work. The story of Missions and Unity contains no villains, no dark characters, no persons whose stated convictions put them beyond the pale of acceptable missionary or theological thinking. But the twentieth-century history of mission included Pearl Buck (1892-1973), who scandalized devout Christians by insisting that she and other American missionaries were not in China to seek conversions. It included William Ernest Hocking (1873-1966), who reported in 1932 after a year's global tour that American missionary effort would be best focused on education and welfare rather than the evangelization of native peoples. It included Philip A. Potter (b. 1921) who, while World Council of Churches secretary for World Missions and Evangelism, framed a program seeking the violent overthrow of the admittedly racist government of South Africa. This, because it passed for “Mission and Evangelism,” led to the withdrawal of groups as diverse as Irish Presbyterians and the Salvation Army from the World Council. So much for “unity in mission.”

In the end, Thomas is to be faulted not for spotty research or forgetting significant detail, but for steadily supporting the notion that the Christian message contains little or nothing that is nonnegotiable. On his understanding, the world Christian movement, finding unity in its taking a reduced, non-dogmatic faith to the world in the end need exclude no one. And so, while the gracious Thomas includes accounts of twentieth-century world evangelicalism in this inclusive tale, he has at the same time reminded us of the reasons for which we have (by and large) stood apart from the mainstream he means to extol. Yet I caution: do not dismiss this book cavalierly! Thomas can help the evangelical reader by his sketching out an important story during the last decades of which evangelicals have been outsiders looking in. This reviewer doubts that we can properly understand the tension points evident in the recent Cape Town 2010 conference (meant to carry forward the concerns of earlier Lausanne consultations) without it.